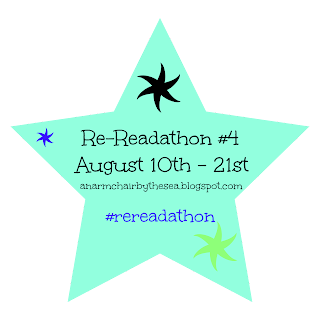 If you follow me on twitter you'll have seen me tweeting all my favourite re-reads and books I'm most looking forward to re-reading and asking others to do the same, and here I'm collating them to make one big list to give you TBR inspiration for the Re-Readathon if you need it, and also just as a list of books people think are awesome, which will hopefully remind people of books they read years ago and had forgotten about or bring to their attention books they'd never heard of but which sound interesting! All the titles are affiliate links to Wordery (meaning if you buy through them I'll get a small commission which I'll be very grateful for!) who are independent booksellers and offer FREE worldwide shipping!

Throughout Re-Readathon 4 I'm asking people to tweet their favourite re-reads or books they're most looking forward to re-reading using #rereadathon, whether or not they're taking part in the event. At the end (August 21st) everyone on the list (regardless of whether or not they're participating in the event!) will be entered to win a book of their choice from Wordery. The giveaway will be open internationally and there may be two prizes depending on my finances, so keep the tweets coming!

If they're uncredited, it means they're my own recommendations, and some of those other people recommended were also on my list! I've subdivided by genre in a very general way - I didn't want to get too caught up in what fell into which group!

A Wrinkle in Time by Madeleine L'Engle (@spritewrites)
Anne of Green Gables by L.M Montgomery

Pride and Prejudice by Jane Austen (@RachaelFryman, @craykayyy)
Sense and Sensibility by Jane Austen
The Odyssey by Homer (@AlineOhanesian)
To Kill a Mockingbird by Harper Lee (@Hootowl14)
Twelfth Night by William Shakespeare (@brittany_pelaia)

The Blue Sword by Robin McKinley (@spritewrites)
The Borrower by Rebecca Makkai
The Crow Road by Iain Banks (@custard1980)
The Handmaid's Tale by Margaret Atwood
The Hero and the Crown by Robin McKinley (@spritewrites)
The Hitchhikers Guide to the Galaxy by Douglas Adams (@gotmybookblog)
The Long Way to a Small, Angry Planet by Becky Chambers
The Lord of the Rings Trilogy by J.R.R Tolkien
The Mistletoe Bride by Kate Mosse (@LibMrs)
The Night Circus by Erin Morgenstern (@BookaholicBabe)
The Ocean at the End of the Lane by Neil Gaiman

The Secret History by Donna Tartt
Thursday Next Series by Jasper Fforde (@spritewrites)
Troy:Lord of the Silver Bow by David Gemmell

I'm going to be keeping hold of this list for inspiration in future events! If you'd like to sign up to re-read with us we start on Wednesday and all the details are here.
Posted by anarmchairbythesea at 10:00