A while ago I wrote about how I planned to read the entire series of Swallows and Amazons books by Arthur Ransome this summer. Then I wrote about how I'd triumphantly finished Swallows and Amazons and how it was just as great as I expected, and I amazed everybody (myself included) by carrying straight on and ploughing my way through Swallowdale, the second book in the series.

I thought I might have read Swallowdale as a child, but having read it now I don't think I ever have done. It's set in the summer holidays one year on from the events of Swallows and Amazons and features the same cast of characters as the previous book, but pretty much the whole book takes place in Swallowdale, a valley discovered by the crew of the Swallow after they have tragically wrecked their boat on a rock just offshore, meaning they have no means of returning to Wild Cat Island. While they are waiting for the boat to be mended, they move their camp to Swallowdale instead and commence great adventures, including mountain climbing, narrow escapes from terrifying Great Aunts and another encounter with the charcoal burners who live in wigwams and who also appear in the first book.

You could call Swallowdale just more of the same, and it is in the same way that I'm expecting most of the series to be about kids having adventures in boats. Because that's what they are, and I personally have no problem with that. The only thing that really annoyed me about this one was how randomly everybody now calls the baby known as Vicky in Swallows and Amazons Bridget. Apparently, Bridget is her actual name and she was only called Vicky because she bore a resemblance to Queen Victoria, and come to think of it I might sort of vaguely remember this being mentioned like once in the first book, but still I was so confused. I was sat on the bus staring out the window going 'who the hell is Bridget?? Where's Vicky gone?!'.

Aside from that, there was lots more adventuring and exploring and leaving trails for themselves as well as general survival and the discovery of a super awesome cave they then used as a larder and the arrival of Peter Duck! Helpfully I now know that Peter Duck is a figment of Titty's imagination, and a character who featured in a story which was told 'at Christmas'. I did miss the Amazons, who were unable to join in a lot of the adventures due to having to stay home wearing their best dresses and reciting poetry for their horrendous Great Aunt, who wouldn't even let Nancy be called Nancy! Consequently, getting them (and Captain Flint) away from the Great Aunt featured prominently through about three quarters of the book, and also added a really nice little time pressure onto everything, as it's difficult to do things properly when you have to worry about people being home by 5 for tea.

As with Swallows and Amazons, lots of the geography of Swallowdale was inspired by things in the region where Ransome was living at the time. I just put it in as general interest (mostly for Katie, in case it helps inspire your holiday at all!) that Kanchenjunga, the mountain that they climb, was inspired by Old Man of Coniston, just in case you decide you have the need to climb a mountain, and if you do I want photos!

If you haven't read Swallows and Amazons, I really want to know why not, and if you read it and like it, I would recommend you keep going. Especially if you're reading it to kids. Swallowdale was published in 1931, and to me, aside from the lack of electronics and general hysteria about the safety of children, it is wonderfully undated. I've just started Peter Duck, which the previously mentioned lovely Katie actually went out of her way to look for in bookshops where she lives and posted to me. How amazing is that?? I'm already loving it :-)
Posted by anarmchairbythesea at 20:15 3 comments: 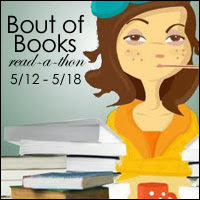 So I'm the worst blogger in the world at the moment and there are many reasons for that, but I miss blogging so I've decided to hop back into it with Bout of Books :-) As ever, I'm going to make an overly ambitious pile of things I'd like to read and then probably fail to finish all but one, but never mind.

Unfortunately one of the reasons I've not been around much is that I've been diagnosed with gestational diabetes, which is fine but has meant lots of extra appointments and scans and changes to diet, so my snack pictures won't be up to much this time around, but never mind! I know you're really here for the books anyway!

If you want to sign up, you can do so here.

This week I will be posting a bit. I've finished Swallowdale and will be posting my review and also doing a bit of a bookcase dissection on Benji's bookcase. He's getting a kid sized beanbag chair tomorrow and we're going to make him a little reading corner in his room, it will be awesome.
Posted by anarmchairbythesea at 09:20 7 comments:

Swallows and Amazons is one of my childhood favourites. While I was reading it this time I had a conversation with my sister where we were talking about it being a bit dated, and she said 'well it doesn't matter, because who wouldn't rather live in a world where you could safely send your kids off to camp on an island and sail about in a boat and not worry about them being kidnapped or whatever?'. She makes a good point, and I think that's a huge part of the appeal this book still holds for me. When I was a kid, it was full of the kinds The of things I wanted to do (and to be fair to my parents, we did a lot of them, just in a slightly more supervised capacity), and now it's full of the stuff I'd love my kids to be able to do.

For those who don't know, Swallows and Amazons is about four siblings - John, Susan, Titty and Roger - who sail about in a little boat called Swallow one summer and go camping on an island in the middle of a lake where they are staying for the summer. On the island they encounter the two woman crew of the Amazon, 'pirates' Nancy (her real name is Ruth, but pirates are Ruth-less. love it) and Peggy Blackett and have all kinds of adventures together.

Can we just talk for a moment about the fact that Enid Blyton's Faraway Tree series has been reissued with half the kids' names changed because apparently children today can't cope with people named 'Dick' and 'Fanny', but Titty is still happily allowed to be called Titty? Weird double standard? I don't get it. Aside from that (and the fact that Ransome continually refers to the poor baby as 'fat Vicky'. She's a baby! She's supposed to be fat!) it stood up really well to rereading.

I was a little bit worried that, having committed myself to reading the entire series of 12 books this summer, I'd get through Swallows and Amazons and really hate it, but no. I still love it. It still made me want to go camping immediately and make campfires and go exploring. The kids didn't annoy me particularly and there was a lot at the end that I had no memory of, possibly because my overriding memory is of the film rather than the book. If you have kids and you want to encourage them to go outside and play and use their imaginations, you should read them this book.

I've already started Swallowdale and am loving it so far. The only bad thing is that it means the ever-elusive Peter Duck is next and I can't get my sister's copy till the middle of May ;-( Anybody want to lend me a copy?
Posted by anarmchairbythesea at 13:56 5 comments:

Too many years ago, when I joined The Classics Club I put the entire series of Swallows and Amazons on my list. As a child I was obsessed with Swallows and Amazons and wanted nothing more than to sail off to an island in the middle of a lake and leave my parents behind, and because of this I decided I couldn't possibly start reading the series without owning it, so I've been collecting from second hand bookshops and charity shops pretty much constantly for the past two years, and finally, finally I have nearly the whole series.

I say nearly, because Peter Duck has been completely eluding me. I bought it for my sister in a charity shop a while ago, convinced it wouldn't be too hard to find another copy for myself. I was wrong, and I still don't have it, but I'm just going to borrow her copy, because the weather is nice and I'm teaching Benjamin about nature and it feels like the right time to start reading. I don't want to wait anymore! Anyway, here's my collection: 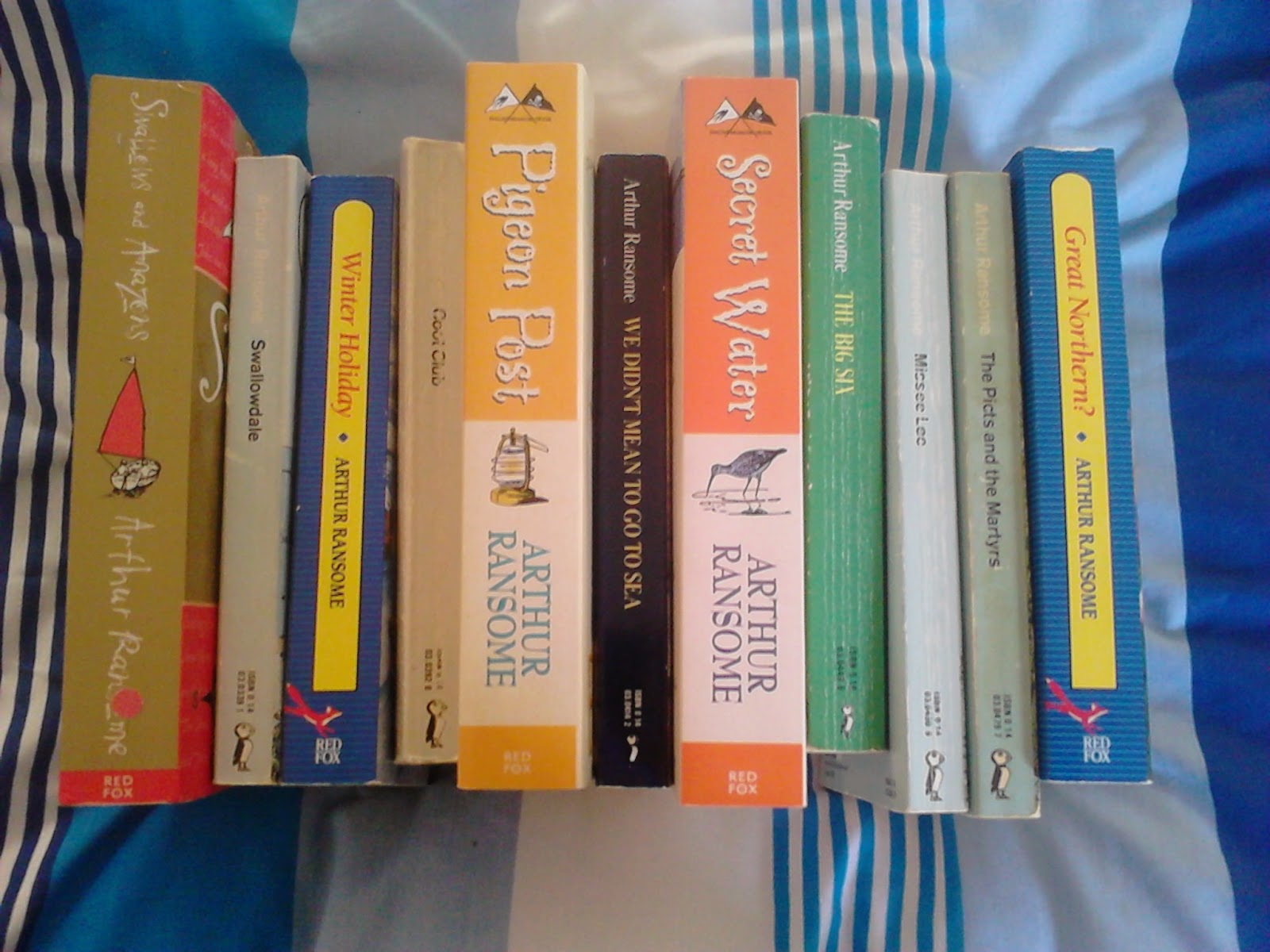 I've been reading Swallows and Amazons already this morning and I still love it. I don't think I've actually ever read most of the rest, although I do have a very vague memory of Missee Lee, so it should be fun and hopefully get me back into blogging a bit more regularly!

Posted by anarmchairbythesea at 14:31 No comments: