A Few of My Favourite Things: A New Series! 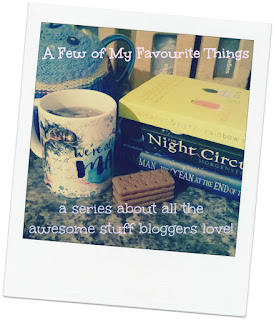 Welcome to my new semi-regular series where bloggers and generally bookish internet types will
share some of their favourite things with you! The basic idea is to use this series to point you in the direction of things we love and want you to know about, and kicking it all off! If you'd like to be featured in future weeks just fill in this form and I'll be in touch!

I worked for a while on this post. It's taken several different forms, but then I decided the best way to do it was to group things together, because otherwise we could be here for days! To make a change I wanted to start with the non-bookish stuff, and particularly the miscellaneous things which don't fit into any other group and would usually be left til last, so here we go!

I love bubble baths, primarily because I can read without interruption but also because they're extremely relaxing. For this purpose Radox bubble baths and all things Lush are amazing - my three year old even calls it the 'happy shop' and loves buying people bath bombs. Their stuff is all so yummy smelling and handmade!

One of my absolute favourite things and something Rhys and I have in common is our love of exploring. I often go for walks with the boys and take turnings just to see where they go. Equally we'll often get in the car and go for a drive without having a pre-planned destination. We've discovered some brilliant stuff this way! I find the AA's short walks and walk in your county series really useful for this as we can usually find a walk relatively near to where we end up and with a pushchair it makes it easier to know what to expect from a new place.

We were also bought membership to English Heritage for Christmas by my wonderful parents. In our part of the world there are so many English Heritage sites, particularly castles, to explore. The boys love it and it's great to have an easy alternative to heading to shopping centres when the weather is gloomy. We also have an annual membership to our local wildlife park which we've had for 3 years now. We go approximately once a week and all of us love it. The boys have picked up loads about the different animals that they have and we always feel rejuvenated after a visit. Basically what I'm saying is memberships are a great thing and you should get them because having them motivated you to use them.

In the summer the Ninja Book Swap will be four. Hanna and I started it after we both didn't want to wait until Christmas to have another bookish Secret Santa and I genuinely love seeing people meet and make friendships through it, as well as all the beautiful bookish parcels exchanged. It's the success of this which has enabled all my other projects which use a love of literacy to connect people. The London Bookshop Crawl absolutely must be on this list. I am so proud of myself for organising this day! There were things that could have been better - my sense of direction for one - but I planned the route, talked to the bookshops and through the power of twitter recruited the people to come on this epic expedition with me. It was amazing to meet so many lovely people with shared interests and especially brilliant to meet some Ninja Swappers whose names I previously only knew from the sign up sheet! My favourite thing of all is the feedback that I got from the day means that it will now be an annual event, and I'm doing a similar thing in Bath over the summer!

My final favourite in this group is my newest project, Parcels of Joy which I devised as a way to make fudge and baked goods a lot without having to eat them all myself. Pretty much just an excuse to send people stuff and see their reactions, but I'm excited that lots of people have signed up to send stuff as well! I'm also taking part in my second round of the OTSP Secret Sister Project at the moment. For six months you send a parcel to someone each month while trying to keep your identity a secret and it's the most fun. The community surrounding the project is incredible and I'd highly recommend checking out the twitter hashtag (#otspsecretsister) if you're having a rubbish day!

It goes without saying that I love the blogging community, and there are loads of great events taking place all the time, but here are a few of my favourites! The 24 Hour Readathon (highlights of the year!), the Re-Readathon (my own event dedicated to re-reading, there's one later this month!), Bout of Books, Banned Books Week, Nonfiction November and at the moment I'm super excited about the Month - long Weirdathon, which is pushing me out of my comfort zone. I also just joined the #feministorchestra book club, reading its first book this month, which seems like it will be brilliant!

Along the same vein as this, I have made some great friends through blogging some of whom I've met in real life and some of whom I haven't (yet!) but all of whom are brilliant, hilarious and generally get me. Most are bloggers and you should check out their links, but these are the people I interact with outside of blogs: Laura, Katie, Hanna, Ellie and Charlotte of course, but also Ellie and Ellie, Nahree, Emma, Iris and Sarah.


The last two years I've been trying to cut down the amount of stressful clutter in my life and the One Little Word project has really helped. Last year my word was Gratitude and this year it is Breathe and I love that these words and the monthly prompts really help keep me focused on staying present and slowing down.

Another thing that helps me is The Simple Things magazine. Rhys has just got me a subscription because who doesn't want a monthly dose of ways to unplug, reconnect, get outside and go exploring! I'm also faintly obsessed with our garden and the concept of self-sufficiency. This year we're attempting strawberries, tomatoes, potatoes, sweetcorn,courgettes, peppers, garlic, leeks, apples, pears,blueberries, cherries and plums. If you have the chance to grow anything (tomatoes and peppers are easy on windowsills if you have no garden!) you should give it a go - it's surprisingly easy and so rewarding! Blackberry picking is also one of my all time favourite simple pleasures.

Finally a couple of blogs and books helping me on my simplicity journey are Be More with Less, The Minimalists, Animal, Vegetable, Miracle by Barbara Kingsolver, Hands Free Mama by Rachel Macy Stafford and The Artful Parent by Jean Van't Hul, and The Idle Traveller by Dan Kiernan.

And I'm done! There are things I've missed (many of them!) but I'll save them for a future post. If you're still reading, I think you're awesome and I hope I've managed to point you in the direction of some great stuff you didn't know about!

A final thing that I love is giveaways, so here you have the chance to win some of my favourite things! Most of these are UK specific, but some are international.


There won't be giveaways with every post in the series, just this one because I'm obsessed!
Posted by anarmchairbythesea at 20:11