#feministorchestra: I Call Myself a Feminist 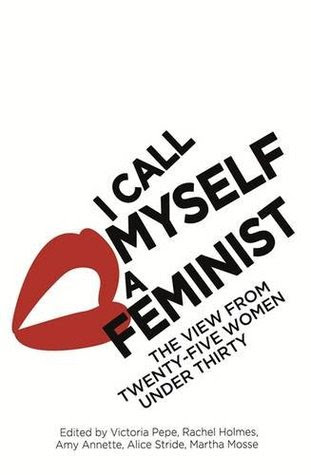 In case you missed it, I joined Jean's (of the Youtube channel Jean's Bookish Thoughts) new feminist book club and the first title picked was I Call Myself a Feminist: The View from Twenty-Five Women Under Thirty. Firstly, recently I have had call to explain to more than one person of my acquaintance that being a feminist doesn't mean I hate men. It doesn't mean anyone in this book hates men either, and feminism is so so so not about oppressing men. If you think that it is, please allow me to buy you a copy of this book so you can see how much it isn't.

Now that's over, I found this collection really helpful. I've identified as a feminist for years - since my early teens if not before - but I haven't really done anything about that for a long, long time, and that includes little things like calling people out on sexist 'jokes' and comments. Occasionally I raise eyebrows at colleagues who say something slightly off-colour, but that's really the limit of it. Having read this collection, I'm going to try to be more active.

Although it doesn't go into issues in depth, the pieces in this collection represent such a broad spectrum of feminism. It includes people of all sexualities and ethnicities and the articles (I've just been watching Jean's video on the book and she says - and I agree - that the pieces aren't really essays, more testimonies) involve such a range of issues that feminism interacts with that it's impossible to see feminism as being 'just a women's issue' or even as just being about equality anymore. I mean, obviously it is about equality - that's its major aim- but equality encompases such a range of areas of life and so many issues, some of which I'm fortunate enough to have never had to think about before.

I, like most other people in the Goodreads group I think, didn't love every piece in the book, but I did feel that it was a really good overview and introduction to feminism, whether you're a completely new feminist or not. It made me think about a lot of things I hadn't thought about in a long time, and I very much appreciated that. Being in the position I'm in in my life, it's easy for me to not think about the reasons why I'm a feminist too much, aside from when I'm planning getting home late at night, or what to wear when I go on a (very rare nowadays!) night out, and this collection made me remember all the other women out there less fortunate than me. There is nothing that separates me from them besides circumstance. I didn't do anything to become a white girl with a non-discriminatory job and a husband who believes in and actively supports equality and shares housework and childcare equally with me. It's just luck, and if I were being discriminated against (more than the everyday sexism I encounter, as all women do, any time I go out at night or wear anything deemed to be even slightly 'revealing') I would want people to stand with me and support me. Everyone should be equal, regardless of gender, ethnicity, sexuality, ability or anything else you can think to discriminate against. At the end of the day we are all people, and this book is a good reminder of that and of the importance of fighting for it.

I turned over a lot of pages while reading this. Although I didn't love all the articles, a lot of them really resounded, and there were none that I really hated. Favourites were Martha Mosse's piece about the problems with the term 'feminism' and the hostility that it can engender, Rosie Brighouse's piece about the Human Rights Act, which I vaguely knew was a 'good thing' but had no idea of the help and protection that it actually provides, which just goes to show how my information gathering has suffered in my post-student years!, and Reni Eddo-Lodge's final piece entitled What Can Men Do to Support Feminism?, which for me is one of the key issues in stopping gender inequalities. If we can get more men to identify as feminists and embrace all that is entailed that can surely only be a good thing.

Although I didn't love all the quotes, there was one from Margaret Atwood that I really loved, and others I thought were strong accompaniments to the articles in the collection, so although I could have done with fewer of them and more expanded essays, as I felt some of the points could have done with more depth, overall the collection for me was a resounding success and one I'd be happy to pass on to everyone who stands near me long enough!