This week The Classics Club, that often ignored mainstay of my blogging life, announced the Women's Classic Literature Event, the idea of which is to read classic literature by women. It runs from now until the end of 2016 and as you can imagine I am super super excited about it!

They also posted a survey of which I will answer some questions here, because who doesn't love a good survey?

1. Introduce yourself. Tell us what you're most looking forward to in this event?

I'm Bex and honestly I'm most excited about exploring some of the titles by women already on my list. I'm also really looking forward to seeing what other people are reading and hopefully taking part in some events and talking all things womens literature.

2. Have you read many classics by women? Why or why not?

I've read all of Austen as well as Jane Eyre, Wutherine Heights and The Tenant of Wildfell Hall by the Bronte sisters. I also read To The Lighthouse by Viriginia Woolf in University, which I strongly disliked, and Lady Audley's Secret by Mary Elizabeth Braddon, which I remember next to nothing about. More modern classics include The Colour Purple by Alice Walker and Their Eyes Were Watching God by Zora Neale Hurston as well as To Kill a Mockingbird by Harper Lee, I Know Why the Caged Bird Sings by Maya Angelou and The Bell Jar (and selected poetry) by Sylvia Plath.

Honestly in the past I've not gone out of my way to ensure that I'm reading a lot of classics by women. Naturally my reading tends to be more than 50% female authors but this doesn't seem to translate to classics. I don't know if it's because there's less available (unlikely) or just because there's less that I know about, but hopefully this event will help to rectify that!

3. Pick a classic female writer you can't wait to read for the event. List her date of birth, her place of birth & one of her most famous works.

I've had the Little House series by Laura Ingalls Wilder on my Classics Club list since the start and I'm really excited to finally start it for this event. She was born in February 1867 in Pepin, Wisconsin which only had 837 people living in it at the 2010 census so I can't imagine how tiny when she lived there!

8. Will you be joining us for this event immediately or will you wait until the new year starts?

I'm going to be joining in December, although I'm doing Hanna's Moby Dick readalong starting tomorrow so that's a classic at least, but then there's Nonfiction November so I'm kind of tied up with that (in the most awesome way of course).

9. Do you plan to read as inspiration pulls or will you make out a preset list?

I plan to do a bit of both. I'm including here all the titles by women left on my list and then I'll probably do some browsing at Persephone when we're there on the bookshop crawl and be inspired by what others are reading as well. The titles I have on my list are:
12. Do you hope to host a readalong for the group? 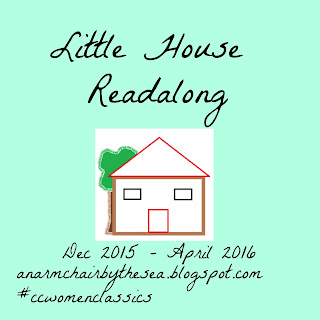 Yes! I'd like some company reading the Little House books so I'm going to do a series readalong starting in December. Hopefully some other people will be interested in joining me for at least some of the books. The tentative schedule will be thus:

December: Little House in the Big Woods, Little House on the Prairie
January: On the Banks of Plum Creek, By the Shores of Silver Lake
February: The Long Winter
March: Little Town on the Prairie, Those Happy Golden Years
April: Farmer Boy, The First Four Years

Let me know in the comments if you're interested in joining me for some or all of it. I'll post an official schedule and sign up next month sometime.

13. Is there an author or title you'd love to read with a group or buddy for this event?

I need a buddy to read The Age of Innocence with me! I started it before and couldn't get into it but really want to.

Excited for this event! Please leave links to your posts about it in the comments, I'd love to check them out! For more details check out this post or find the full survey here.
Posted by anarmchairbythesea at 09:15