Travel the World in Books Readathon!

So you probably saw that I had a little fail at the 24 hour readathon. I mean, I read the whole of Queen of Shadows so not really a fail per se, but just that I never felt really very readathony, so when I saw this readathon on Heather's blog this morning I felt I had to join in. 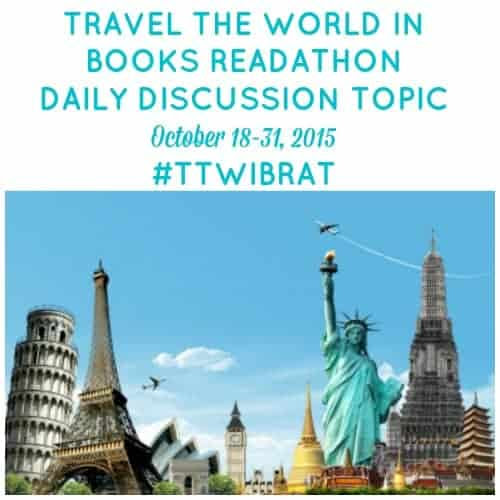 Travel the World in Books is hosted by Becca, Savvy, Lucy, Aloi and Tanya and since I only found out about it today, the day that it starts, I never got a chance to do a sign up/goals post so consider this the sign up/goals and Day 1's discussion post!

The basic idea behind Travel the World in Books:
Explore countries other than the one where you live. Read as much as you can of books set in a different country or by an author from a different country. Read for your own pleasure or learning, read with your kids or both. Travel the world from the comfort of your own home and learn about different cultures. Expand your horizons and show publishers that #WeNeedDiverseBooks to promote cultural understanding and diversity in our reading. Support diverse authors and books. #TraveltheWorldinBooksRAT

I love this idea! I set myself a diversity challenge for this year and I have totally failed at it so this will at least get me thinking about it again. I have (of course) a little pile of books that I may get to during the two week period, given that I am still reading Moby Dick for the readalong of course, but I've started with The Shadow of the Wind by Carlos Ruiz Zafon which people have been telling me I'll love forever...

I also love the idea of reading world literature with my kids. They are really only at the picture books stage, but it's sent me to Google where I found several great lists including Around the World in 80+ Children's Books, and Around the World - One Picture Book at a Time. As soon as my kids are in bed tonight I'm going to be doing some serious perusing of the library catalogue and placing some holds!

Each day has discussion topics and an instagram challenge. I'm not sure I'll do all of them but let's at least start right! So, to introduce myself!

I'm Bex, I live on the South East coast of the UK with my husband and two small boys (3 and 16 months). I'm a biiiig reader and I've been on a book buying ban since March of this year which doesn't lift until January 2016 (!!) but I've been finding it really soothing actually to just read from my own shelves. It's also been a really big incentive that I've used it as a way to raise money for charity and have been selling off my books after I read them.
I think I'm the only person in the world who doesn't own or have any desire to own an ereader. I only read in paper and I love it that way. I use books like other people do ornaments and recently rearranged my TBR bookcase by colour so it's a beautiful rainbow now!

In terms of world lit, I'm fascinated by China but haven't read a huge amount of Chinese literature. My favourites would have to be Jung Chang's Wild Swans and Xinran's The Good Women of China. Both nonfiction but great. I've also read a few Nigerian authors recently, including Chimamanda Ngozi Adichie, Helen Oyeyemi and Chigozie Obioma and really enjoyed their world, although I annoyingly didn't get to finished Obioma's The Fishermen before it had to be returned to the library! Oh, and I recently read Giller longlisted If I Fall, If I Die by Michael Christie and thought it was totally fascinating. So.

Are you taking part in this readathon? What are you planning to read? Do you have any recommendations for me from around the world? Please leave them in the comments!
Posted by anarmchairbythesea at 17:43