It's readathon tiiiime! OK I'm a couple of hours late but not really as I've been reading on and off since two hours before it started. It's been Benji's birthday this week and we're having some family round this afternoon so I don't think I'll get a lot of reading done until after they're in bed. Even then I'm not sure because I've done something to my back and so can't sit for long periods and also am on a lot of painkillers making me pretty drowsy so we'll see!

That said, I LOVE readathon! Hopefully I'm going to have chance to check out a few blogs later - I discovered some great ones from the April readathon, and I've already been chatting with people on Instagram, where you can find me @armchairbythesea.

I'll be updating this post hopefully at least a couple of times, and thought I'd kick off with the introductory survey and a picture of my TBR. 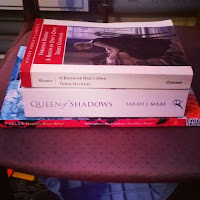 Keeping it realistic this time around, just A Room of One's Own by Virginia Woolf which I'm reading as part of the Classics Club Womens Classic Literature Event, Queen of Shadows by Sarah J. Maas which I already started, and Fables: Happily Ever After by Bill Willingham for some light relief in the early hours!

1) What fine part of the world are you reading from today?

I'm on the coast of Kent, UK where it is extremely drizzy and pretty cold. Definitely jumper weather inside the house as I refuse to have the heating on all day! There will be many blankets involved in this readathon.

2) Which book in your stack are you most looking forward to?

Queen of Shadows by Sarah J. Maas. I wasn't sure when I was going to get to read this because of my book buying ban, but my sister is also into the series (thanks Ninja Book Swap) so she bought it and is staying this weekend and brought it for me to read so I'm getting stuck into that already!

3) Which snack are you most looking forward to?

I don't really have snacks as such this time, but we are having pizza and Oreo cupcakes later on for birthday tea which I anticipate being full of greatness. I also have some gorgeous East India Company Earl Grey tea which I'm saving for the early hours...

4) Tell us a little something about yourself

I recently reorganised my TBR (300+) by colour.  Now I have a rainbow in my room and it makes me the happiest. Last readathon I spent the first six hours reading as many books to my kids (aged 3 and 1) as I could. This time I'm not doing that because of aforementioned family commitments, but I'm planning to do it again in April. I loved that my 3 year old was picking up on how excited I was about readathon!

This is definitely not my first readathon. Honestly I don't think there's much I'll do differently today - not put too much pressure on myself, just have fun, don't forget the social aspect. The only thing I've done differently is to be less ambitious with my TBR which instantly made me feel less pressured!

Stats so far (hour 2):
Pages read: 65
Books read from: Queen of Shadows by Sarah J Maas
Snacks consumed: I just had lunch (cheese & tomato on toast, hula hoops, raspberries and leftover birthday cake) and am having previously mentioned birthday tea in a while...
Books finished: 0
Blogs visited: So far I managed to check out Allie's blog (A Literary Odyssey) and... that's it!

Update #3
I don't know what's happened to my hour 8 update, it seems to have disappeared into the ether...Aaanyway I was back in hour 8 and read until hour 12 when I went off to bed. Then I was up again with Benji for an hour around hour 15 and got 25 pages or so read if The Wee Free Men by Terry Pratchett, which was entirely not on my TBR, because it was on the shelf that happened to be near me! Now it's hour 20 and I'm back again but only for a little bit longer! I've made quite a lot of headway with Queen of Shadows but overall I do feel like this readathon has been a bit of a bust for me! In April I will do what I always say I'll do and take myself off somewhere for the weekend so I can do it properly!

Stats so far (hour 20)
Pages read: 335
Books read from: Queen of Shadows by Sarah J. Maas, Running Like a Girl by Alexandra Heminsley, The Wee Free Men by Terry Pratchett
Snacks consumed: Some Belgian chocolate biscuits left over from the party yesterday and Earl Grey tea!
Blogs visited: Outlandish Lit, Love, Laughter and a Touch of Insanity, The Book Monsters
Posted by anarmchairbythesea at 14:57