Currently: It's Been Far Too Long (& a Bit of September Wrap Up)

It's been too long since I did a Currently post and I'm feeling a little disjointed with my reading so it felt like time! Also I've been up for waaay too long this morning due to Benji's current thinking that it's a good idea to refuse to eat most of his dinner and then wake up at 5am complaining of hunger. The joys of parenthood.

Time and Place 7:10am on Sunday morning in my (fairly chilly) front room. Benji is watching Winnie the Pooh and I'm 'resting' (aka reading The Bookshop Book and blogging). We've just been making dough for English Muffins, because I like to utilise the time when having to get up at ridiculous o'clock for no reason, and doing some painting.

Eating and Drinking: Tea. In the biggest mug I could find. I just had a scone with blueberry jam as well but we're waiting for Rhys and Sam to wake up before we have breakfast proper.

Reading I'm going to do this in two parts; one what I'm reading now and then what I read during September. I'm reading a few things at the moment. Firstly, If I Fall, If I Die by Michael Christie is longlisted for the Giller Prize this year and was my pick after I decided that I'd read one long/shortlisted book for each of the prizes I follow. I'm a couple of chapters in and it's really intriguing so far. It's about a boy, Will, whose mother doesn't let him go outside and what happens when he does eventually venture out. Then I'm reading Running Like a Girl by Alexandra Heminsley which Charlotte recommended ages ago and then I found totally by accident in the library last week. As an ex-runner so much of what she says resonates and it's absolutely hilarious. I'm sort of hoping it will help pull me back into the running thing. I'm picking my way through Lair of Dreams by Libba Bray as one of my reads for RIPX but I can only read it during the early part of the day because it's creeeeeeepy and I'm a wuss. It's brilliant so far though - every bit as good as The Diviners. Finally, and as previously mentioned, I'm rereading The Bookshop Book by Jen Campbell as sort of research for my London Bookshop Crawl (of which more later).

During September I finished six books which is absolutely not bad for me nowadays. They werrrrrre; The Assassin's Blade by Sarah J. Maas (to make up for me being the only person in the world who hasn't yet got Queen of Shadows. Thankfully my sister bought it so I can borrow it when I next see her in a few days), Weird Things Customers Say in Bookshops by Jen Campbell, which my sister and brother-in-law sent Rhys and I as a sort of amalgamated birthday present, The Night Circus by Erin Morgenstern and Animal, Vegetable, Miracle by Barbara Kingsolver which were both rereads during ReReadathon #2, Cress by Marissa Meyer (for The Lunar Chronicles Readalong that I've been taking part in), and When It Happens to You , a beautiful collection of inter-related short stories by Molly Ringwald, of Breakfast Club fame.

Loving The Ninja Book Swap! I signed up for two parcels this time around and received my first one yesterday and it was awesome as usual. The book choices were great - I've been wanting to read We Were Liars since everyone was talking about it a while back, and Tracy also sent me one of her favourite books which is entirely in the spirit of the swap - send people stuff they'll love and also connect and share the things you love! She also sent me chocolate, a kit for making my own earrings, a beautiful bookmark and a SNITCH NECKLACE which I didn't discover til I was going to bed last night is ALSO A WATCH. I am the most excited about this and will be wearing it all the time. Tracy, you are fantastic and completely made my day! 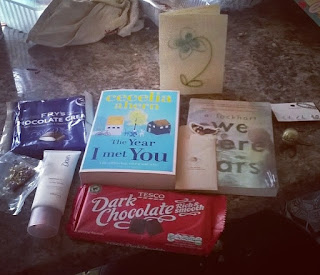 Acquiring We're on a spending freeze in October which means we're only buying essential groceries and paying for necessary travel (to work and occasional trips with the boys) and the bills and direct debits we usually pay for. Immediately prior to it starting I bought Rhys season 1 of Smash which he'd been talking about for a while. When I saw it in Asda for £5 I couldn't resist! We also got Mr. Turner and The Book Thief movie on 2 for £10 in HMV. Also Laura sent me her old Penguin English Library copy of Moby Dick (thanks Laura, it's beautiful!) so I'm ready for Hanna's readalong! 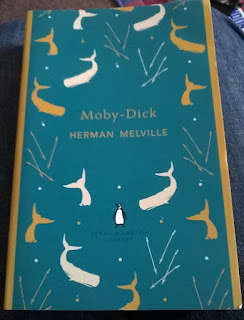 Watching We've been watching The Great British Bake - Off obviously. I'm totally hoping that Nadiya will win because she's great. We've also been watching Hairy Bikers: Northern Exposure which is really interesting. I love learning about different types of cookery and it's very inspiring. We're also watching the latest series of Gareth Malone's choir. This series features acapella groups and it's fun. Also, obviously, Dr. Who has started up again so we've been watching that, although I haven't seen last night's episode yet because I decided it looked too creepy for me to watch right before going to bed, so we'll watch it this evening probably.

Making I've been making quite a bit, particularly since we've been on this spending freeze. Yesterday I made potato soup with bacon which was amazing. I may share the recipe during the week as it's brilliant and super simple (and cheap!). This morning, as mentioned, I've made English Muffins, and I've also used the spending freeze as motivation to finally finish sewing the last sleeve into a jumper I started knitting for Ben a year ago.

Anticipating So many good things coming up! Sending and receiving my second Ninja Swap parcels, putting together my #OTSPSecretSister parcel for October (it's so great!), Ben's third birthday, a blogger meet up in Stratford-upon-Avon towards the end of the month, and then Nonfiction November and the nonfiction book swap I'll be organising again during it. Also the London Bookshop Crawl despite it still being four months away. I sent out preliminary emails on Friday with a poll to vote for the bookshops you most want to visit. If you're interested in joining us have a look at my ideas here and you can also sign up with your email and I'll email you the rest of the details I have so far! Any booklovers in London or who can get there for a Saturday in Jan/Feb are welcome to join us!

That's what I'm up to! What are you reading? Are you planning to come on the bookshop crawl?