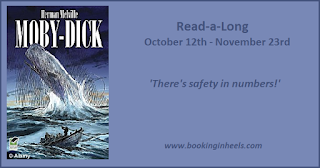 The Moby Dick readalong has officially started and I have somehow already read 15.5 of this weeks allotted 21 chapters. I'm trying out someone's tactic from the War and Peace readalong (I can't remember whose, sorry. Maybe Charlotte's?) of getting the chapters read asap and then treating myself by reading whatever I want for the rest of the week. It's a good motivator so far!

Anyway, since I didn't get chance to do these questions last night let's pretend I haven't already started the book and talk about my expectations.

1. What are you expecting from the novel? Do you have any preconceptions?
I'm expecting it to be about a whale. Honestly, other than that, Matilda loves it so I feel like I have a good chance? I'm slightly nervous because it seems like it will be long and we all know about my aversion to reading things I 'have' to read, but after the total let down that was me not finishing War and Peace despite really enjoying it I am determined to finish this!

2. What do you already know about the plot or characters?
It's got whales in. And a guy called Ishmael.


3. This book, unlike War & Peace isn't a translation. Do you think that will make a difference?
Like Hanna said, yes because it won't have had the language or whatever updated by the translators and is just as Melville wrote it. I'm not sure if that's better or worse though, we'll have to see about his writing style. (Oh, I'm so sneaky at pretending not to have read any yet!)

4. Have you read Moby Dick before? If not what prompted you to read it now?
About two days before Hanna announced the readalong Laura had offered me her Penguin English Library edition of the book, to which I had said yes please because it had been on my radar once up on a time (and even on my Classics Club list for a while) so when I heard about the readalong it just seemed like time. When better to read something that you kind of meant to get to one day than when there are other people around to bully you into finishing it right?

5. Show us a photo of your book 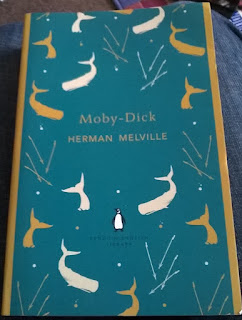 Ahhh such a beautiful cover!

If you want to join the Moby Dick fun (ha!) you can do so here.
Posted by anarmchairbythesea at 20:05