Things That Make Me Happy #5

This week more than ever it seemed really important from a personal point of view to write a Things That Make Me Happy post. With everything horrendous that's happened in the world in the last few days it just seems like the time to bitch and whine is over, and the time to celebrate the wonderful things, big and small, and let people know that we love them has come. 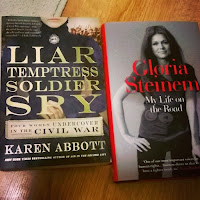 To tie in with Nonfiction November I've been organising a Nonfiction book swap again this year. I signed up for two partners but then ended up with three due to their being odd numbers signed up. I've sent off all my books (although they may be arriving in a couple of packages because Wordery is slightly weird like that so be aware, partners!) and two of my parcels arrived this week. Both were super awesome and exciting! From Heather of Based on a True Story I received Liar, Temptress, Soldier, Spy by Karen Abbott, about women who worked undercover during the American Civil War, and Gloria Steinem's My Life on the Road. I know not a lot about Gloria Steinem (or the American Civil War if I'm brutally honest) so I'm really excited for both of these. Thanks again Heather! 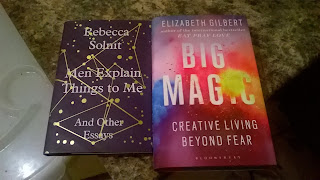 My second parcel arrived from Care of Care's Online Book Club and was super exciting as it contained Big Magic: Creative Living Beyond Fear by Elizabeth Gilbert which I've been hearing about everywhere. The TED talk it's based on I'm actually watching/listening to right now (and by the way, the existence of TED is another thing that makes me inordinately happy). It also contained Men Explain Things to Me And Other Essays by Rebecca Solnit which a lot of people have talked about as well. I've been looking for more essay collections, particularly by women and so this will fill that gap nicely. I'm hopeful that I'll even get to it during November! Thank you so much, Care! 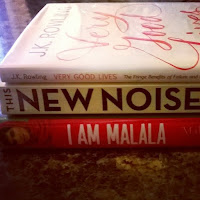 I think everyone knows how much I love and adore Nonfiction November. I will be writing another part of my favourite nonfiction reads ever post this week as long as I manage to find time, and I'm pretty proud of the posts I've written this year for the event. I've also added so many amazing nonfiction titles to my wishlist, it's made me aware of how little I know about but in the greatest of ways. The thing making me the most happy this week though is how many books I've actually read for it! As well as the books in this picture I've also just finished How to be a Heroine by Samantha Ellis, which I'll be reviewing soon, and I'm halfway through Finding Home: Real Stories of Migrant Britain by Emily Dugan which is just really incredibly informative and I feel like I'm actually becoming a better, more empathetic person through reading it.

Besides those, I'm also in the middle of Running Like a Girl by Alexandra Heminsley (which I recently found and dived back into!), Quiet: The Power of Introverts in a World that Won't Stop Talking by Susan Cain, One Summer: America 1927 by Bill Bryson and Stuff I've Been Reading by Nick Hornby. Because why read one book when you could read four?

Basically, this month is the greatest!

I got my partner for The Broke and the Bookish Secret Santa project today and I am so excited to start shopping! This was the original inspiration behind the Ninja Book Swap so I owe Jamie a massive debt of gratitude and I also just really love taking part in this project. It's so well run and so nice to participate in a swap that I don't have to organise! Seriously though, Jamie is amazing - she matches up a phenomenal amount of people all on her own and does a really good job. Excited! 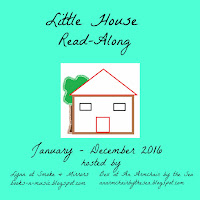 So I recently announced my intention to take part in the Classics Club Women's Literature Event and mentioned that I wanted to host a year long read-along of the Little House books by Laura Ingalls Wilder. It turned out that someone else in the club had wanted to do the same thing and she was put in touch with me and now Lynn and I are cohosting this fantastic year of comfort reading throughout 2016. If you want to join us for all or some of the books you can find all the details here, we'd love to have you! 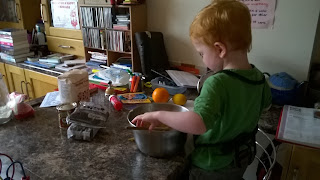 We baked our Christmas Cake this week (I know we're late) and it was the first year that Benji was really old enough to help. As you can see, he was super cute and his Christmas cake wish (which it's ok to tell you because he told me) was for 'people to be happy and ....sweets'. I love baking the Christmas Cake... just the way it mixes together with that ridiculous amount of dried fruit and then how the house gradually fills up with Christmas smells. Just yum. So looking forward to eating it!

Family walks by the sea 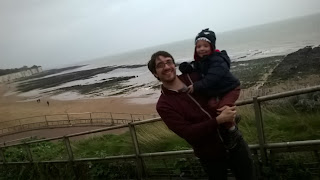 We had an extra day of family time this week and it's been really nice spending more time together where we don't have much we need to do. We spent some time in the town we used to live in, just walking by the sea and giggling a lot. It was great. As you can see, the weather wasn't brilliant but honestly one of the greatest things about living by the coast is getting to be there in all weathers. Sometimes grey and rainy is better than summer.

I've discovered some brilliant new to me blogs recently and I don't highlight them enough any more so I thought I'd take the opportunity to do so!

So OK, to begin with; book blogs. I recently took part in the Travel the World in Books Readathon and discovered Guiltless Reading, and also realised that I wasn't following I'm Lost in Books or Based on a True Story. All three of these are great, eclectic blogs written by wonderful women. Becca of I'm Lost in Books also cohosts Nonfiction November, and Heather of Based on a True Story was my nonfiction swap partner as well as being a participant in the Ninja Book Swap just gone. All are worth checking out!

I'm also really getting into the whole simplicity/minimalism thing at the moment and have found a couple of 'so great I want to read their entire archive' blogs this week. Becoming Minimalist and Be More with Less are both extremely worth a browse, but do be prepared to immediately want to start getting rid of your stuff!

Also, not a blog but I am in love with Book Riot's All the Books podcast! It is such fun listening and Liberty and Rebecca read such awesome stuff. My wishlist increases every single week, and if you haven't listened yet you should!

So yeah, you can see there is a lot making me happy this week. In the aftermath of the past few days' events I'd kind of forgotten that and I needed to remember. It's important to remember.

As always thanks to Ellie for being a happiness inspiration!
Posted by anarmchairbythesea at 07:00