A Mini Bookshop Crawl with Some Awesome People

For a while we've been trying to organise a book shopping day and meet up for a whole group of us. A while ago the date was fixed for this weekend but life got in the way and in the end it was just Laura, Katie and I (which is obviously fantastic, but we've decided that we're coming up North next time so the rest will have no excuse!). The day wasn't really planned as a bookshop crawl as such but we had a few places in mind that we wanted to visit and managed to get to them all (except Persephone which we didn't think we'd make it to before it shut) plus a couple of extras!

Back in April my wonderful husband paid £20 (the penalty I set myself for buying books) into my charity sponsorship page so that I could have one book shopping trip this year while still on my ban and I've been saving it for this trip since then, so of course I bought some books!

Katie and I met up at St Pancras fairly early in the morning. After my mum had arrived to take the boys to her house we headed off for a wander round and accidentally stumbled into the British Library shop while looking for the Alice in Wonderland exhibition (doesn't start til the end of next month!). If you've not been there, it's got an awesome bookshop full of miscellaneous bookish stuff, and despite it being an unplanned stop I did end up picking up this beauty: 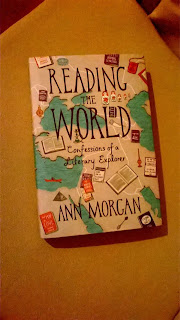 This is probably the book I'm most excited about from our excursion. I recently took part in the Travel the World in Books readathon and it made me realise how badly spread out geographically my reading still is. In this book Ann Morgan sets out to read a book from every country in the world and as I'm currently composing a list of my own along the same lines this seems like it will be very inspiring!

When I looked for bookshops near to our current location my map helpfully told me that Housmans wasn't far away which was perfect as I'd been wanting to check it out since Erica recommended it to me during planning for the London Bookshop Crawl. I think this may be my favourite discovery of the day. I want to go back and spend a few hours browsing through their eclectic collections. Katie and I both kept being drawn back to the graphic novels though, and eventually I convinced Katie to buy Fun Home by Alison Bechdel (I didn't have to try very hard) while I got Becoming Unbecoming by Una, which is about growing up when the Yorkshire Ripper was at large, in a society where male violence pretty much goes unquestioned. It's set against a background of the police man hunt for the serial killer and is published by Myriad Editions who are one of my favourite publishers. 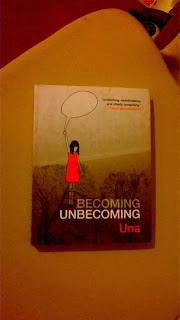 After a bit of confusion with meeting Laura we eventually found her in Foyles but were all so hungry that we headed off for food. A long, loud lunch later we meandered our way towards Waterstone's Piccadilly, where we happily spent the next hour shoving books at each other, loudly gesticulating and using unladylike words faaaar too many times. After picking up half the shop I finally ended up with three books. 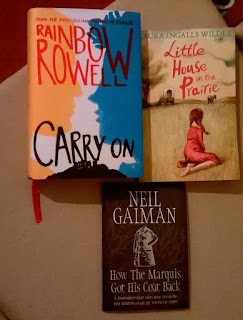 I've been debating whether to buy Carry On by Rainbow Rowell since it came out, but I finally caved today. For those who don't know, it's an entire book of the story that is Cath's fanfiction in Fangirl and I'm still not sure what to think about the concept, but since it's Rainbow I had to give it a go! Lynne and I are hosting a year long readalong of the Little House series all next year (look for details coming soon!) and I didn't actually own Little House on the Prairie so I thought I'd better get this, particularly as it's so gorgeous. I also wanted to buy Farmer Boy but they didn't have it in the same edition so I held off. Finally, Katie put How the Marquis Got His Coat Back into my hands very soon after we walked in the door and since it's a new Neverwhere story and was only £1.99 I bought it as a present for Rhys, who had to work while I was off gallivanting.

The vastness of Waterstone's made a cake stop the necessary next step so we headed off to Cafe Nero opposite, where Katie and I ate a lot of cheesecake and we took a picture of Katie with alllll the books so we could pretend she bought them all. Then we headed up the road to Hatchards, which we missed when we went book shopping back in February. I swear that shop is a tardis. It looks fairly small from the front but it just keeps going back! We spent quite a while browsing, and again scaring other patrons by being loud and raucous, pointing stuff out to each other and Katie even did a lovely reading of the hilarious picture book I Want My Hat Back by Jon Klassen. I ended up buying Astray by Emma Donoghue, whose book of reimagined fairytales, Kissing the Witch I've been partway through for ages and whose back catalogue I'm extremely excited to explore, and My Salinger Year by Joanna Rakoff as a contribution towards Nonfiction November. I also picked up a little free map of 10 of the places that inspired Brian Selznick as he was writing The Marvels, which I bought as a present for Rhys earlier in the week. 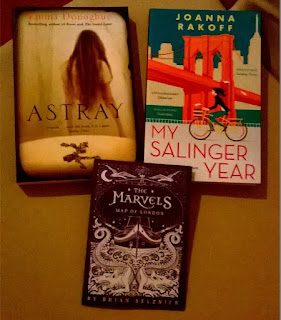 By this time it had been dark for a while and we were getting fairly tired - some of us had been up since 5.50am due to small people and others of us were contending with the whining and constant need to sit down of the same ones of us who had had a knitting needle fairly deeply embedded in their foot the previous night and thus hobbled around London all day bandaged up. We had another break for caffeinated drinks and a chat and then we decided to hit Forbidden Planet before heading homewards.

As is becoming a tradition, Laura and Katie had a browse around the upstairs geekery while I headed downstairs to pick out more graphic novels than I would usually buy in a year to carry around with me for ten minutes before deciding to buy one and trying to remember where I got the rest from so I could put them back. Last time we were there Hyperbole and a Half beat all the competition, but today the winner was Long Walk to Valhalla by Adam Smith & Matthew Fox, which I'd never heard of before. The title grabbed my attention and it just sounds really fantastic. It's about a boy named Rory who wants to forget a lot of things, including his brother Joe (who was, according to the blurb 'mentally challenged). Then a girl named Sylvia turns up and claims to be a Valkyrie sent by Odin to bring Rory to Valhalla and forcing him to face all the aspects of his past he's tried to lock away. I am so excited to read it, and it helps that the artwork is just gorgeous. 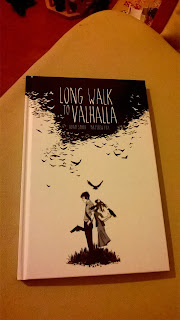 In case you're interested, the titles it won against were Burma Chroniclesby Guy Delisle, The Wicked and the Divine: The Faust Actby Kieron Gillen & Jamie McKelvie, Y: The Last Man Volume 1 by Brian K. Vaughan & Pia Guerra, and Bitch Planet: Extraordinary Machine by Kelly Sue DeConnick, all of which I am absolutely going to read in the not too distant future.

After that we had no more energy for anything, and no more room in our book bags, so we headed to our respective homes. Besides an amazing haul of books which will last me for a good long while, I got the chance to have a brilliant, hilarious, relaxing day of book shopping with fellow booklovers, with a heavy dose of unrelated chat. Since I moved to Kent my girls have been scattered all over the country (and the world!). It's nice to have girls again :-) Northern girls, next time we're coming to you!

If you're interested on coming on the London Bookshop Crawl with us check out the link above , where there's a form you can fill in to register your interest!
Posted by anarmchairbythesea at 08:00