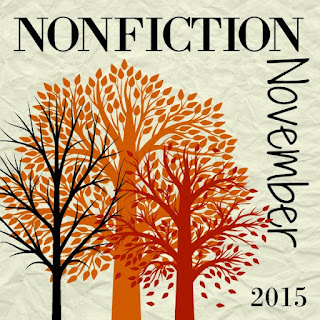 The topic for Nonfiction November this week was one that I initially didn't think I'd be able to write about as my thoughts originally leapt to audiobooks, but then I realised hey, I can write about graphic nonfiction. I've read a fair amount of that!

This week is hosted by Becca of I'm Lost in Books and we're talking about Nontraditional Nonfiction, so head over there to find more posts on the topic!

The first part of the post is my recommendations for some brilliant graphic nonfiction, and as ever, for the second part I'll be focusing on some titles I'm interested in reading. 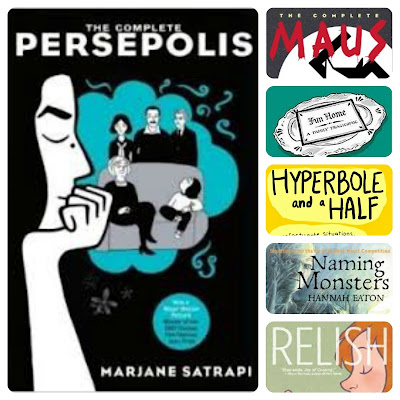 I was going to write about all these titles in detail but I feel like I've mentioned them all a fair amount before on the blog so instead I'll just link the titles to whatever I've written! In case you can't tell what they are: Persepolis by Marjane Satrapi (growing up in Iran during the revolution), Maus by Art Spiegelman (his father's experience as a Polish Jew and in concentration camps during WW2), Fun Home by Alison Bechdel (memoir of growing up and her relationship with her father), Hyperbole and a Half by Allie Brosh (memoir of growing up and various other things including depression. Hilarious), Naming Monsters by Hannah Eaton (memoir about coming to terms with losing her mother to cancer), and Relish* by Lucy Knisley (memoir about growing up with food).

* this post is not really about Relish. It's about other stuff, but I mention Relish once and how I loved it and 'am going to write about it at some point'. And then I never did.

And some that I really want to read: 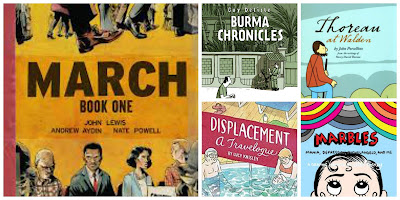 I think you can see but just in case (links go to IndieBound and are affiliate):

March: Book One by John Lewis (civil rights), Burma Chronicles by Guy Delisle (journalism on Burma), Thoreau at Walden by John Porcellino (a graphic interpretation of Henry David Thoreau's Walden), Marbles: Mania, Depression, Michelangelo and Me by Ellen Forney (memoir about creativity and mental illness) and Displacement: A Travelogue by Lucy Knisley (actually any of Lucy Knisley's books will do)

Also a couple of cool lists for more recommendations for those that want them:

I'm hoping this weeks posts (when I get a chance to catch up with them!) will help me expand my nonfiction reading horizons even more! Have you read any of these?
Posted by anarmchairbythesea at 07:00