I'm sure you'll have noticed by now that I'm extremely excited about Nonfiction November, taking place all this month! If you're also taking part then I'm sure you're having the same 'problem' that I'm having with the rapid expansion of your wishlist to accomodate all the brilliant recommendations you're getting from other people's posts. I thought I'd help with that by doing a few posts on my favourite nonfiction of all time. Originally it was going to be one post in a top ten kind of format, but there are too many for that so it will be at least two parts, probably more. You're welcome.

If you've read any of my favourites and love (or hate) them, let me know! I'd love to talk about them with you!

The book that started this whole blog thing off was The Complete Polysyllabic Spree by Nick Hornby; a collection of the book columns he wrote for The Believer. Another two of the recommendations on this list, Random Family and True Notebooks are a result of that book and I can't recommend it highly enough. He reads a prolific amount, as you can imagine, but also a really interesting array of stuff. At the time I first read it I was working with autistic kids and didn't realise that Hornby has an autistic son, but there were a few books that he recommended which I found to be really helpful. Honestly though, if you like books about books (who doesn't?) you should probably definitely read this immediately.

Following on from that, two favourites I don't remember a awful lot about and which will probably feature in the next ReReadathon are Random Family: Love, Drugs, Trouble and Coming of Age in the Bronx by Adrian Nicole LeBlanc and True Notebooks: A Writer's Year at Juvenile Hall by Mark Salzman, both of which are sociological kinds of books. Random Family focuses on two couples in the ghetto as they try to 'outrun their destinies'. True Notebooks focuses on Mark Salzman's time teaching a writing class in juvenile hall. Both are really insightful and inspiring.

Along the same lines my next two favourites are both books I read after having watched the amazing film Freedom Writers. The book that the film is based on, The Freedom Writers Diary takes the diaries written by the kids in Erin Gruwell's English classes, all of whom were from underpriveliged backgrounds and expected to fail academically, and combines them in an incredible portrait of life in a gang, on the streets and in the L.A Projects, and highlights the issues created when people start to fight each other because of race or culture. Teach with Your Heart is Erin Gruwell's own memoir about the same time in her life, and is incredibly inspiring. She was from a totally different background than her students and the book shows how she inspired them, uplifted them and went so far beyond the call of duty that it's quite astounding. 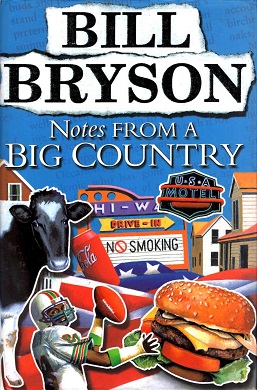 One of my favourite travel writers is Bill Bryson, who I'm sure most of you have heard of if not read previously. Two of my favourites of his books don't need much elaboration, but I'll mention them because they're both light, informative and hilarious. Notes from a Big Country was the first of his books that I read years ago and I thoroughly enjoyed it. The second book I would recommend is A Walk in the Woods which probably everyone will have heard of because of the recent Robert Redford film. It's about Bryson hiking the Appalachian trail and features a particularly memorable scene with a bear...

Back on the social issues front, Wild Swans: Three Daughters of China by Jung Change was one of the first nonfiction books I ever read and was a recommendation from my dad, which is a pretty rare thing. The other book he's always recommending is War and Peace, and we all know how I flaked out on reading that! However, Wild Swans is incredible. It's biiiig but worth it. Chang writes about three generations of her family; her grandmother, a warlord's concubine, her mother, a member of the Communist party, and herself.  She is also the author of Mao: The Unknown Story, and Empress Dowager Cixi: the Concubine who Launched Modern China, both of which I really want to read.

And finally one from very early on in my blogging life. Some of you  may remember me raving on and on about Persepolis by Marjane Satrapi, which was my first foray into non superhero graphic novels. I absolutely loved this. I think most people have read it but just in case you haven't, it's Satrapi's memoir about growing up in Iran during the Islamic Revolution and about her eventual self imposed exile and it is so thoughtful and hilarious and heartwrenching as well as being beautifully drawn. I'd recommend it to everybody.

As previously mentioned, there is a second part to this post which will be coming soon, but when I really started thinking about it there was just way too much good stuff to fit into one post without boring you all to tears! I am so loving this event, check out everybody's posts for week one of Nonfiction November here.
Posted by anarmchairbythesea at 20:47