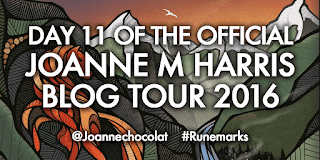 Today it's my turn on the Runemarks blog tour, for which I am the most excited because Joanne M Harris is one of my favourite authors. If you're not familiar, she's the author of Chocolat and many other excellent books, and Runemarks is a retelling of Norse mythology. Retellings are my favourite! 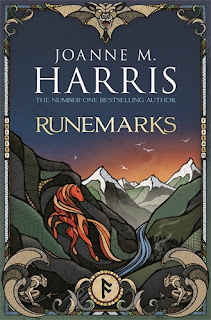 It's been five hundred years since the end of the world and society has rebuilt itself anew. The old Norse gods are no longer revered. Their tales have been banned. Magic is outlawed, and a new religion - the Order - has taken its place.
In a remote valley in the north, fourteen-year-old Maddy Smith is shunned for the ruinmark on her hand - a sign associated with the Bad Old Days. But what the villagers don't know is that Maddy has skills. According to One-Eye, the secretive Outlander who is Maddy's only real friend, her ruinmark - or runemark, as he calls it - is a sign of Chaos blood, magical powers and gods know what else...
Now, as the Order moves further north, threatening all the Worlds with conquest and Cleansing, Maddy must finally learn the truth to some unanswered questions about herself, her parentage, and her powers.
From the bestselling author of CHOCOLAT and THE GOSPEL OF LOKI comes a fantastical tale of magic, adventure and Norse mythology.

If this sounds intriguing there's an extract being run across all the blogs taking part. You can read yesterday's excerpt at Nut Press and then come back for mine:

THEY MET IN THE SUMMER OF Maddy’s seventh year. It was Midsummer’s Fair Day, with games and dancing on the green. There were stalls selling ribbons and fruit and cakes; there were ices for the children; Mae had been crowned Strawberry Queen for the third year running and Maddy was watching it all from her place at the edge of Little Bear Wood, feeling jealous, feeling angry, but nevertheless determined not to join in.

Her place was a giant copper beech, with a thick, smooth bole and plenty of branches. Thirty feet up, there was a fork into which Maddy liked to sprawl, skirts hiked up, legs on either side of the trunk, watching the village through the crook of her left thumb and forefinger.

And it sometimes showed her different things – lights and colours that shone around people and showed their moods – and often these colours left a trail, like a signature for any to read who could.

Her trick was sjón-henni, or truesight, and it was one of the cantrips of the rune Bjarkán – though Maddy, who had never learned her letters, had never heard of Bjarkán, nor had it ever occurred to her that her trick was magic.

All her life it had been impressed upon her that magic – be it a glamour, a fi ngering or even a cantrip – was not only unnatural, but wrong. It was the legacy of the Faërie, the source of Maddy’s bad blood, the ruin of everything good and lawful.

It was the reason she was here in the fi rst place, when she could have been playing with the other children, or eating pies on the Fair Day green. It was the reason her father avoided her gaze, as if every glance reminded him of the wife he had lost. It was also the reason that Maddy alone of all the villagers noticed the strange, dark man in the wide-brimmed hat walking along the Malbry road – walking not towards the village, as you might have supposed, but in the direction of Red Horse Hill.

Strangers were not often seen in Malbry, even at a Midsummer’s Fair. Most traders were regulars from one place or another – bringing with them glass and metalware from the Ridings; persimmons from the Southlands; fish from the Islands; spices from the Outlands; skins and furs from the frozen North.

But if he was a trader, Maddy thought, then this man was travelling light. He had no horse, no mule, no wagon. And he was going the wrong way. He could be an Outlander, she thought. She had heard that Outlanders travelled the Roads, where all kinds of people traded and met, but she had never actually seen one for herself; those savages from the islands and the oceans beyond World’s End, so ignorant that they couldn’t even speak a civilized language. Or he might be a Wilderlander, all painted in blue woad; a madman, a leper, or even a bandit.

She slipped out of her tree as the stranger passed and began to follow him at a safe distance, keeping to the bushes by the side of the road and watching him through the rune Bjarkán.

Perhaps he was a soldier, a veteran of some far-off war; he had pulled his hat down over his forehead, but even so, Maddy could see that he wore an eyepatch, which hid the left side of his face. Like an Outlander, he was dark, his skin burnt brown by the summer sun, and Maddy saw with interest that although his long hair was going grey, he did not move like an old man.

Nor were his colours that of an old man. Maddy had found that old folk left a weak trail; and idiots left hardly any trail at all. But this man had a stronger signature than any she had ever seen. It was a rich and vibrant kingfisher-blue; and Maddy found it hard to reconcile this inner brilliance with the drab, road-weary individual before her on the way to the Hill.

She continued to follow him, silently and keeping well hidden, and when she reached the brow of the Hill, she hid behind a hummock of grass and watched him as he lay in the shadow of a fallen stone, his one eye fixed on the Red Horse and a small, leather-bound notebook in his hand.

Minutes passed. He looked half asleep, his face concealed by the brim of his hat. But Maddy knew he was awake; and from time to time he wrote something in his notebook, or turned the page, and then went back to watching the Horse.

After a while, the Outlander spoke. Not loudly, but so that Maddy could hear, and his voice was low and pleasant, not really what she’d expected of an Outlander at all. ‘Well?’ he said. ‘Have you seen enough?’ 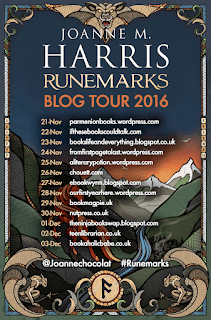