Ah 2016. What a year! I think my 2016 has been better than lots of people's - I started Ninja Book Box, ran two bookshop crawls and gained a new brother in law along with other fun things. There's also been a lot of well documented awful this year, including closing the Ninja Book Swap to new participants which was a very sad day but necessary for my mental health! I've really found my friends in the bookish community this year though and I'm so grateful for everyone who's supported me in any way over the course of the year.

This being New Year's Eve, what better way to spend it than by collating the stats of all the books I've read this year? I was going to do Jamie's End of Year Survey (and may still) but my attention span is crap at the moment, so here we are.

I read 90 books this year and this pretty stats picture I made will give you the general idea. Basically... 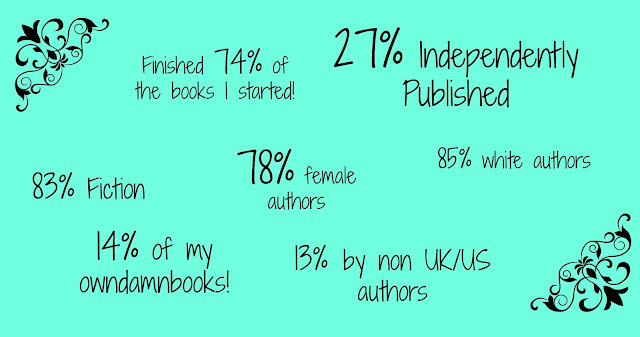 The only stats on here that I'm proud of are the number of books I finished and the percentage of female authors I read. The rest are pretty shocking, but I turned them into a pretty picture because it's important to pinpoint where you need to do better.

I'm hoping my Read the World Project will help with some of these, and I'm signing up for #ReadMyOwnDamnBooks again in 2017, plus the Spending Freeze means I won't be buying books except for on bookshop crawls so that should help too. Besides that though I'm giving myself permission to read whatever the hell I want during 2017.

My year of reading indie has been a massive failure stats-wise, but in terms of awareness I'd call it a huge success. I spend far more time looking for independently published books in chain bookshops now and am far more aware of small presses and what's coming out from them. I also started a business dedicated solely to the promotion and discovery of independent publishers (Ninja Book Box, check it out) which has been a massive thing and is already causing big changes in my reading life so watch this space for more of that next year!

How's your reading year been?
Posted by anarmchairbythesea at 21:19