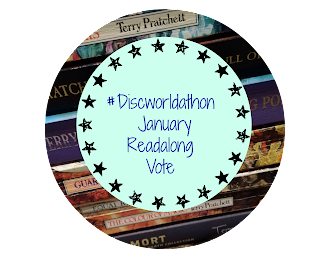 I'm back with another post about Discworldathon! I'm in the full throes of planning January now and I've put a poll up in the Goodreads group so everyone can vote on a title to read-along together in January. In case you're a Discworld newbie and have no idea about the titles included here's a little more information to help you make up your mind!

The Colour of Magic is the first Discworld novel, but even Terry Pratchett didn't think it was that great (as he mentions in A Slip of the Keyboard and other places!). Not to talk it down, as it's a great book, but the majority agree it's not the best place to start - it's not as funny as some of the later books, and Pratchett hadn't really developed his Discworld style yet. It's about Rincewind (who you'll be encountering a lot more throughout the year!) a more than slightly inept wizard, and Twoflower, a tourist with a trunk called the Luggage which has hundreds of tiny legs...

In this Discworld installment, Death comes to Mort with an offer he can't refuse -- especially since being, well, dead isn't compulsory. As Death's apprentice, he'll have free board and lodging, use of the company horse, and he won't need time off for family funerals. The position is everything Mort thought he'd ever wanted, until he discovers that this perfect job can be a killer on his love life.

This is the first book I fell in love with, and I continue to be a big fan of the Death books. I'm particularly excited about Hogswatch in December!

On Discworld, a dying wizard tries to pass on his powers to an eighth son of an eighth son, who is just at that moment being born. The fact that the son is actually a daughter is discovered just a little too late. The town witch insists on turning the baby into a perfectly normal witch, thus mending the magical damage of the wizard's mistake. But now the young girl will be forced to penetrate the inner sanctum of the Unseen University--and attempt to save the world with one well-placed kick in some enchanted shins!

If you were reading in order of publication, Equal Rites is the book I'd start with because it's the first one that feels Discworld to me, and also it's funny and feminist as. So there's that.

Here there be dragons . . . and the denizens of Ankh-Morpork wish one huge firebreather would return from whence it came. Long believed extinct, a superb specimen of draco nobilis ("noble dragon" for those who don't understand italics) has appeared in Discworld's greatest city. Not only does this unwelcome visitor have a nasty habit of charbroiling everything in its path, in rather short order it is crowned King (it is a noble dragon, after all . . .).Meanwhile, back at Unseen University, an ancient and long-forgotten volume--The Summoning of Dragons--is missing from the Library's shelves. To the rescue come Captain Vimes, Constable Carrot, and the rest of the Night Watch who, along with other brave citizens, risk everything, including a good roasting, to dethrone the flying monarch and restore order to Ankh-Morpork (before it's burned to a crisp). A rare tale, well done as only Terry Pratchett can.

The first in the City Watch series which is probably my favourite of the mini series.

Kingdoms wobble, crowns topple and knives flash on the magical Discworld as the statutory three witches meddle in royal politics. The wyrd sisters battle against frightful odds to put the rightful king on the throne. At least, that's what they think...

Technically this is the second Witches book, but Equal Rites has witches and wizards so.

You can vote in the poll here once you've joined the group, which I strongly encourage even if you're only planning to join in for a month or two (or less!). 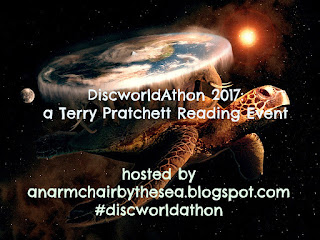