Beginning to Read the World

I've been talking about diversity for a while and I've even mentioned wanting to read a book from every country in the world more than once in the past on the blog, but now I'm actually going to do it. With a little nudge from my friend Louise I've been inspired to join her in her #readtheworldproject.

I'm planning to read a book from every country in the world by the time my 35th birthday rolls around in 2022 (eek it sounds so far away!), so this is an ongoing project... I am going to include a couple that I've read fairly recently but mostly I'll be starting from scratch. The idea is that in as many cases as possible I'll read books by authors originally from that country, but where that proves difficult or impossible then I'll be going for books set in that country instead.

First up I'm ticking North Korea off my list because in the last couple of weeks I finished In Order to Live; Yeonmi Park's incredible, inspirational memoir of how she and her family escaped from North Korea.

Today I went to my bookshelves and pulled off everything I could see that I owned which fit in with the criteria. I felt good about it until I realised that this pile represents less than 10% of the countries in the world... I have a lot of reading to do! I thought it would be good, since I've been such an absent blogger of late, to post about this challenge in small stages and set myself smaller, more achievable goals. A TBR of 15 doesn't seem too overwhelming to keep in the corner somewhere, so here's my starting line of countries! 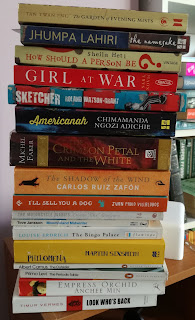 Canada : How Should a Person Be? by Sheila Heti

Finland : Moominland Midwinter (or anything else by her, really) by Tove Jansson

France : The Outsider by Albert Camus

Germany : Look Who's Back by Timur Vermes

Ireland : Philomena by Martin Sixsmith (I will probably find another book actually by an Irish author to read for this as well)

Malaysia : The Garden of Evening Mists by Tan Twang Eng

Mexico : I'll Sell You a Dog by Juan Pablo Villalobos

The Netherlands/Australia/Scotland : The Crimson Petal and the White by Michel Faber (who has a whole section on his nationality in Wikipedia because it's so confusing!)

Spain : The Shadow of the Wind by Carlos Ruiz Zafon

Thailand : (unpictured) The Sad Part Was by Prabda Yoon

I'm looking forward to the London Bookshop Crawl in February to stock up on some titles from other countries. Feel free to leave me any and all recommendation in the comments!