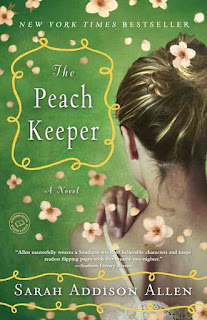 You know when you're a little kid and you can't sleep at all Christmas night because you're *just too excited* about what Santa will bring? I am like that when I know people are going to send me RAK's. Not that I don't sleep, but I do literally hold my breath coming in my door every day to see if they have arrived yet, and I am always super psyched to open them and see what I've got. This month, I got The Peach Keeper (thanks again, Laura!) which is the last remaining Sarah Addison Allen book I hadn't read. It also just happens to be set in North Carolina, and so it counts for the 50 States Challenge!

I don't think I can overstate how much I love Sarah Addison Allen. I first discovered Garden Spells last year and fell in love. Her books are about magic, food and the meaning of home and every time I read one of them I get all nostalgic and have an overwhelming urge to bake...

Here's a synopsis of The Peach Keeper from Goodreads:

It’s the dubious distinction of thirty-year-old Willa Jackson to hail from a fine old Southern family of means that met with financial ruin generations ago. The Blue Ridge Madam—built by Willa’s great-great-grandfather during Walls of Water’s heyday, and once the town’s grandest home—has stood for years as a lonely monument to misfortune and scandal. And Willa herself has long strived to build a life beyond the brooding Jackson family shadow. No easy task in a town shaped by years of tradition and the well-marked boundaries of the haves and have-nots.

But Willa has lately learned that an old classmate—socialite do-gooder Paxton Osgood—of the very prominent Osgood family, has restored the Blue Ridge Madam to her former glory, with plans to open a top-flight inn. Maybe, at last, the troubled past can be laid to rest while something new and wonderful rises from its ashes. But what rises instead is a skeleton, found buried beneath the property’s lone peach tree, and certain to drag up dire consequences along with it.

For the bones—those of charismatic traveling salesman Tucker Devlin, who worked his dark charms on Walls of Water seventy-five years ago—are not all that lay hidden out of sight and mind. Long-kept secrets surrounding the troubling remains have also come to light, seemingly heralded by a spate of sudden strange occurrences throughout the town.

Now, thrust together in an unlikely friendship, united by a full-blooded mystery, Willa and Paxton must confront the dangerous passions and tragic betrayals that once bound their families—and uncover truths of the long-dead that have transcended time and defied the grave to touch the hearts and souls of the living.

Resonant with insight into the deep and lasting power of friendship, love, and tradition, The Peach Keeper is a portrait of the unshakable bonds that—in good times and bad, from one generation to the next—endure forever.

Friendship, love, and tradition pretty much covers it. It's not a particularly complex plot. Willa's family used to be rich, Paxton's family are still rich. In high school Willa liked to pull pranks which were attributed to Paxton's twin brother, Colin, until the last day when Willa finally announced that she was the 'Walls of Water High School Joker' to the world. Her classmates, especially Colin, still expect her to be the same as she was back in high school, and when Colin comes back into town for the opening of the hotel he finds out how much she has changed..

As ever food is involved although to a lesser extent than in either Garden Spells or The Sugar Queen.
In this case it's coffee. Willa runs an outerwear store which also has a cafe producing products containing coffee. I have to say I don't like coffee, but some of the stuff sounds amazing - you can get some recipes at Sarah's website, and I may well be giving them a go in the not too distant future!

The characters in The Peach Keeper were a little predictable, but in a good way; in the end all everybody really wanted was to come home and be loved and accepted, which is probably all most of us want, really. I guess that's part of why I like Addison Allen's books so much - she always seems to strike the right kind of note to resonate with me. I can almost always see myself somewhere in her books, and I love that. Also, all of the characters care and that's unusual. Although Paxton and Colin and even Sebastian, Paxton's gay best friend who turns out not to be gay/man she's secretly in love with, are a little bit mixed up and their stories are a bit tangled and confusing, really all they want is for the people they care about to be happy. With the world in the state that it's in at the moment (and yes, I know I'm always going on about this!) it's really nice to read something where nobody has ulterior motives and people look out for each other rather than trying to destroy eaach other or drag each other down.

So basically, yay for The Peach Keeper. It was snuggly and comforting and magical and I loved it!
Posted by anarmchairbythesea at 10:45