The blog tour for Ninja Book Box kicks off today. This post was originally going to be on the book box website but that's still in the throes of being optimised for mobiles so I thought while that's happening I'd post here, since I haven't in aaaaaaaages and people (who don't follow me on twitter) may think I'm dead. Anyone on twitter is in absolutely no danger of thinking that since I never shut up there. It starts for real tomorrow with three different bloggers, but I'm bookending the tour here and on the Ninja Book Box website, where I'll be posting a wrap up once it's all done!

Anyway! In case you haven't heard, Ninja Book Box is my new brain child. It's a quarterly book box that I started prompted by my inability to find a book box catering to a variety of genres and promoting the discovery of independently published titles. Most of the non-YA book boxes out there are based in the US and the postage makes them prohibitively expensive for people such as myself, so I thought that it might be fun to throw my hat into the ring. Authors are always being told to write the book they want to read, so I thought why not make the box I wanted to buy?

Because I'm poor (due to buying too many books, only working part time cos of small people care etc) I decided to launch a Kickstarter to fund the startup costs and costs of the first box and woohoo it's more than met my initial target. As you can imagine all this has been very exciting and I've spent a lot of time running around in circles waving my arms. Equal amounts of time curled up in a small ball freaking out that nobody will like what I've made, but we'll gloss over that part...

The box is currently only available by backing the Kickstarter (or entering the giveaway at the end of this post) and it's going to be pretty awesome. I'm excited! Here's a little teaser picture: 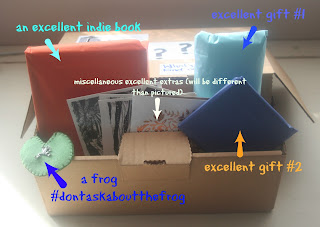 Your box might look like this, or it might not, it's all very mysterious really. The only thing I can guarantee you is that I will think that it's excellent, because if I didn't honestly believe that it's the most awesome thing I'm capable of putting together then I wouldn't be doing it!

If you want to have a little fun on twitter check out #dontaskaboutthefrog and you can also tell me a story about how you think the frog ended up in the picture. Use the hashtag, there might be prizes, and some of the stories already on there will probably make you giggle!

The blog tour is running for the next two weeks with people doing feature posts and q&as, their own posts about indie publishers and titles they love and their experiences with indies in general, and guest posts from me on all sorts of things! Follow the tour if you want and help us spread the word using #ninjabookbox. If you want to back the Kickstarter it runs until October 2nd and you can do that here.

The giveaway is international, so please enter it wherever you are in the world! If you're receiving a box as a Kickstarter reward you're still welcome to enter. If you win you can either get an extra box for a friend or redeem the February box for free! 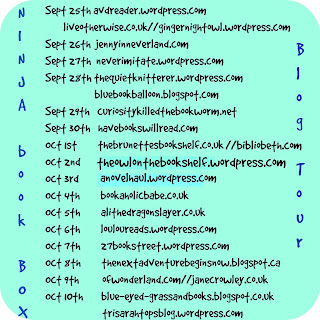