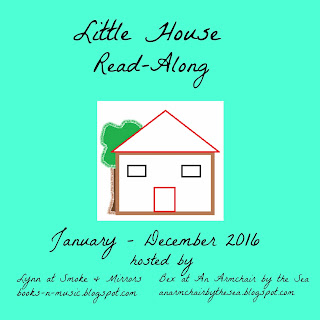 I can see a pattern emerging here... Each month I will dutifully read and enjoy the book and then entirely forget to actually post about it until right at the end of the month! Ah well, at least it's still February!

This month we read Little House on the Prairie for the Little House Read-Along hosted by Lynne and myself and although I'm sure I must have read it as a child I have absolutely no memory of it. I really loved the cosiness of Little House in the Big Woods, but although this has something of the same feel to it it's definitely a more danger-filled book.

At the beginning of the book the Ingalls family sell the house in the big woods and head for the prairie, where Pa has been reliably informed that the government will be 'moving along' the native people and giving the land to the white settlers. When they leave the woods they don't take the bed or the furniture because Pa can make new ones. This remains one of my favourite things about this series so far, and a strong reminder of how generally useless the majority of people are nowadays. I know maybe one person who could make a bed without thinking about it, let alone build a house by himself (or with occasional help from neighbours), but how fantastic to be so sure of your ability to provide for your family - not just financially but actually. It inspired me to learn more useful practical skills.

There was a lot of fairly casual racism in this book - at one point one of their neighbours says that the only good Indian is a dead Indian, and various characters make really broad generalisations about people that they freely admit to having little to no actual experience of, but then I suppose this is one of the things about reading the experiences of somebody at that time, and especially somebody who was a child at the time.

I did think that Pa Ingalls was much more open minded and tolerant than most of the characters in the book, despite basically just hanging round til the government kicked the natives out so he could steal their land. He explains a lot to Laura throughout the books so far, and especially in this one, and it meant that as a reader I got at least a little background about the tribes and the situation. Although obedience is strongly encouraged in Laura's family, I really like how much time her parents spend talking to her about things.

I felt that this book had a lot more actual storyline than the previous one - a lot more happens in it, and because of its setting I felt like I was learning more about actual events than I had in the previous book. I'm fairly involved in Laura's story now and slightly don't want to veer away from it to read Farmer Boy next month, but I'm sure it will be great!

Apologies for the fact that Lynne's and my linky doesn't seem to be the same this month, my fault entirely, but I will make sure that everyone's posts are linked up on both blogs.

We didn't do a craft this month, because our skills don't extend to house building or well digging. We are going to have steak with cornbread at some point, like they do when Pa helps out the cowboys, but I was really encouraged by Little House on the Prairie to fill in the vast gaps in my knowledge of Native American people and history. The only characters I've ever come across in literature that are of Native American descent are Jacob from the Twilight series, Jonah from If I Fall,If I Die by Michael Christie and Junior from The Absolutely True Diary of  Part - Time Indian, so I asked twitter for recommendations and have come up with a bit of a reading list which I'll share here in lieu of lovely craft pictures!

If you have anything to add to this list, please feel free to let me know in the comments, I appreciate recommendations!

Make sure you check Lynne's blog next month, where she is the host for Farmer Boy!
Posted by anarmchairbythesea at 14:47