Books on my Bedside Table #5

You may have seen that the other day I posted my 2016 Goals post. As you'll be able to tell from these photos I'm already not doing too well with some of them (namely #ReadMyOwnDamnBooks). The library has been calling my name and I'm finding it hard to get out of the habit I so brilliantly formed last year of reserving things at the library instead of buying them. It was great then, but I need to stop it now! Because I've got so much great stuff that I'm reading or looking forward to at the moment, this post is really two posts; a Books on my Bedside Table for the books that I'm currently reading or have just finished, and another pile of books that have recently entered my house. I'm out of the habit of doing book haul posts as I haven't really had any for the past few months so excuse me while I get back into the swing of things!

Without further ado, this is the pile of books I'm currently reading: 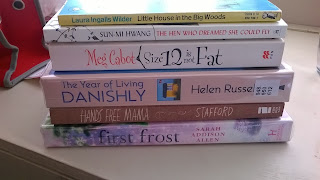 The top book is Little House in the Big Woods by Laura Ingalls Wilder which I just finished for the Little House Read-Along and will be writing about in the next few days. If you haven't signed up yet and want to take part, we're doing it all year and you can sign up any time!

Underneath that is The Hen Who Dreamed She Could Fly by Sun-Mi Hwang. I'm only a little way through but I'm enjoying it so far and it has such a beautiful cover. For more on the reasons behind this book see the next Make Mine an Indie post coming up next week!

I finally pulled Size 12 Is Not Fat by Meg Cabot off my shelf earlier in the week and have been really enjoying it. I've owned it for years and have never read anything by Meg Cabot that isn't The Princess Diaries series when I was much younger, so it's nice to read something slightly different.

I keep getting distracted from it by The Year of Living Danishly by Helen Russell, which I talked about in my post on Icon Books, and reserved from the library when I bought it for Heather for the Nonfiction Book Swap a while back. Karen Russell moved from London to Denmark when her husband got a job working for Lego (!!) and spent her time researching all the reasons why Denmark is the happiest country in the world. It's really interesting so far, as their way of life is very different to mine!

Hands Free Mama by Rachel Macy Stafford I've actually already finished, but it's divided into twelve parts with hands free intentions for each month and as part of my One Little Word this year I'm planning to work through it a chapter at a time over the course of the year. This week I've been setting myself a time period each day (at the moment 30 minutes in the morning and 30 minutes in the afternoon) where I put away the phone, laptop etc completely and just focus on doing something with the kids. It's mostly been really nice, and means we're actually playing with all the games they got for Christmas, as well as having lots more giggles and snuggles.

I decided that it was time for a Sarah Addison Allen binge and as she has two books out that I haven't yet read and the library had them both I decided to order them in. This was only a couple of days ago and I went to pick up something else today and there they were. First Frost is the sequel to Garden Spells which I read and loved in my first year of blogging, so I've dived straight in. If you're looking for some magical (and full of magical recipes) reading I'd really recommend anything by Sarah. 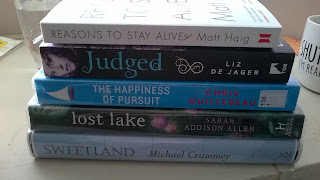 My incoming pile isn't that much smaller, to be honest! We celebrate epiphany in our house, and ever since we were little kids the three kings have brought us a present on January 6th, on their way to visit baby Jesus. I've carried on this tradition in our house, because presents, and I bought myself Reasons to Stay Alive by Matt Haig because it seems like an important book to read, and because he's great on twitter. Also it's published by an indie (Canongate). Judged by Liz De Jager arrived unsolicited from the publishers this week and is about a woman who solves supernatural crimes. It sounds pretty cool and is out January 14th from Macmillan so I'm hoping to get to that pretty soon.

The Happiness of Pursuit by Chris Guillebeau I saw on Kim's Instagram and was immediately intrigued by. It seems like it will tie in well with my whole happiness/gratitude/calming down thing. Lost Lake is the other Sarah Addison Allen book I requested from the library, so I'm pretty sure I'll read it straight after First Frost, and Sweetland by Michael Crummey I've been hearing about everywhere for ages. It was in so many people's Best of 2015 posts that I just had to ask the library to get it for me!

As you can see, five out of nine of these are my own books. Only two are books I owned prior to the start of 2016, so I'm pretty much failing at reading my own books so far, but I'm sure you'll agree that these books were too good to resist!