Things That Make Me Happy

I'm joining in again with Ellie's Things that Make Me Happy idea. I love this as it forces me to go back over the week and remember the awesome stuff which in turn also helps me to see it on a daily basis and stress out less about the negative things so thanks Ellie!

This week the weather has been so so weird; rainy and windy one minute, glorious sunshine the next, so we've had some strange days and some stressful days but overall it's been pretty good.

1. The garden. Everything is shooting up at the moment it's amazing. Every time I look out the window the potato bed has got bigger and there are more strawberries ripening! A lot of stuff won't actually bear fruit until next year but still it's great to see it all getting going. I'm also getting really into flowers after being way more of a practical 'let's only grow it if we can eat it' kind of girl for years. They're so beautiful and happiness inducing and cheap. Awesomeness. 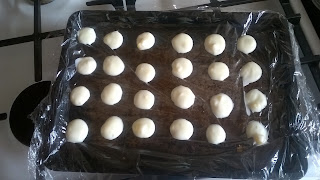 2. Frozen yoghurt drops. I found the idea for these on Pinterest and have no idea why I haven't tried them before. You literally put clingfilm on a baking tray and then put little spoonfuls of yoghurt (ours was apple and mango but any flavour will do) on the clingfilm and stick the tray in the freezer for half an hour. Then you peel the little dots off and eat them and they are the most delicious and refreshing thing ever. I'm in love.

3. Making stuff again. Although I've been making things daily for my #yearofmaking project I feel a little like it's been mostly cookery based lately, which I always view as the easy way out because dinner has to be made anyway! This week I started making a quiet book for Ben's birthday despite it not being until October and Sam's birthday being in a couple of weeks (on the same day as mine if anyone's taking notes) and me not having anything for him yet. I have plans though! I'll be posting about this in more detail for a future Inspiration on Monday post!


4. Six Second Hugs. I've been reading The Happiness Project and Happier at Home by Gretchen Rubin lately and I don't remember which book it is but she mentions that if you hug someone for six seconds or longer you instantly feel more connected and affectionate than if you do it for shorter amounts of time. I was skeptical but this is an actual thing you guys. Six is the magic number, give it a go!

5. #30dayswild. We're taking part in The Wildlife Trust's challenge to do something wild each day during June. So far we've done a lot of garden work, planted some seeds, done some wildlife identification and been for a lot of clifftop and coastal walks. I'm excited about making a butterfly feeder this week and going for a walk along the river and feeding ducks with the boys. It's been really good having something to push us to go outside and explore each day.

If you want to link up things that have made you happy this week you can do that here and use #sharethehappy on twitter and Instagram. I dare you, it will make you feel awesome!
Posted by anarmchairbythesea at 20:02