Things That Happened in October

Hi everybody! It's me, you might not recognise me because I've been a totally crap blogger recently, but I've been busy!! Lots happened in October, starting with this: 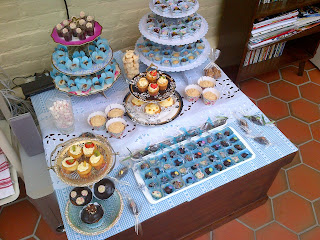 Benji had two parties for his first birthday, because most of our family and friends are still London based at the moment, but the picture is from his second party at my Aunt and Uncle's house, who now live just up the road from us. It ended up being just a little gathering, with my cousin and her partner but you wouldn't have known it from the amount of sweets and cupcakes my Aunt made (yes, made from scratch, by hand and they were yummy). We were eating them for a while :-) That took up a couple of weekends, and then there was this, which I have already blogged about: 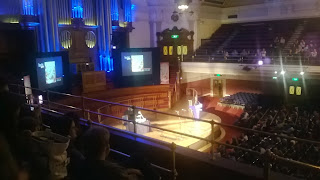 That's a very blurry picture of the Neil Gaiman event from where we were sitting. The view was much better than it looks from this, and I'm really glad this was such a great event because it's really inspired me to try to go to more author events next year!

Also this month was the Halloween Ninja Book Swap, and although I'm still waiting for one of my parcels to turn up I think I've waited long enough so I wanted to put this up and thank the lovely Becky of Becky's Barmy Book Blog for sending me this parcel of awesomeness! 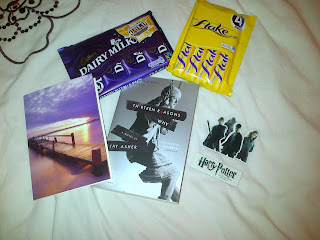 In case you can't see, it contains a 4 pack of Dairy Milk bars, a 4 pack of Flake bars, Thirteen Reasons Why by Jay Asher which I read loads of great reviews of during Banned Books Week this year, and some awesome Harry Potter magnets plus a lovely card :-) The chocolate disappeared veeeeerrry quickly and I'm waiting for the right moment to start on the book!

Finally this month I decided to bite the bullet and host my first ever readalong in December. If you'd like to join in and read A Tale of Two Cities with us, you can find the details and sign up link here.

In bookishness this month, I have actually read quite a bit for me! Books I've finished are thus:
I am hoping to write about Good Omens, Fables and The Fearless Treasure in the next week, but we shall see how it goes. My first craft fair is sneaking up on me ridiculously quickly and I've also had a few orders to work on, which is nice, but has left me no time to do much else! So that's it from me and this is something I've made this week that I love :-) 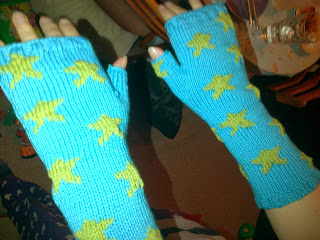