Showcase Sunday - Being a Baby gets you loads of stuff...

This week I decided I should start doing weekly showcases of the books that have come into the house, so that I can easily keep track of where our books come from. I swear sometimes they just appear without me even having any clue how they got there! Obviously, because I decided to do this, the week then went ABSOLUTELY INSANE. Admittedly, most of these are Benjamin's books, not mine, but to be honest I love these kinds of posts and we have been ridiculously lucky this week, so if you're bored by posts with lots of pictures and lists of books, stop reading now. You have been warned....

This weekend we went to see some family, and Rhys' dad's friend gave us a box of children's books she'd been saving for Benji from the charity shop where she works. I expected there to be a few, but I didn't expect this: 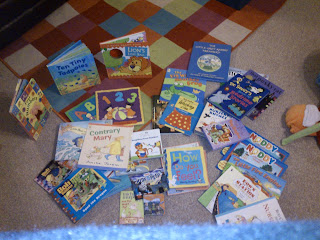 Apologies for the horrendous photography, but just for information purposes, there are 31 children's books in this photo. Loads of board books, pop up books, books to teach him about counting and the alphabet, picture books. It literally goes on and on. It was the best box I've opened since the box of awesome Hanna sent us when he was born! Horrendously, though, I just inputted all the books into my spreadsheet (yes, I have a spreadsheet for books, I'm a huge geek, I know) and then hit 'no' to the do you want to save this option. So now I have to do it all again, because I am crazy. I'm not going to list what's in this picture, because I think even I would get bored. Also, I have no point of reference, because of the deleting them from the spreadsheet malarky...

Also waiting when we got back from our weekend at my parents' were three parcels from Amazon. As previously mentioned, Hanna got Benji a voucher for Christmas, which I spent, and there was also a present from Laura for us both waiting. This is what was in the parcels: 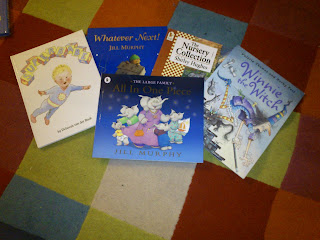 With Hanna's voucher I bought:
Whatever Next! also by Jill Murphy (for those who know their Jill Murphy, it's the one where the bear goes to the moon wearing a colander on his head!), and also a copy of I Remember Nothing by Nora Ephron (for me!) were from Laura and Benjamin and I just want to say that we love you both!

Lastly, Rhys and I had a day off from baby raising on Saturday and went to watch Les Miserables in the cinema (I am a massive fan of the stage show and just in case anyone's wondering if the film's good, it is!), and we had a wander around some charity shops while waiting. I spent a grand total of £4.50 and here's what I got: 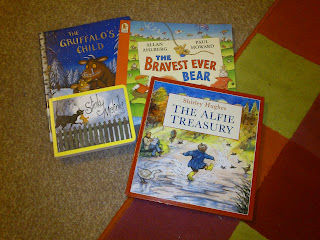 Also this week, Rhys' dad sent me a copy of Good Omens and one of Extremely Loud and Incredibly Close that somebody had given him. Terribly, and despite being a gigantic fan of both Gaiman and Pratchett, I haven't yet managed to finish Good Omens. My copy went awol half way through so I never finished, so here's my opportunity!

The last thing I want to showcase is my brand new shiny copy of Stitch N Bitch Superstar Knitting by Debbie Stoller. When I made my resolution about my book buying ban, this was the one book I was allowed to buy for myself this year, and pretty much a day later it was on eBay for £2. So, now I have it and while that may not seem exciting to some of you I assure you that it is, because it means that I can now learn how to do really pretty stuff and even write my own patterns!

It's been a ridiculously good week here. There may in fact never be a week as good in terms of book acquisition again.

How's your week been?
Posted by anarmchairbythesea at 21:03