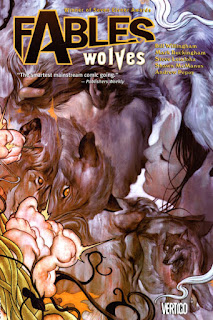 Because I’m reading ridiculously slowly lately, there’s really no excuse for me not to review things pretty much as I finish them, provided Benji’s being ok. I’ve been reading The Unlikely Pilgrimage of Harold Fry by Rachel Joyce, but you know how it is when you’re reading something and it’s really good but after a while you just kind of feel in the mood for something else? Since Fables is part of my reading for both The Graphic Novel Challenge and the Telling Tales Challenge and since I know graphic novels are quick, I took Wolves and had a long bubble bath. It was awesome.

Basically, Wolves follows straight on from where Arabian Nights (and Days) left off and sees Mowgli out looking to find Bigby and bring him back to Fabletown for a special mission. The book is split between Mowgli’s mission and the Farm where Snow White & Bigby’s children are facing their own dilemmas. It’s pretty much a continuation of the Fables’ struggle against the Adversary and in the spirit of not ruining any plot twists for those of you who want to read this series (and you really should be reading it if you’re in any way into fairytales) but haven’t got as far as this.

There weren’t any major new characters introduced in this volume, and it wasn’t as gripping as some of the previous volumes have been. It was still great though, because they all are, but it kind of felt like a ‘middle of the trilogy’ sort of book – like Willingham was just trying to move the story along and setting the groundwork for something much bigger to come in the next volume. It was solid, but there were no fireworks.
Can I just say though, I seriously love Bigby Wolf. He is just too cool and [SPOILER] in this volume he and Snow FINALLY get it together!! Also their kids are just too cool – being able to turn into a wolf and to fly would be just the best thing ever. As always, Wolves is beautifully drawn  and it super sucks that I can’t buy the next one because of my silly book buying ban!

And now I’m off to read some Nora for my Essay reading project!
Posted by anarmchairbythesea at 21:32