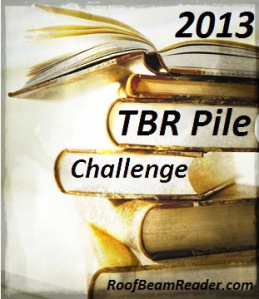 This year I’ve decided to sign up for Adams' TBR Pile Challenge. In 2012 I’ve been entirely unsuccessful with the Mount TBR Challenge, but this challenge requires me to read fewer titles, and coupled with my annual renewing of my book buying ban (see below), it seemed worth a go!


And in case one of the books on the list disagrees with me, my alternate is Started Early, Took My Dog by Kate Atkinson.

As mentioned above, I plan to reinstate my book buying ban in 2013, with the added incentive of the last three months of my maternity leave being unpaid and so needing to save as much as possible in the first four months of the year! Exceptions to the ban are if people get me gift cards for birthdays or whatever then I’m allowed to buy books. Ditto with money given as a gift. I’m not actively using ReaditSwapit at the moment, as I decided the other day that the 90 odd books I had listed on there had been sitting around the house getting in the way for way too long so I took them all to the charity shop! However, if I do start using it again this year, I’m only allowed one swap a month, and all other books I want to read must be received as gifts, or borrowed from family and friends or the library.
In 2011 I went three whole months without buying a single book. This year I lasted about a week. Wish me luck for 2013....
Posted by anarmchairbythesea at 10:44