What I've Been Doing While It's Been Quiet...

I may have kind of forgotten to mention here that I was going away for 9 days... so, I went away for 9 days, which is why it has been a little quiet around here. We haven't had a proper holiday for a very long time, and it was definitely much needed. We had Olympic tickets for the first day of athletics at the stadium, so we planned to go to London to stay with my mum overnight for that, then stay with some friends down in Devon for a few days, and then come back to parents for the final of the women's football which we also had tickets for, and then visit some other family friends on the way back to Kent over the weekend. 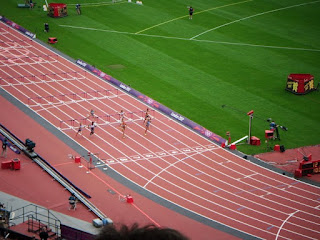 So, Friday we got up at about 6am and trundled off towards Stratford. Despite signal failure on the Central Line and the fact that everybody on the train seemed to be incapable of standing, the journey was far less horrendous than I'd thought, and we were super excited about the athletics! The stadium was awesome although I did have to be physically propelled up the last few steps to our seats (in row 72 of the top of the stand!) - we were sat right over the finish line so we had a brilliant view! We took lots of pictures, but this is my favourite. It's one of the heptathlon 100m hurdle races - unfortunately it isn't Jess Ennis running her awesomely fast heat, but we were a bit distracted with screaming and arm waving while she was running! We also saw the heptathlon high jump, which was pretty amazing :-)

We were meant to be going down to Devon that night, but by the time we got back on the train we were so tired we thought it was probably better to leave the 4 hour drive till Saturday morning. Somehow (due to some weird navigating by yours truly and the decision to take a detour around Bath), the 4 hour drive became the 6.5 hour drive, but we eventually arrived. The house where we were staying is where my family used to have our annual holiday every year of my life until I was around 15, so I'm hugely nostalgic about it and with good reason. Isn't it beautiful? 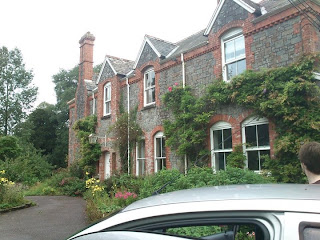 
We had four days down there, but only three days of really doing things as the day we arrived we pretty much sat around catching up with our friends and watching the Olympics. We did lots of active person things (crazy golf, visited an awesome ford in Exmoor, went to a museum full of old fairground rides, took a train which travels along the coast right next to the sea, went to an aquarium, bought lots and lots of books...) and had a brilliant time, despite typical British weather! On the way home on the Wednesday we went via Salisbury. Since working at one, I've turned into a total cathedral geek, so we had a bit of a wander around the grounds of Salisbury Cathedral and did a bit of awesome charity shop shopping, during which I didn't buy any books... (except the three books I bought *shifty eyes*).

Then we made our way back to my parents house, and pretty much just hung out that evening. The next day was one of my best friends' birthdays, so we took her out for lunch and then went to do some more shopping in the area I used to live in. Neither hubby nor I were feeling 100% after that so we gave our other Olympic tickets to my mum and one of my sisters, and they had an awesome time. AND THEN on Friday we went to the beach down in the New Forest with the family, and went to the place where Rhys proposed to me over two years ago! We had a lovely lovely day of swimming and splashing and climbing and trying to catch crabs and came home very very sunburned.

In book related news, I finished both The Taste of Sorrow by Jude Morgan and The Girl Who Circumnavigated Fairyland in a Ship of Her Own Making by Catherynne M. Valente this week, and they have both gone on my five star book list. I also somehow managed to acquire eight books in nine days, which I'll post about at another point in time. Today, we've just been pottering about, stocking up on groceries, and I've been freaking out (as per usual) about baby stuff. 32 weeks today so we've really not long to go now and we still don't have a matress for the cot or a chair in which I can actually sit without getting stuck, but I'm sure it will be fine! I am now officially on maternity leave (just in time for Bout of Books this week!), so will have ample time for freaking out and stuff provided baby doesn't come early!

What has everybody else been up to while I've been away? ﻿
Posted by anarmchairbythesea at 16:50