I haven't done one of these for a while, and while I've only bought a couple of things for him, other people have been giving me stuff and when I looked back through, there's quite a lot I've not put on here, so here goes. As usual, this post will be full of pictures and lists. You have been warned... 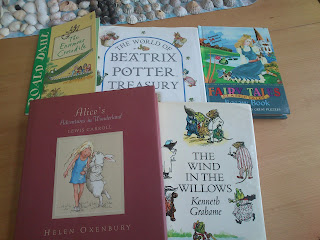 There are only two books that I actually bought for him in this picture. The others are all second hand:

The Enormous Crocodile by Roald Dahl - this was one I bought, but it cost like 20p. We had a little bit of a Dahl collection going on even before we found out about the baby, but we've never had this one and it's one of my favourites. Also it has cool illustrations (of course).
The Beatrix Potter Treasury to go with the Beatrix Pottery Nursery Rhymes I bought before. This was donated by my sister :-) He also has a fair few of the individual Beatrix Potter books, but I can never bring myself to include them in a post as there's about twenty of them!
Fairy Tale Jigsaw Book - I found this in a charity shop the other day and it's brand new. It has lots of little fairy stories and then a jigsaw puzzle on the facing page. Obviously he won't be able to do it until he's a bit bigger but it was lovely so I couldn't resist.
Alice's Adventures in Wonderland by Lewis Carroll, illustrated by Helen Oxenbury (who also illustrated We're Going on a Bear Hunt). I know, I know, I have a bit of an Alice addiction... I think this is our fourth copy? But it was donated by another sister, and we didn't have a proper children's version as such. Also, it's rude to refuse when people offer you free books!
The Wind in the Willows by Kenneth Grahame - this was my copy from when I was really little! My parents have just moved house and I was rummaging around their bookshelves as per usual while we were staying last week and found it, so I thought I'd bring it home for the baby. The dustjacket is a bit ripped, probably due to my phase of keeping books in the end of my bed, but it's got lovely illustrations and I remember being entirely in love with it for years :-)

So that's it for now. Anybody got any favourites that I absolutely must get for him right now?