I feel especially domestic this Sunday - I've not read much today so I thought I'd share some of the other things I've been doing, especially as I've been doing them:
a) while wearing a dress
and b) with an increasingly (and I'm talking bigger by the day here) big baby bump
I'm actually starting to feel like a pregnant person in the last week or two, and bump is getting heavier and more obvious. I tend to get stuck if I bend down now, which means it takes me at least twice as long to put my shoes on, but at the same time I've never appreciated chairs quite so much before, so there's silver lining! 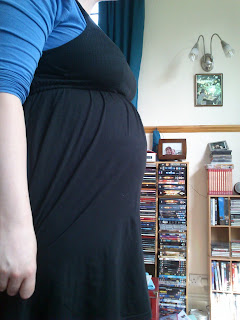 Lady with a bump!


We were supposed to be up in London today going to opera, but Rhys had an emergency trip to the hospital on Friday (it turned out not to be serious, just with alarming symptoms!), and has been sat at home with antibiotics the past couple of days, so instead of gallivanting, we're resting which is kind of a mixed blessing, because although I always like experiencing new things, and love going to new theatres, I'm still not too sure how I feel about opera...


Currently there is a Victoria sponge in the oven (after my entire life of using the recipe from my mum's beaten up old 'Food Processor Cookbook', I've succumbed to the beautiful pictures in The Great British Bake-Off Cookbook. I figure there must be a reason why Mary Berry is Mary Berry and I am not...), so we'll see how that turns out. I'm very excited about cake as there has been a slight deficit in the past week or so, and also we got some awesome raspberry preserve when my parents were here, which is going to be the best thing ever in the middle of the sponge.


I've mentioned briefly before that I'm quite into crafts and knitting, and I've been sorting out the craft corner (yes, we have a craft corner, because I'm especially cool) today. This is good, as it means I now know what I actually have and will spend less time rebuying things I already have. Also, I have embraced my childhood love of turning things into other things, and have turned a Bisto gravy pot into a holder for my knitting needles! I'm quite impressed as it's now vaguely pretty, although it does mean my needles smell a little bit like gravy :-s  However, it is obvious that I haven't covered anything with pretty paper in a fair few years, so it's a little bit wrinkly but I can keep all my needles together and actually be able to find them when I need them :-) 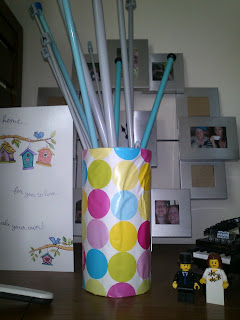 Pot, needles, and the lego cake toppers from our wedding. I forgot to move them!

Finally, I have started knitting what will eventually hopefully be a teeny tiny hooded cardigan for Mr. Baby. This is my first attempt at making anything that involves joining several parts together and I'm more than a bit nervous, but I have a pattern which purports to be for Beginners, and it doesn't look too awkward, so we'll see. So far I've almost finished the back and it's been easy, but to be fair it's basically a big square... 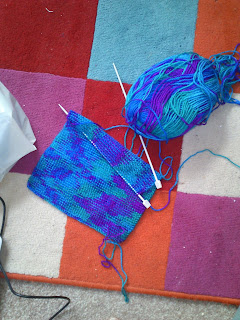 Purple. turquoise and blue wool, and almost the back of a teeny cardigan!

So there we go. No books (except cookbooks!), and I guess after that I'm going to have to embrace the fact that I'm rapidly descending, at the grand old age of 25, into middle - aged domesticity... Not sure how I feel about that, but oh well. It's been a lovely day so far despite the incredibly weird weather - sunny one moment and torrential downpour the next, but that's England for you I suppose. I'm in the middle of watching Andy Murray in the Wimbledon final, and there's roast dinner and cake on the way! Life's good.

What are you doing with your Sunday? :-)