I'm soooo bad at keeping up with reviews at the moment, so I thought I'd do another post with a few mini reviews to keep up to date with a few books that I enjoyed but don't have too much to say about. So, here goes.... 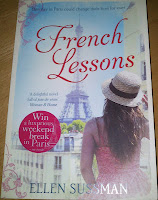 Set in Paris and divided into three stories, French Lessons is the story of three French tutors and their pupils. Over the course of a day it follows three characters whose lives seem very separate; Josie, an American French teacher mourning the death of her lover, ex-pat Riley, feeling isolated from her husband and with very limited French skills, and Jeremy, the husband of a wealthy film star.

The cover makes it appear light-hearted and to an extent it is, but it also goes deeper. By the end of the novel, the stories have become intertwined, and it really is about the power that people have to help other people, even if they are strangers. French Lessons is fluid and well written and pretty absorbing - I read it straight through in pretty much one sitting and it made me happy because it was really about love, and I'm a bit sappy and secretly adore love stories, especially the ones with happy endings.


A copy of the novel was sent to me by the lovely publishers, Canvas.

The Patchwork Marriage by Jane Green

Jane Green is one of my favourite authors of the 'chick lit' variety. Her last novel, The Love Verb, had me in absolute floods of tears by the end, and while The Patchwork Marriage wasn't quite on the same level, it was still pretty great. Green's novels always have a great atmosphere of family about them, and this is particularly interesting due to the subject matter.

When Andi meets Ethan, she thinks that she has met the man of her dreams but although his younger daughter, Sophia, is prepared to let her play happy families, his elder daughter Emily makes things very difficult. Just when Andi thinks she has had enough, a huge event shatters all of their lives and makes them all question what is really important to them.


The thing I enjoyed most in The Patchwork Marriage was the dynamic between the characters; all of the relationships, even the upsetting way in which Emily sometimes treated Andi, felt real to me, and throughout it seemed to be about people fighting for the things they loved and believed in, and Jane Green does passion very convincingly. She also portrays annoying, self obsessed teenagers in a wonderful way, which makes me think that she probably has some experience... Although hopefully not with any as awful as Emily is at various points! The book was pretty much what I expected, and I will definitely continue to be excited about everything she publishes!

I bought a copy of this book.

One Moment, One Morning by Sarah Rayner

I know you shouldn't judge a book by its cover, but the cover of this made it seem like it was going to be much lighter than it was. Basically it is centered around the events which take place one morning on a train; a man collapses and the novel deals with the fall-out of this on three characters; his wife, her best friend, and the girl who was sitting next to the couple on the train. Through the events that take place, they become involved in each others lives, and basically, it's about the importance of friendship, and about letting people in.

Sounds a bit schmaltzy, I know, but it really wasn't. Although the novel hangs around  a horrible event, it really isn't as dark as it should be, and it is a pretty good depiction of people's reactions in an extreme situation. Sarah Rayner is also pretty good at showing how one event can have a ripple effect on various other people's situations, and how something pretty unrelated to your own situation can make you rethink your own life.

I was given this book as a birthday gift.

We Bought a Zoo by Benjamin Mee 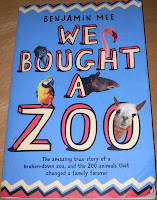 The film of this recently came out. I haven't seen it yet, but I do plan to at some point. I like this kind of memoir - where people do something other people see as being crazy and then write about it, and I like zoos, and I like Devon (where the zoo is), so it seemed like it would all be good from the get go, and it was.

The book pretty much does what it says in the title; Benjamin Mee and his family bought a zoo. A totally run down, failing zoo which was in tons of debt. The book is the story of how they turned to zoo from a failing wreck into a successful business. Also, it has tigers and escaping jaguars and wolves, so that's great. I really like animals, and Mee's writing style is very relaxing while still being quite immersive. I read the book pretty quickly and it's definitely staying on my shelves!

Thank you Hanna, first for reviewing it and making me want to read it, and secondly for sending it to me! :-)

Apologies for the awful book pictures (and total lack of picture for One Moment One Morning), I've done too much today and should be having a nap but just really wanted to get this finished and posted, as it's been far too long between reviews!!
Posted by anarmchairbythesea at 17:41