The Tenant of Wildfell Hall by Anne Bronte (Part 1...)

The baby is making me dizzy again and I have been sent home from work under orders to lie down and rest. Obviously this means I have to read, and what I'm currently reading is The Tenant of Wildfell Hall by Anne Bronte. I haven't finished it yet, but I am absolutely dying to talk about it. Although I hardly ever post about books before finishing them, I just can't restrain myself any longer! I ADORE this book, and what's more, it evens out my tally of Bronte books I've read; Charlotte Bronte - 1 (Jane Eyre - love it), Emily Bronte - 1 (Wuthering Heights - a little weird and not at all what Kate Bush and popular culture led me to believe, but still great), and now Anne Bronte, The Tenant of Wildfell Hall. (On looking back at the stats I'm surprised - I thought I'd read more Bronte, but maybe it's just that Jane Eyre was the first classic I ever loved, and Wuthering Heights took up so much space in my brain trying to figure out what on earth was going on and why would he dig her up after she was dead and stuff??!)


When I was on my honeymoon last September, we visited the Parsonage at Haworth and I fell in love. 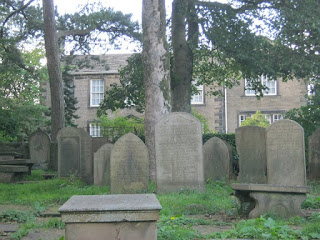 Okay, I know it's a bad photo, but I'm not the greatest of photographers at the best of times and I seem to have spectacularly failed during this particular trip. I also failed to take a picture of Anne Bronte's headstone in Scarborough... :-/ But anyway, if you're ever in the region (and I know that some of you are because 'the region' is where you live!) then I strongly urge you to go. It's just amazingly inspirational. They have loads of original Bronte artefacts and tonnes of information about the family which is really interesting, as well as some original manuscripts. You can also do a walk from there to the moors, which we didn't do because it was ridiculously windy, but which I really want to do next time we go - I keep pointing at pictures of moorland lately and saying stupid things to Rhys, like 'look, moors!'. He just looks at me till I stop.

So back to the point of this (although to be honest 'the moors' kind of are the point...) - Wildfell Hall. I'm currently about half way through the book and the thing I'm adoring most is that Anne Bronte just doesn't seem to be interested in writing characters for people to love. It's also not as clear cut as Jane Austen - the characters are not necessarily either good or bad,but feel like real people. Yes, some are fairly clearly not good people, but most are just human with good and bad traits who often do thoughtless and silly things, like Gilbert Markham, who occassionally reacts to things in an entirely inappropriate manner. For instance, you're angry with another man, of course the appropriate response is to smack him over the head with your whip and knock him off his horse. Then, when you see that he's bleeding, you should absolutely just ride off and leave him, before coming back, offering assistance, and then taking offence and leaving again when the man you've just nearly killed quite reasonably doesn't want your help. WHAT?! I'll be honest - up until this point (and even after it), I quite liked the guy, but really wouldn't it have been easier to just explain why you're angry and talk it out like civilized people rather than acting like a child - a child with a big whip, admittedly but still a child.

I also love the style of her writing. During the first part of the novel, during which Mrs Graham and her son Arthur have come to live at Wildfell Hall and have come under scrutiny from the local community, I have turned over so many pages which contain memorable passages I want to use in my review that I was seriously tempted to grab a pencil and go back to uni habits of annotating the book - something I haven't done in years. I don't know much about The Tenant of Wildfell Hall, because every time I try to read up on its' background I get some kind of epic spoiler on what will happen in the rest of the book,  except that when it was published (in 1848), it became an instant success, but that many people disagreed with the subject matter, which was quite a bit ahead of its' time. I am only just getting into the heart of that subject matter at the moment I think, and I can't wait to find out what actually will happen. Helen Huntingdon (Mrs Graham's actual name) is just beginning to discover the kind of person her husband Arthur is, and their relationship is already difficult. I love it so far because I can totally buy it - she loves him because of his energy, because he is wild and unpredictable and exciting, and she still believes that she can change him. I think that there are a lot of people in relationships, even today, who know what it is to have the 'oh but he could be so much better and I'm sure he'll change because he loves me' thing going on. I know I have in the past (although thankfully long before I met the hubby!).


Basically I have nothing but good things to say about this novel, and I really hope it stays that way! It's reminded me how much I love Victorian literature, and all the reasons why I was so desperate to participate in Allie's Victorian Celebration!


The book is also on my lists for the 2012 Mount TBR Challenge, A Classics Challenge and The Classics Club, so many birds are being killed with one stone, to use a horrible metaphor!
Posted by anarmchairbythesea at 15:12