Tomorrow, I will be a quarter of a century old..

Or as certain people prefer to call it, celebrating my silver life anniversary :-/ Rhys (who is horrendous at keeping secrets) has already given me some presents. These include:
Fables Volume 5:Mean Seasons by Bill Willingham
An awesome Phantom of the Opera silver bookmark
The soundtrack to The Muppets movie, which is beyond all kinds of amazing.

He also made me this: 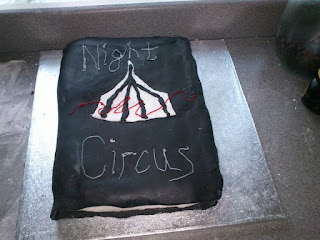 I did the lettering (badly, its been a while since I've used writing icing...) but in case you can't tell, it's a big rectangular chocolate cake, iced with white icing (for the middle of the book) and black icing (for the cover), and he has made a replica of the circus tent from the cover of my version of The Night Circus, which, in case you missed all the raving I've been doing about it, is like my favourite book of the last long time...

This is the best birthday cake I've had since I was around ten or so I think. I literally jumped up and down when he showed it to me.

I do have the day off tomorrow (because Wednesday, by happy coincidence, is my regular day off anyway), but I won't be seeing family until the weekend when I'm having an epically awesome cake party. Cross your fingers for good weather - we're planning a kind of Mad Hatters Tea Party type event. My sisters collect tea pots and we generally fill them with various concoctions of both alcoholic and non alcoholic varieties, and people are bringing different kinds of cake. If I get my act together I'm taking carrot cake and Mars Bar brownies.

But yes, tomorrow we have bookshop related plans.... Armed with a £20 note from my grandma (who never forgets!), we are hitting the charity shops along the coast and eventually plan to arrive in Whitstable for yet more outings to two of my favourite bookshops in the world, and also discovering lunch along the way. In the evening we're going to see Dark Shadows at our local cinema, which only charges us £5 and has £1 popcorn, so just general win :-)

Day off with my lovely hubby, cheap bookshops, guilt free money to spend on said books, amazing cake, and Johnny Depp. Now all I have to do is hope the sun shines...