I apparently am in the mood for writing, and I thought I should probably take the opportunity to post some at least vaguely book related things here :-) So I thought I'd do a 'books I've recently acquired' post, because I haven't done one of those for ages.


This week I was super proud of myself because I realised that I have actually gone a whole six months without buying anything from Amazon, thus making my boycott entirely successful so far, and it's not even been that painful. It's also been a hell of a lot better for my wallet, although I may reassess this opinion in a minute when I go through what I've acquired so far in June, which just to put it in perspective for myself (as I seem to have a problem whereby I always believe we're much further through a month than is actually the case),  we are only ten days into... So. Here goes: The top two are Tintin titles: The Seven Crystal Balls and The Calculus Affair, which we got for Rhys as he was feeling nostalgic and loved the movie. Also because we went into Harbour Books, which I'm sure I've raved about before, and all of their Tintin books were £2.99 brand new, so that was exciting! Also from Harbour Books I got Yoga for Pregnancy in the vain hope that it will make me be at least vaguely active and not just lie on the sofa every night after work moaning about how tired I am! 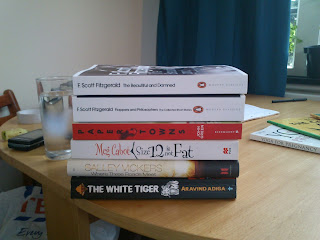 The Beautiful and Damned and Flappers and Philosophers by F. Scott Fitzgerald both came from the lovely Ellie, as an RAK and because she saw that I've been a bit down lately and wanted to cheer me up :-) She is seriously lovely, thanks again!

Paper Towns by John Green was also an RAK from Claire, and I'm really excited to read it! Thanks Claire!

The next three books are all from the other amazing bookshop in Whitstable, Oxford Street Books, which is a second hand bookshop that has recently expanded even more onto a second floor! I love the place, its like a cave of wonders, and the owners are so on top of their stock. Ask them for anything and they know if they have it and where it is in the shop. It's pretty impressive!


Size 12 is Not Fat by Meg Cabot - I've been eyeing this up for a while and it was 95p so I couldn't resist any longer!


Where Three Roads Meet by Salley Vickers is part of the Canongate Myth Series. It's a reworking of the Oedipus Myth and sounds great.


The White Tiger by Aravind Adiga - I kept seeing this in Waterstone's and finally succumbed. Again, 95p so not bad!


Also at car boot sales this morning I got a beautiful hardback copy of Charlotte's Web for 50p, A Portrait of the Artist as a Young Man by James Joyce, which I need to read for The Classics Club, and (ridiculously excited about this one!), a copy of Scarlett Thomas' Going Out. I already own it, but it's gone straight into my present drawer for when we get to Christmas!

Books aside, we've got a little windowsill garden going which we're really pleased with! We have four tomato plants, a strawberry plant, a sweet pepper plant and coriander and basil which we grew from seeds. The basil makes the room smell gorgeous and we have the first strawberry from our plant which we're going to eat later, just because we're so proud of ourselves. It doesn't even matter that it's one strawberry between two of us - we're both notoriously bad at gardening so we're really excited that we've managed to not kill things! Also, I have basil drying in my airing cupboard, which is lovely :-)