Some book - related babble, but mostly not...

So far in 2012 I've been really book - focused on the blog, and been reading a lot and such, which is obviously great, but in order to feel like An Armchair by the Sea is a proper representative of my interests like I want it to be, I thought I'd write a quick little post about some of the other things going on around these parts...

Some of you will have read about how I never ever finish anything I start, and obviously my first Blogoversary recently was a big boost in that direction, but I have another project which is along the same vein of finishing projects nobody ever thought I would. Last year, I learned to knit. For a year I just knitted - I decided early on that I couldn't teach myself to purl from the book I was using (Stitch n Bitch by Debbie Stoller), so I resigned myself to making purely scarves until I started getting left with all these random little bits of wool so I started to think wouldn't it be cool to use them all up making a patchwork blanket, and so that's what I've been doing. The other week, my mental block towards purling finally cleared so I'm moving on to some more advanced projects really soon hopefully, but yesterday I finally sewed together the first half of my blanket and I feel really proud of myself so I wanted to show you guys a picture! 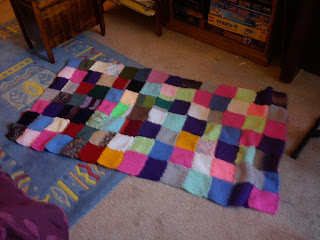 The colours are entirely random, but I love it, and it gives me something to do with my hands when I'm watching hours of mindless Greys Anatomy and Gossip Girl! When it's finished it will be at least twice as big as this, depending on if I make another two 7x7 blocks for it or four... For those of you who are not at all craft minded, feel free to not read the knitting posts, but I would like to post a bit more about my craft activities on the blog. There aren't usually a lot of them, but it would be cool to keep track of the big achievements!

The other thing I've been gradually easing myself back into since Christmas is the acquisition of new music. As a teenager music was my obsession (along with books, obviously!), and a lot of my time was spent listening to music, talking about music, and discovering new music. Lately I'd kind of got into the habit of listening to the same old stuff over and over. I love jazz and blues - Ella Fitzgerald is a big favourite of mine, and for Christmas my husband got me Hugh Laurie's album, which is surprisingly great. I'd forgotten how it is to listen to an album and immediately find a song that you just want to listen to over and over again. The last album I bought before this was The Red Hot Chili Peppers' By the Way, so it has definitely been tooooo long! While obsessing over Laurie's version of Hallelujah I Love Her So (which I orginially heard him doing as a duet with Jamie Cullum - excellent!), I discovered that I already have a version of the song by Ray Charles, which led to much more listening to Ray Charles. Basically, I've spent a few evenings browsing around HMV lately, and I am remembering how great finding new music is! :-) Anybody got any music in this sort of genre (I do have very broad tastes outside of jazz!) they think I should listen to? I'm always up for suggestions!!
Anyway, that's my rambling over for now, I just felt like I needed to get these non book related things out of my system. Now I'm going to go back to ruining my February reading plans with The Year of the Flood. It's not on my list, and has made me want to do loads of Margaret Atwood re-reading!!