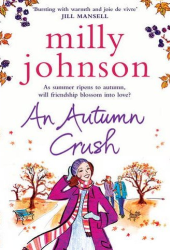 I got An Autumn Crush in the post the day I came back from honeymoon, and it was very fitting. It helped me to keep the happy, buzzy, I just got married feeling through my first few days back at work. The basic premise of the book is;

Juliet Miller is recently divorced and looking for a flatmate to help her out with the mortgage. After meeting several unsuitable people she is about to give up, when Floz appears. Obviously the perfect candidate, Floz is just what Juliet has been looking for, but not so her for twin brother, Guy. Although he is instantly smitten with Floz, unfortunate circumstances conspire to make her think he hates her, and vice versa. It is then up to Guy to turn her feelings around, while his best friend Steve has been in love with Juliet for years, and may finally be able to get what he wants...

It sounds, basically, like what it is: a bit of a girlie romp, similar to the likes of Jill Mansell, Katie Fforde, and Jane Green (all of whom I love). For me, it definitely falls into the ‘guilty pleasures’ category – the kind of book I’m likely to read with a bar of chocolate and some wine. One of the things that I liked most about the book was that although it played of a fairly typical – for – the –genre cast of characters (a girl and her brother, his best friend, her best friends...), there were little twists which kept them from being typical characters. For instance, Juliet is not your typical, starry –eyed girl with an ambition. During the course of the novel unexpected things happen to her, and she deals with them, and I liked that about her. She does the absolute bare minimum of sitting around moping and feeling sorry for herself, which there is often a lot of in this kind of novel. Floz is secretly living through heartbreak, as she reconnects with an old internet based flame, who is apparently dying from cancer. Instead of lying around the house weeping and wailing about it, she just deals with it and moves on, as she does with the tragedy that occurs during her earlier life, which Johnson unravels very neatly throughout the story.
The ending was gigantically predictable, but to be honest, I didn’t mind. An Autumn Crush is the kind of book you read because it is about people overcoming the problems in their lives and living happily ever after. It would have been a huge disappointment if it hadn’t ended the way that I thought it would. I finished it with a smile on my face, and at the moment smiles are limited around here, so it was much appreciated.
Although I liked the twists in the plot and the ending, I did feel that the characters were occasionally a little underdeveloped, and that some of their actions felt a little contrived. The Floz and Guy storyline played out very nicely and very naturally, but Juliet’s hatred of Steve throughout the first part of the novel never felt natural to me. I felt like it was being overplayed and put on to give the shock factor when she finally gives in to him and realises that she loves him, and I didn’t like it.
Overall, however, although the book did have its flaws, it is one of the better examples of (dare I say it?) chick lit that I’ve read in a long time, and I would thoroughly recommend it to anyone who wants something light and fun to read that will leave you smiling.
Apologies for the shortness of this review, I will eventually get back to the full length ones I promise!
Posted by anarmchairbythesea at 19:11