Today was a day which pretty much sucked epically. I mean, it had some really great moments (a lot, actually) but at the end of it my overall impression was of losing my temper and children misbehaving. I hate days like this - no matter how much I reassure myself that I wasn't as awful as I think I was it still feels like I've failed, however somewhere in the middle of a long debate about how long one actually needs to be on the potty for when doing nothing (45 mins is apparently totally necessary) I heard the postman arrive and deliver something which sounded distinctly parcel shaped. This was my mini Ninja Book Swap parcel and it pretty much saved the day. It also got me thinking about the swap in general. 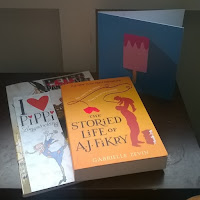 You see we have a cycle, the swap and I. When we're in the throes of a swap and I'm spending a lot of time on twitter talking to people about it and via email trying to sort stuff out and it's generally taking over many of my waking hours I get a bit stressed by it. During the February swap this year there were a lot of postal issues, none of which were the fault of the people taking part, but all of which caused stress for various reasons to various people. Because the swap is such a joy bringer I tend to get really upset for people when their parcel is delayed or hasn't turned up and after February we had decided to drop the summer swap this year and give ourselves some time to recharge before Halloween. Then I did what I always do and I started missing the swap. I missed talking to people about it, missed the organisation, missed buying gifts and making a parcel and getting to know new people. In short, I missed all the things that stress me about it when I'm doing it! And so I decided to run a mini Ninja Swap and everything I love about the swap came flooding back to me.

I love the Ninja Book Swap. The entire premise  of creating a thoughtful parcel of books, gifts someone will like and a note and actually connecting with people you only know online or hadn't known at all before is just something I feel so positive about. No matter the stress when something isn't going to plan I know that in the end we are doing something good here. During the Meet the Ninjas project I launched to fill the intended gap between February and September this year I've heard people's testimonies of how the swap has affected them and I love that I helped that to happen. Over six full swaps so far we've only had three people try to take advantage of us, and while this may be inviting that to happen more (I really hope not) it gives me such hope to know that in a world of awfulness there really are this many amazing people who will sign up to spend their hard earned money on a beautiful parcel to send to a stranger to make their day a little bit better.

The first swap Hanna and I ever ran I think we had ten participants, at least half of whom were bloggers we already knew and had somewhat bullied into playing along. Since then we've had lovely Kayleigh take part in every single swap (besides this last mini one) and I think Ellie as well, although she may have joined us for the first Halloween swap. My memory is hazy. We've also accumulated a core of people whose names I love to see on the sign up sheet. It's fantastic with an event like this to have a body of people you know you don't have to worry about. They know what they're doing, their parcels are always incredible and they're just generally a pretty awesome bunch of people. 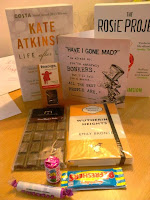 In light of the reason behind this post, I wanted to take a moment to note all the other swap parcels that have arrived fortuitously and helped improve days. Firstly I  have to thank Charlotte for sending me an incredible first ever swap parcel, which probably played a big part in my desire to keep the swap going! The third swap (February 2014) I signed up for two parcels, both of which were amazing. The first one from Sheli arrived just as I had got home from being out in a thunderstorm, for which I had been under dressed and was literally dripping and shivering as the postman rang the doorbell. As I opened it there was a large amount of shrieking and jumping up and down. Lovehearts and chocolate in a thunderstorm is just meant to be. 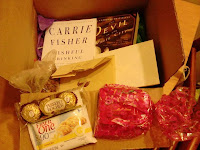 My second parcel from that swap actually formed the beginning of a beautiful (pen)friendship. Nahree sent me this parcel which I was so amazed by that I updated Rhys during every stage of opening it, like 'oh my good it's all wrapped in different coloured tissue'... 'oh my god she's drawn little clues on each gift'... 'Rhys! Rhys! She's written me such a sweet letter'... 'She sent TEA!'. The last one got a response - he's a big tea drinker, my husband, but seriously this parcel was fantastic just because of the effort and thought that had gone into it. A little while later we started writing letters to each other and we've been penpals for about a year now. 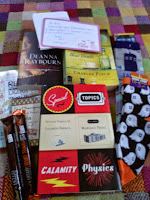 The other parcel I got that fits this category was from Jess of Literary,etc. It was for the Halloween swap last year and I was still struggling with the concept of being a mother of two and was generally overwhelmed and then this parcel turned up all the way from the U.S.A (god knows how much it must have cost her to post it!) and made me happy for the rest of the day.

Every single parcel I've ever got for a Ninja Swap, and I think there have been eleven so far (I sign up to send and receive two for most of the swaps now) has been incredible and amazing regardless of how many books and gifts it has contained. It really isn't about that for me. I will list the books I've got from Ninja Swaps at the end of this post and you will see that it is an awesome list, but it's actually not even the most exciting thing about getting a swap parcel. The most exciting thing for me is the person who's put the parcel together for me. I particularly love it when I get a little note detailing the reasoning behind each gift, as with Nahree's and Jess's parcels above, but even if not it's always so heartwarming when you're opening a parcel that a stranger has spent their time putting together and making beautiful for you. I also really love seeing people's excitement on social media when they get their parcels, and reading their posts about their swap experiences. Literally every time, no matter how stressed I've been in my personal life or whatever by the end of the swap I've felt amazing just seeing how much happiness it's brought.

Every single Ninja Swapper who's done the swap properly makes my day better. Long may it continue.

Special mentions for a few people who help with their awesomeness (because I'm never likely to win a major award): Hanna (obviously), Esther and Miriam, Rhys, Emma, Sarah, Nahree, Kayleigh, Ellie, Ellie, Laura, Katie, Debbie, Kristen and many many other people - the list would pretty much go on forever.

The next swap will be September/October. To find out more information check out our blog or to be added to the list for a reminder email when sign up opens email ninjabookswap@gmail.com. Alternatively follow us on twitter @NinjaBookSwap, where I've pretty much amalgamated the swap account and my personal one and talk about a bit of everything.
Posted by anarmchairbythesea at 21:42