I know that a lot of you reading this will have had a similar reaction to the news of Terry Pratchett's death on Thursday: shock, the hope that it was all a cruel internet hoax, followed by sadness and even tears as we mourn the death of this incredible author who was a formative experience in many of our reading.

It sounds silly to cry over the passing of someone I had never met in person - a fact which I will forever regret because I had several chances but for various reasons just never made it happen - but if it weren't for Terry Pratchett I wouldn't read fantasy at all, I definitely wouldn't have discovered Neil Gaiman at such a young age and possibly not at all, and many members of my family would still think reading was rubbish. My family collectively mourned his loss, as did many around the blogosphere. 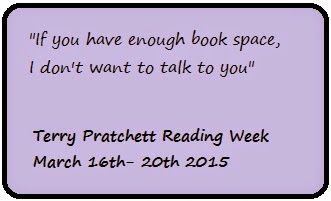 To celebrate his amazing legacy I wanted to organise a readathon. Initially I thought a weekend would be good, but he's written so much and there are so many possibilities for discussion that then I thought a week would be better. Therefore, Terry Pratchett reading week will now run from this Monday 16th March until Friday 20th. You can read whatever you like and you don't have to post daily, although I will be and I will post daily link ups here in case you feel like posting daily. You can post about what you're reading, whether you're rereading or coming to it for the first time, or you can post about your Pratchett related experiences or really anything Pratchett related that you want. If you're a first timer please join us! If you don't know where to start, just ask, I'm sure suggestions will be forthcoming!

You don't have to have a blog to take part - you can talk about it on twitter, tumblr, goodreads or wherever you talk about books, even just here, in the comments. I'm starting with Eric because I've somehow never read it. Who's with me?