Dear Blogland, I Miss You

Since Benjamin was born I feel like I've been kind of absent from the blogging world. I know that I've managed to keep up ok with the blog, to be honest, I've kept up a lot better than I expected to, but I just feel that, especially in recent weeks, I've not really been all there while writing my posts and I feel like the blog is suffering a little for it. Like it's not been as 'me' as usual. I don't feel guilty about it - this blog has never and will never be a source of guilt or of pressure for me, but it is a place to vent, to talk, to submerge myself in the things that I love and I feel sad that I've not been doing that as much recently.

I think the problem is that since I've been at home with the baby I'm obviously not working and so my life is kind of empty but also really full at the same time. It's really difficult to explain. Obviously it's full of mum stuff and spending time with my little (5 months old last week!) boy who is just awesome and it's so great to spend time with him despite how challenging it sometimes is, but also I tend to jump from thing to thing, so although I'm not working I am doing the following:


Anyway, so the major thing is that I miss being able to immerse myself in the blogging community. I really do miss all you guys - I hate the fact that I always have to comment on posts from my stupid phone while trying to steer the pram one handed, and that half the time I get distracted half way through and never actually send the comment. I also hate that I'm so out of the loop with twitter at the moment - I miss chatting with people and I feel like I always come in on the middle of conversations and/or jump into the middle of other people's conversations! So just to clarify, this is basically a post whining about how my posts are a bit crap :-) Also, I so love being a mum, I guess it's just taking some adjustment!! Plus I wanted you guys to know that although I'm kind of an absentee, I miss you all loads!! Tell me what's been going on with you :-) Also,as you've not had a photo in a while, here's one of Benji in his pj's and shoes, trying to eat his blanket in the car. 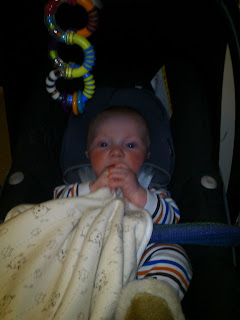