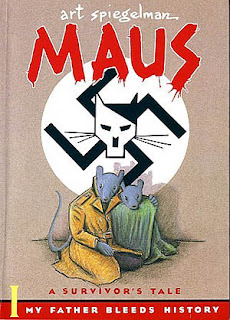 When I was at university, living in a flat with some friends, somebody gave us a video player (remember video players? I feel so old). Anyway, my flatmate and I promptly went round all the charity shops collecting videos for 20p each. As part of my obsession with following some kind of list of films you must watch before whatever, I got a copy of Schindler's List. I really wanted to watch it. I still do. It sat on the shelf for three years, then the video player broke and we got rid of it. I could never quite muster up the courage to watch something that I just knew would make me cry. The reason I haven't read Maus until now is pretty much the same.

Maus is possibly the book I’ve waited the longest to read. As a teenager I was always very interested (I say interested, but it was more horrified than anything else I guess) in the holocaust. I just cannot fathom how something so horrendous could ever have been allowed to happen and I guess I always hoped that if I read enough about it, it would somehow become clear to me. I’m still reading, and I’m still no closer to answers.

For the unenlightened, Maus is the story of Art Spiegleman's father's experiences during the Second World War, first as a Polish prisoner of war, and later on in Auschwitz.  I’ve got quite a lot of experience of holocaust literature and for the most part I found Maus a lot easier going than a lot of it. I think that the graphic medium helped a lot, and the fact that the Jews are drawn as mice rather than as people definitely distances it a bit, but I did still have moments where it suddenly hit me that they were talking about people – hundreds of thousands of people – that these horrific things were happening to.

In tone it reminded me a lot of Alison Bechdel, especially Fun Home and I think that if it hadn’t flashed between past and present and been interspersed with Spiegelman and his father in the present and their relationship, it would have been too heavy to take. As it was, I think it was (and is) important to read and probably should be somewhere on the National Curriculum.

Maus was originally published in two volumes, but the edition I read was The Complete Maus. The first volume deals with Vladek’s experiences as a prisoner of war and focuses quite strongly on Spiegelman’s difficult relationship with his father, and his father’s difficult relationship with his second wife, Mala. The second begins with Art after his father’s death and then flashes back to his time in Auschwitz.

I find it really difficult to write about the experience of reading Maus, because it feels like anything that I say would come out sounding kind of petty next to the horror of the experiences depicted in it, but I liked it because running through it was the importance of stories. Vladek telling his son about his experience helped to bring them closer and also helped Art to understand a lot about why his father was the way that he was. I like this as a message – stories promote understanding. Listening creates togetherness. It’s pretty good, as messages go. Also, and obviously, it leaves you with the thought that the holocaust was a horror beyond words and it is so important to remember it in order to prevent such atrocities from ever happening again.

Maus wasn't an enjoyable reading experience so much but an absorbing one, definitely. One of the things I love most about the Graphic Novel Challenge is that it really pushes me to look outside of my usual comfort zone and motivates me to read things I've been thinking about for a while. So there we go. Not cheerful, as reading matter goes, but definitely important.
Posted by anarmchairbythesea at 20:27