Review:- The Taste of Sorrow by Jude Morgan

I talked a little while ago about how I went to Haworth and saw the Bronte Parsonage and how totally in love with all things Bronte I am at the moment, especially after reading The Tenant of Wildfell Hall, so when the lovely people at Headline offered to send me a copy of The Taste of Sorrow, a novel about the Bronte family, I couldn't resist! I know lots of people will probably be familiar with the story of the Brontes and how incredibly sad it is;  pretty much everybody dies, and I knew this going in, but it was still a little overwhelming in places. I was reading it while we were away on holiday and had to stop at one point because I was getting too emotional. Do bear in mind that I am currently pregnant and incredibly (I mean ridiculously) emotional, but still. It's not a happy story. 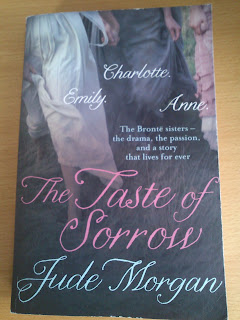 I am an awful, awful photographer

It is, however, very well told, and very interesting. Although there is no narrator as such it is primarily told from Charlotte's point of view, as she outlived all of her siblings, and although it is marketed as fiction, it is as informative as reading a straight biography. It's likely that I will retain more information from reading The Taste of Sorrow than I would if I'd gone to the non-fiction section and pulled out a Bronte biography, as the novel has a sense of drama and character which is not usually present in non-fiction. Also, apparently non-fiction takes me about two months to finish, regardless of how good it is, whereas this took me less than a week. Jude Morgan does a wonderful job capturing the individuality of each of the Brontes: Emily's self-contained poise, Anne's obedience and attention to her duty, and Charlotte's wildness and longings for independence. And then there's Branwell. People mention Branwell in passing, usually, or sometimes in an 'oh it's so sad, he could have been the genius of the family if not for the drinking and the drugs' kind of way, and while there is some of this feeling about it, his decline in the novel is pretty much shown as a result of his own actions. The girls are all very stoic and relentless. Branwell on the other hand, spends most of his time wallowing in what he perceives as his misfortune. It is very sad as in childhood he is undoubtedly the leader of the gang, and the inventor of their fictional world to which they all (especially Emily) return often well into adulthood. Having said that, though, I can totally see the appeal; he's a very romantic character, and in a lot of ways there's quite a bit of the Heathcliffe about him. Laura (who I apparently can no longer write a post without referencing) said that she thinks she has the hots for him, and I get it. He's a very compelling character. I think she should definitely read this book...

I knew that the school from Jane Eyre was based on real experiences, but I didn't realise how real. Two of Charlotte's sisters, Maria and Elizabeth both died from tuberculosis while attending Cowan Bridge school, where the standards of the food provided to the boarders among other things, was the cause of an outbreak of typhoid. After finishing this it just made me realise how much I need to read the rest of the Bronte books, as I could see parts of their lives which had been used in their fiction even in the limited amounts that I have read. I loved that despite the slightly despairing feeling that runs through the novel, none of the girls ever give up on each other or themselves, and I particularly loved how resilient Anne was. I've just recently discovered Anne, and as some of you will know I entirely fell in love with The Tenant of Wildfell Hall. Although I loved Jane Eyre and Wuthering Heights, for me Tenant is just kind of kick-ass in a way that neither of the above quite are, and in this novel Anne was pretty kick-ass too.

It's taken me SO LONG to write this review (we're talking about a month here) purely because I found it so engrossing, as I find the Bronte's themselves engrossing, and I didn't want to just go off on a totally fangirlish rant about how great they are. Unfortunately I don't think there's any way to avoid them. Basically, I'm a little bit in love with this book, with all of them, and with Yorkshire in general.
Posted by anarmchairbythesea at 16:00