For a while, I've wondered why it is that Noel Streatfeild writes so much about 'shoes', and about children in the showbusiness and entertainment worlds, and then I discovered that she was an actress herself, before becoming a writer. For me, the worlds conjured up by her books were always hugely vivid, and on re-reading them, I was not disappointed. As an adult (supposedly, anyway!) reading Streatfeild's work is as delicious and comforting as it was when I was eight, and I think that this is a product of her consistency and attention to detail, coupled with her ability to create characters who resonate with her readers. 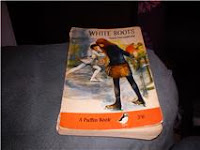 My copy of 'White Boots' is absolutely ancient! It may well have belonged to my mother in her youth, and I certainly remember first having this copy read to me as a bedtime story, many years ago. In comparison, the copy of 'Dancing Shoes that I have is one of the re-released ones, with the very girly pink covers, which makes it look like an Angelina Ballerina book! Subject-wise, though, the books are very similar, probably unsurprisingly, given their respective publication dates of 1951 and 1957.

'White Boots' is about Hilary Johnson, a girl from a poor family, whose doctor prescribes that she go skating as a way to build up her strength after a long illness. At the rink, she meets Lalla Moore, a girl whose father was a skating world champion, and since his death, her aunt has convinced her, and everyone around her, that she will follow in his footsteps. The book follows the story of their friendship, and not only the differences between being rich and poor, but the advantages money can bring as well as highlighting the emptiness it can cause in the life of an only child.

'Dancing Shoes' also highlights social inequality, as well as sharing the sort of morals present in lots of Streatfeild's books; that people who are nice usually get good things happening to them. It has similarites to 'Ballet Shoes', which is a book I love!
It is about orphaned Rachel Lennox, and her adopted sister Hilary. After their mother's death, they are brought to live with their aunt and uncle, and spoiled cousin, Dulcie. Simply put, Dulcie is the star of her mother's dancing school, and really doesn't like it when Hilary turns out to be as good as her. Again, this is basically the story of the relationship between Rachel and Hilary, and about people getting their just deserts.
Streatfeild has a way of describing things exactly as you can imagine a child of the time might, and this, as well as the wish-fulfillment quality of her storylines, where her characters always end up getting the thing they have worked and hoped for, is what makes me love her books. I could keep reading them forever, but I feel that I need to stretch my brain a bit after three of her books in a row, so I'll take a break for now, but there's a pile of her books in the corner which will be calling out to me before long!!