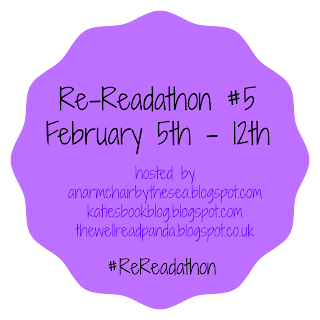 My re-reading so far this week has been really reflective of the state of my brain; disjointed! I'm going through a phase of life where I think after this week I'm probably going to throw in the towel for any kind of reading commitments besides Discworldathon (which I'm doing a terrible job of hosting, and I apologise) and Ninja Book Box related things and just read whatever the hell I want for the rest of the year. However it remains that I love and adore the premise of Re-Readathon and I have been doing some re-reading this week, amongst the mass email sending for London Bookshop Crawl, sorting things for goody bags and organising the February book box!

Day 1,2 and 3
Books read from: Pride & Prejudice, Animal, Vegetable, Miracle by Barbara Kingsolver and The Colour of Magic by Terry Pratchett
Pages read: 90

So that's pathetic, but on the plus side I am really enjoying Pride and Prejudice. Mr. Bennet particularly is hilarious.

Today's mini challenge is hosted by Gee. She asks us to reflect on a different perspective a re-read has given us, for better or worse. Honestly I don't have an answer for this! I'm not saying I've reacted in exactly the same way every time I've re-read a book, but similarly enough that there aren't any particular books that spring to mind when I think about this question! The closest I can get is my response to Sylvia Plath.

When we studies Plath at school I really really hated her poetry. It struck me as massively self indulgent, whiny and narcissistic. Honestly, it still pisses me off that she'd compare her relationship with her father to Hitler and the Jews. For goodness sake. But when I re-read a lot of it at University I eventually began to realise that although all my former opinions remain (in my head at least) true, I do have to give her credit for being pretty great with words.

Here's the poem that changed my mind (from allpoetry.com)

The prince leans to the girl in scarlet heels,Her green eyes slant, hair flaring in a fanOf silver as the rondo slows; now reelsBegin on tilted violins to spanThe whole revolving tall glass palace hallWhere guests slide gliding into light like wine;Rose candles flicker on the lilac wallReflecting in a million flagons' shine,And glided couples all in whirling tranceFollow holiday revel begun long since,Until near twelve the strange girl all at onceGuilt-stricken halts, pales, clings to the princeAs amid the hectic music and cocktail talkShe hears the caustic ticking of the clock.

Weird because it's definitely not technically her best, but I do still really like it.

Head over to Gee's blog and link up your entries for today's challenge, and don't forget to let us know how your re-reading is going in the comments or using #rereadathon!
Posted by anarmchairbythesea at 08:53