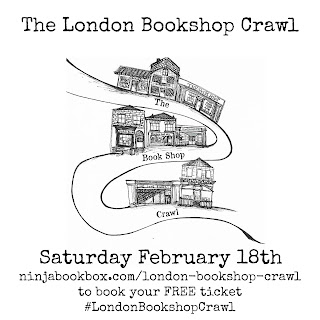 London Bookshop Crawl is happening again and its popularity has exploded, as mentioned in my previous post. Because of this there seems to be some confusion about details for the day and this would appear to be the easiest way to clear those up!

Last year, on the first London Bookshop Crawl, there were less than 30 of us and we went around a route created by myself and chatted and had a lovely day. This year the intention is to do the same, but because of the interest we've had it's going to have to work a little differently.

I pretty much organise this event on my own, but thanks to help from some lovely past crawlers we are running four groups this year, each of a similar size to last year (so 25-30 per group), because it's very important to me that people have the chance to connect with each other and meet new book lovers without the day becoming totally overwhelming. I know some people deal well with huge groups but I don't and I know a lot of others don't either, so the groups are staying small, for this year at least. Small groups are also essential for some of the smaller bookshops that we'll be visiting on the day, as large numbers would overwhelm them. These four groups will be visiting 7 bookshops over the course of the day - the bookshops are pretty much the same for each group but the itinerary is different, allowing us to stagger the arrival of groups at smaller shops and helping them to deal with the crazed book lovers descending on them! People who sent a message asking to be in the guided groups before the spaces were gone have been allocated a group and we'll be sending more information to them this week.

However because we didn't want anyone to miss out on the day, we have extended the crawl throughout Greater London and are putting together a huge list of bookshops who'll be taking part and providing special offers and discounts for bookshop crawlers. We'll be circulating this list along with some suggested routes and a printable bookshop crawl ID card to everyone who has a free ticket via Eventbrite so anyone who wants to will be able to take part on the day. We'd also love everyone to use #LondonBookshopCrawl to share where they go and what they buy and even to meet up with other crawlers if that's something they're interested in doing.

The only difference between being in a guided group and doing the tour alone is that people in guided groups will be following a set itinerary and meeting a few new people, but as of writing this post there are 400+ people with Eventbrite tickets who aren't in guided groups, so I'd say the chances of you stumbling across another bookshop crawler during the day are quite high!

It's basically going to be a huge celebration of the excellence of bookish people and bookshops and we hope you'll join us, whether or not you got a place in a guided group (which, to be honest, are just a group of people walking around visiting bookshops anyway!).
Posted by anarmchairbythesea at 20:51