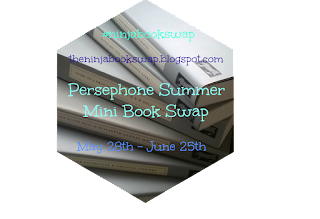 Hi guys, it's another Saturday but I haven't got a feature ready for Make Mine an Indie. As some of you may know, though, sign up is currently open for two mini book swaps, one of which is just buying each other books from your standard wishlist, but the other of which, for the first time ever, is publisher specific.

During the London Bookshop Crawl in February we visited Persephone Books and although it wasn't my first visit, it did massively inspire me to use this summer swap as a chance for people to develop their collections of Persephone's beautiful books (or to be introduced to them for the first time!). In case you don't know, Persephone specialise in publishing out of print or forgotten writers, mainly women, mainly from the between the wars period. All of their books are published with beautiful grey covers and gorgeous endpapers featuring designs from the year that the book was originally published.

For the Persephone specific swap participants must make a shortlist of four titles they'd most like to be gifted, and everyone so far has agreed that it's pretty difficult to narrow it down to four! In aid of this, here's my list of ten, some of which I've read and loved, some of which I own but haven't read yet, and some that I am lusting after! I hope you find it helpful, and wherever you are you can sign up for the book swap (either or both!) here.

1. They Were Sisters by Dorothy Whipple
I bought this after great recommendation from Lydia at Persephone Books during the Bookshop Crawl and I was not disappointed. See my review here for my thoughts on this beautiful, slightly sad novel about three sisters and the very different trajectories their lives take.

2. Saplings by Noel Streatfeild
This was the first Persephone I ever read (although not the first I owned) during my year of reading Noel Streatfeild. It's great but a very weird read if you're familiar with Streatfield's other work, because she goes merrily along in her usual, child friendly style, and then suddenly starts talking about sex. It's a little disconcerting.

3. To Bed with Grand Music by Marganita Laski
I picked this out on my first ever trip to the bookshop with Katie back in 2015 based purely on the eye catching endpapers and was not disappointed. It's about Deborah, a discontented housewife, who moves to London while her husband is away during the war, leaving her child with the housekeeper in the country, and everything that happens after that.

4. The Making of a Marchioness by Frances Hodgson Burnett
You'll probably have heard of Frances Hodgson Burnett, the author of a little book called The Secret Garden (and also A Little Princess), but I'm excited to read another of her books, and one which was written for adults. I picked this up on the same trip as To Bed with Grand Music and it's compelling so far.

5. Miss Buncle's Book by D.E Stephenson
Another one I really want to read. Miss Buncle, an unmarried woman living in a small town, tries to supplement her income by writing a book about the town she lives in. It sounds really fun.

6. Few Eggs and No Oranges by Vere Hodgson
One of my favourite things about Persephone as a publisher is the diversity of their books, and this is a good example of that. This is the war diaries of Vere Hodgson, where she chronicles how her life changed during the Blitz and after. I'm really interested in second world war literature and this sounds fascinating to me.

7. William - An Englishman by Cicely Hamilton
This is the first book that Persephone published and at least four people have recommended it to me since the bookshop crawl. It's again a novel about war from the perspective of a normal couple and it sounds excellent.

8. The Blank Wall by Elisabeth Sanxay - Holding
This is a thriller, a genre I don't usually go for, but I found it in a charity shop a few years back and because it's Persephone I picked it up. It's about a woman whose husband is away fighting in the war, and who is implicated in the murder of her daughter's boyfriend. Sounds great!

9. It's Hard to Be Hip Over Thirty by Judith Viorst
Persephone also publish some of Viorst's other work, and this is poetry, just to continue showing the diversity of the books that they publish. Check out the link above for an example of her work!

10. Reuben Sachs by Amy Levy
A lot of people have put this on their wishlist for the swap so I was intrigued to find out about it. It was written partly as a reaction to George Eliot's Daniel Deronda and is about a couple in the Anglo-Jewish community in Bayswater who love each other, but her poverty would inhibit his political ambitions.

I hope I've done a good job of convincing those who didn't know of the wealth of subjects and genres covered by Persephone! If you've not signed up for the swap yet you really should, particularly if you're interested in reading more books by female authors. I've literally never heard anyone say a bad thing about a Persephone book, and I've never had a bad experience with one myself.

Once again, sign up for the Persephone swap or the Original Swap here until June 11th and check out the rest of Persephone's brilliant catalogue on their website.