This is a bit of a miscellaneous post, but there were several things I wanted to post about, so here you have it!

Firstly I want to thank everyone who took part in the Re-Readathon the past ten days. It was brilliant, and I have some giveaway winners to announce! Firstly the winner of the pile of books is Gemma, and the winner of the international giveaway is Lynn. I picked both of the winners via random.org, congratulations both!

This month I also received two parcels through my parcels of joy project (I sent several too - some chocolate peanut butter cookies, some peanut butter & jam pinwheels, some tea and a random little other parcel) and I wanted to post about them here because they were great. If you want to join in with the project, the requirements of which are just that you want me to send you sweets, baked goods, possible books and random gifts from time to time (you can send too if you want, but you don't have to) all the information is here.

The first parcel I received was from Margaret, who's been involved with the Ninja Book Swap for a while now but who I've never actually exchanged with, and I can confirm she makes a brilliant parcel!

Amazing #parcelsofjoy from Margaret!! Cannot wait to try the tea and everything else is amazing!!#happymail #snail mail #tea #tealovers #stationery
A photo posted by Bex Hughes (@armchairbythesea) on Mar 7, 2016 at 11:12pm PST


I got some lovely chocolate, amazingly delicious raspberry rooibos tea, a pocket sized notebook that I'm in love with, some sweets, some pencils and a lovely card. It really made my day!

The second parcel I got was from Jinger, who is also a Ninja Swapper. It was lovely and Easter themed and delicious and also contained a notebook and some rum brownie bites that were super yummy. 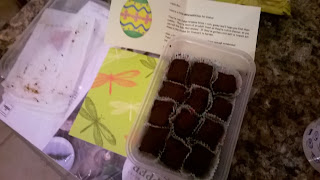 This month I also subscribed to my first (and their first) Fairyloot box. I discovered them when I asked people about UK based bookish subscription boxes, and as the theme of this month was Retelling I had to try it out! 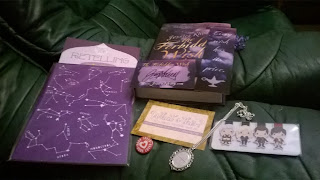 This parcel was pretty cool. The packaging was beautiful and I loved the way the box was branded with awesome stickers and a beautiful print out of what was in it. Once I opened the box and got through the huge amounts of purple padding I pulled out some gorgeous gifts - these awesome Throne of Glass magnetic bookmarks from Sticker Alley, whose stuff I've been lusting after for a while, and a brilliant constellations notebook from Newton and the Apple, who I'll definitely be checking out in the future! There was also a pretty Alice in Wonderland themed necklace and a cool little Book Lover badge, and a Shadowhunters inspired exclusive candle (which somehow missed the photo!), and then the main event, the book itself! Along with it there was a signed book plate, a bookmark and a secret content code that I have yet to check out. The book is The Forbidden Wish by Jessica Khoury, a retelling of Aladdin which is cool as it's probably one of the fairytales that I've read the least retellings of.

I really enjoyed this fun bookish parcel, and will be getting it again in the future! I'd highly recommend it if you're interested in discovering more in the YA fantasy genre.

This has been a random post, but I've been so readathon focused recently that it was necessary I think!

Do you get any bookish subscription boxes? Any recommendations? I want to try them all!