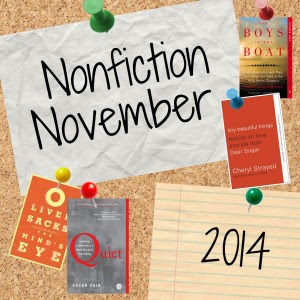 A couple of days ago I posted about my participation in Nonfiction November and because I'm obviously a crazy person, I then decided that despite not being quite done with the Halloween Ninja Book Swap yet, I'd quite like to organise a Nonfiction only swap on my own to tie in with the event. I tweeted about it and got quite a bit of response, and the lovely hosts of the event (Kim, Leslie, Rebecca and Katie) have since given the idea the thumbs up so here we are!

Those who have participated in Ninja swaps before, this is not a ninja swap. The idea for this swap is purely that you make a wishlist that's nonfiction only, then sign up by filling in the google form below, I will partner you up with somebody and pass along their email address. You will then email them to get their wishlist & postage details. Then you go buy them a book (or two if you're feeling rich/generous) and either post it to them (if you're shopping in a real life bookshop) or have it sent directly to them (if you're shopping online). Sound simple? Hopefully it will be!

My major thought for this was that I have so much nonfiction on my wishlist and I think generally it scares people off so I never actually get given any of it! Also it's only the first week of Nonfiction November and I've already added so many great titles to my list so it would be fantastic to spread the nonfiction love by gifting each other some great books :-) Come and join in! I'll give you until next Wednesday 12th November to sign up! Any questions feel free to ask in the comments or tweet me (@fairybookgirl or @NinjaBookSwap)