Books on my Beside Table #3 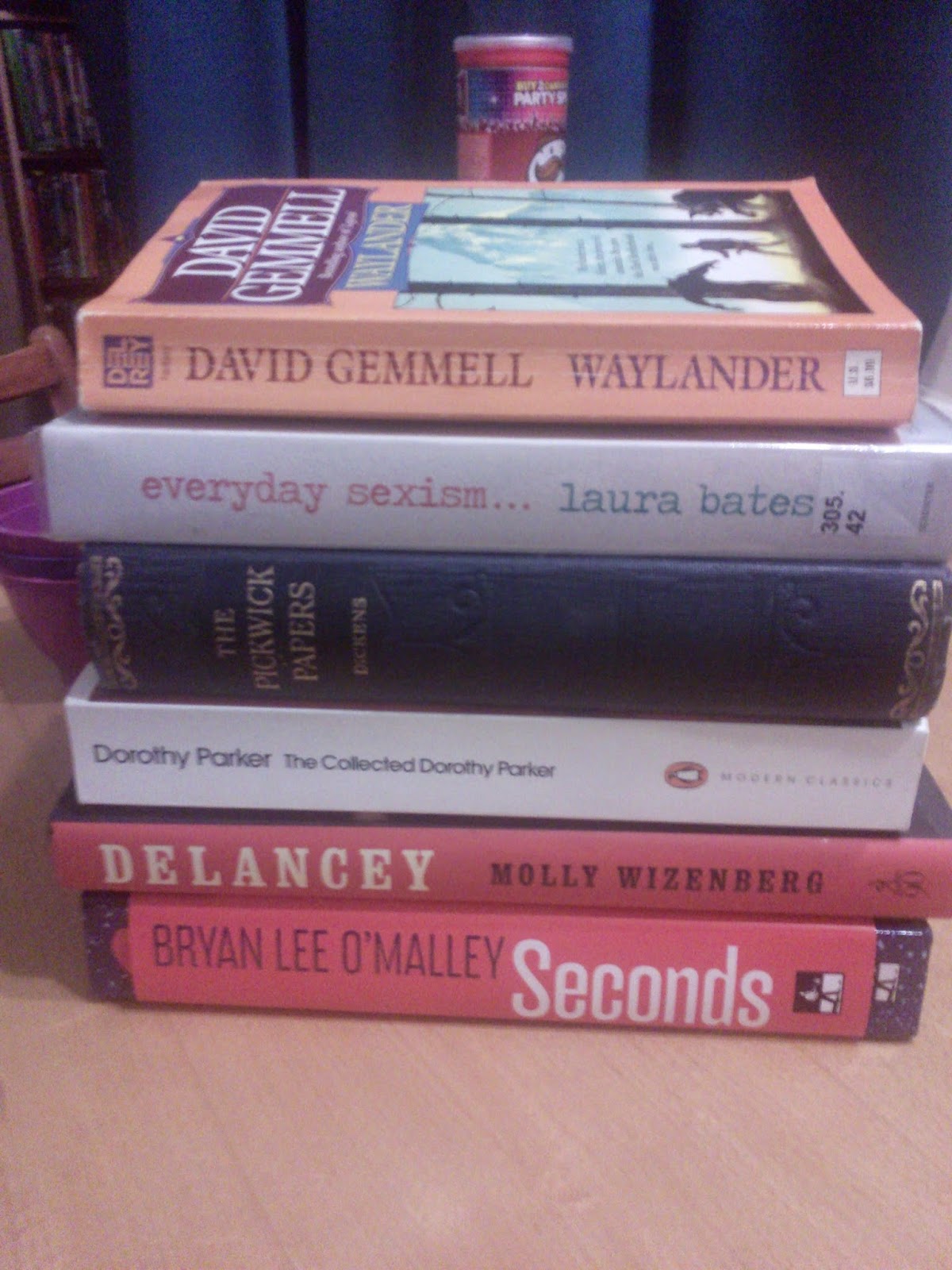 This is actually not my bedside table, but these are the books which have been hanging around that area lately. It's been far too long since I've done this, and since I stopped using Goodreads and still can't get on with an alternative system of cataloging what I've read I really need it to remember the stuff I've read which is less than fantastic, or to remember what was fantastic which I haven't got to reviewing yet!

Before we start, The Pickwick Papers I am not actually reading yet, but it's in the pile because it won the poll on what to read for #dickensindecember and it is loooonnnng so I'm trying to figure out how to readalong it in four or five weeks without us all going insane. There will be a sign up post going up in a week or two, join in, it will be really fun!

Quite a lot of diversity in the pile this week! Starting off with some epic fantasy in the form of a long overdue reread of David Gemmell's Waylander. As a teenager I seriously adored Gemmell and have read everything he ever wrote. I was heartbroken when he died and still can't read the final book in his Troy series without bawling my eyes out (it was finished by his wife and the ending just reads like she's saying goodbye to him and I can't handle it). When I asked facebook which of his books I should start my reread with, my friend Robb (hi Robb!) said "Start with the one about that guy who doesn't give a shit, is a bad ass but has a big heart and finds his conscience", which is funny because many (probably most) of his protagonists follow that format, but somehow they remain fantastic and worm their way into your heart. I'm only a few chapters into Waylander but I'm already remembering how much I love it.

Everyday Sexism is absolutely fantastic but it's taking me ages to read because it is so, so depressing. I promise even if you are a woman who has never been sexually assaulted in any way, you will read this and so many of the things she talked about will have happened to you and you will probably just have accepted it as normal behaviour. It literally makes my heart hurt and it makes me so angry but it's such an important book to read. Because of previously mentioned anger, the rest of the pile is specifically designed to calm me down...

The Complete Dorothy Parker was a recent impulse buy during my first child-free Waterstone's trip since Sam was born. Dorothy Parker was on the reading list for the Gilmore Girls Reading Challenge I participated in a couple of years ago, and I never see her anywhere so I've been sort of off and on looking for her since then, and I always have the problem when in Waterstone's of 'what do I really want to spend £9 on?', because a lot of what I want to read I know I can get in the library or everyone's currently reading it so in a couple of months the charity shops will be full and so it feels like a waste to buy a full price copy, but as I said Dorothy Parker turns up so infrequently that I felt I had to buy it really. It's all short stories, journalism and poetry and so far it's been really enjoyable.

Delancey by Molly Wizenberg is gorgeous and I've been reading it for ages and ages because it's part memoir, part cookbook and her writing is literally delicious. If you haven't read her blog, Orangette, yet, you really should.

And finally I just started Bryan Lee O'Malley's new graphic novel, Seconds, which I made my lovely sister and her lovely boyfriend get signed for Rhys' birthday when they went to see him. I've literally read a few pages so far but it's time for a graphic novel, so that will be good.

Also I'm reading The Great Gatsby with Ellie, but it keeps going walkabout. It's one of those books I keep putting down somewhere and can then never remember where somewhere is, but I will find it in the next couple of days and I will start reading it again...