The Book of Life by Deborah Harkness

A while back I reviewed the second book in this trilogy, Shadow of Night and was alerted by somebody on twitter (I forget who, sorry) that I'd been quoted in the 'praise for this novel' section of the paperback, which was ridiculously exciting. So a while passes and I'm sort of aware at the back of my mind that the third and final installment of the trilogy is due out, and then I have to go pick up a mysterious parcel from the post office. I haven't ordered anything, what could it be? It turned out to be a wax-sealed invitation to the pre-launch event for The Book of Life and a little bottle of wine (!!). Almost definitely the coolest book related post I've ever got! 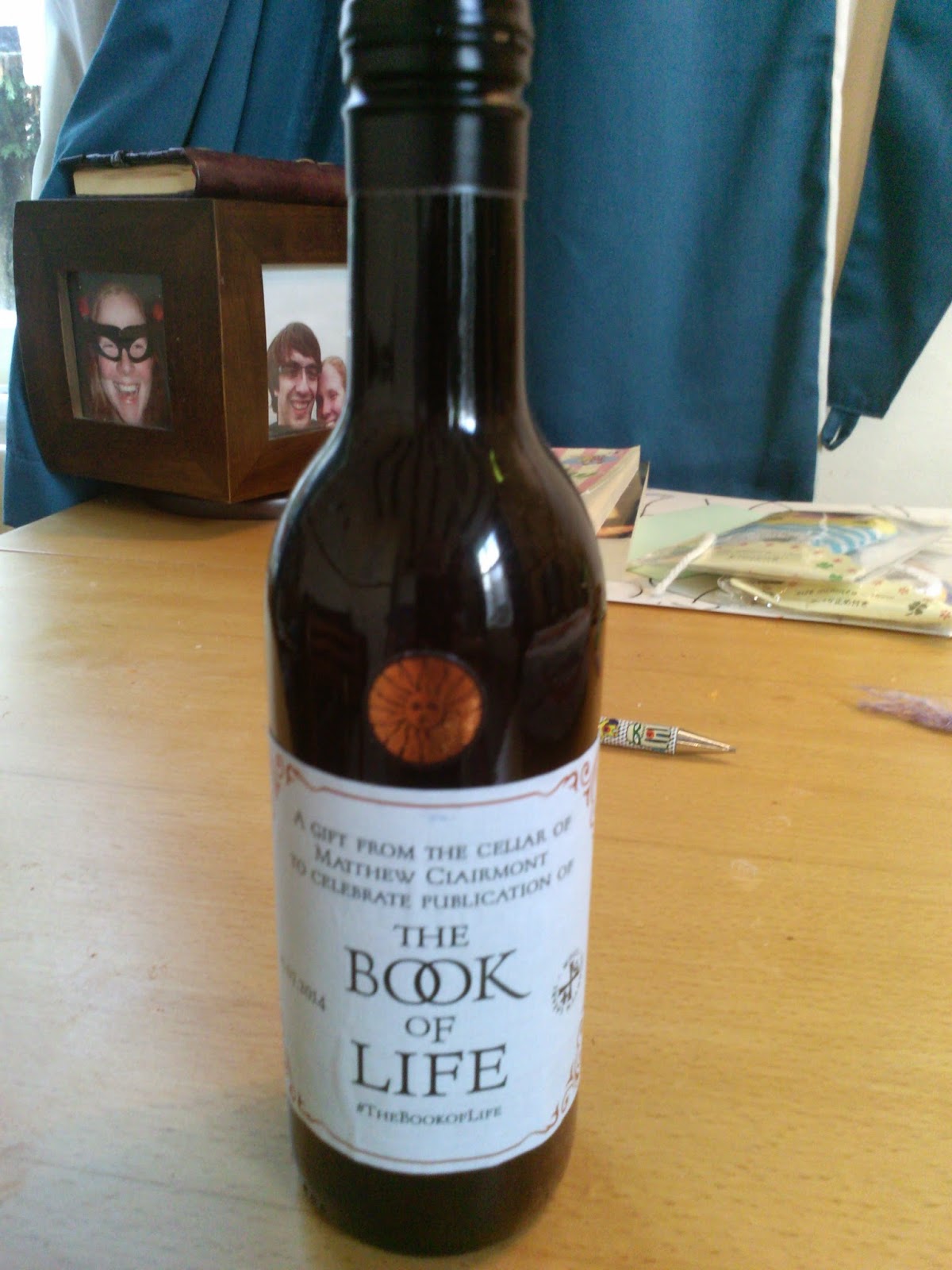 Because of having a baby, I wasn't able to attend the event and I emailed the publishers to let them know, and to cheekily ask if they would be willing to post me a copy of The Book of Life to review instead. I heard nothing more until a few weeks ago, a signed hardback copy of the book turned up on my doorstep. Seriously awesome.

So now I'll talk about the book, I just wanted to share the story of how it came into my possession, because it's a great story. 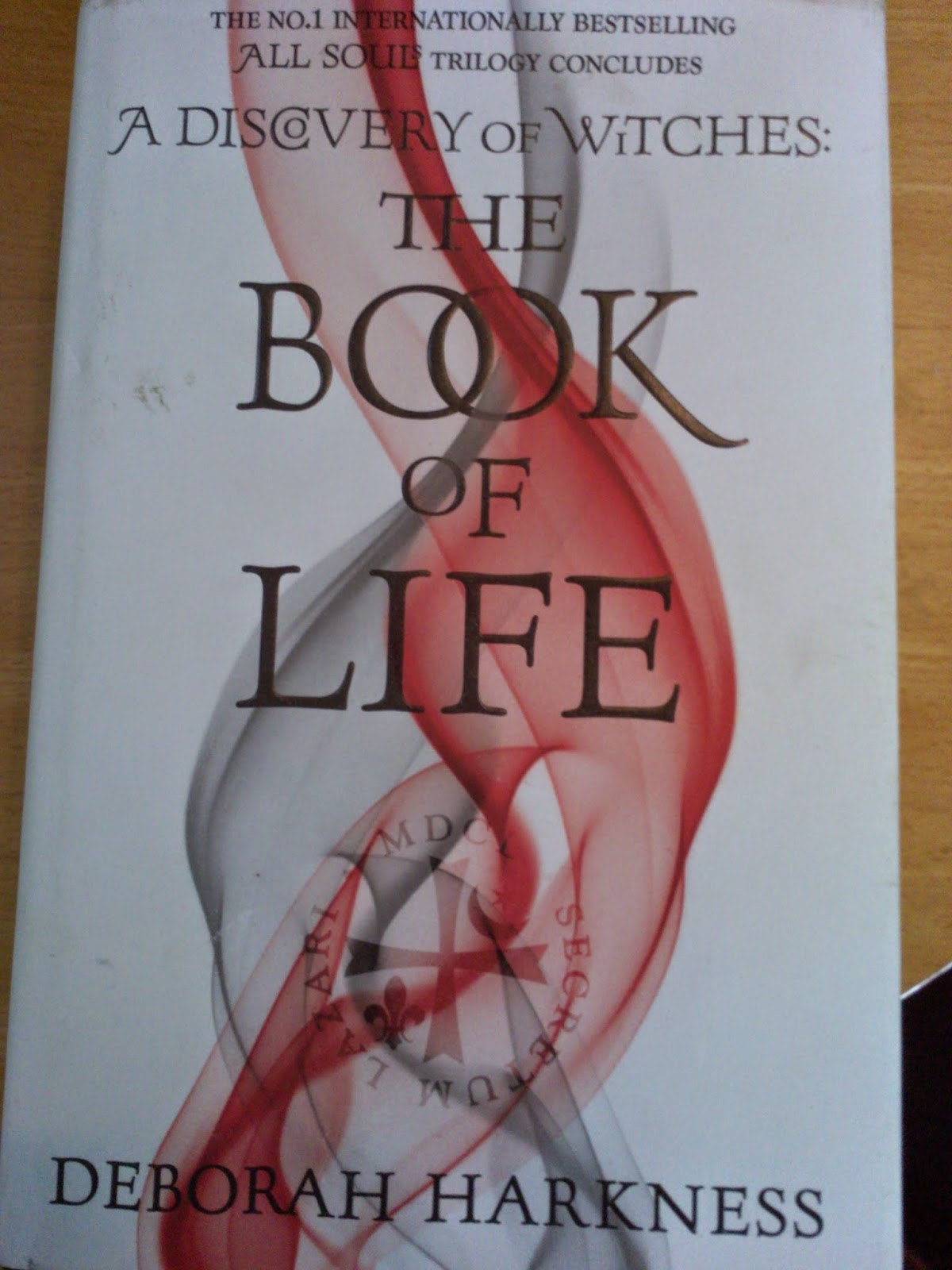 I've enjoyed the entire trilogy, but I think The Book of Life was probably my favourite. Having finished it I really want to go back and reread the other two because I know there's a lot that I don't remember, and I'm not sure how much I can talk about this without spoilering, which I really don't want to do...

For those who have yet to read these books, the trilogy (which starts with  A Discovery of Witches) centres around Diana Bishop, a professor at Yale University who, when the story begins, doesn't know she's a witch, and Matthew Clairmont, a vampire. Just before we start, no, he doesn't sparkle. Glad that's done with. By the time we get to The Book of Life, Diana and Matthew are married and Diana is pregnant with twins. They pretty much spend the trilogy trying to get their hands on a document called Ashmole 782, otherwise known as The Book of Life, which they think will explain the origins of witches, vampires and the third 'creature', daemons. In The Book of Life there is also a seriously creepy bad guy who they are trying to outrun.

I think I liked Shadow of Night a lot more than a lot of people did, but I enjoyed The Book of Life even more. There are a silly amount of characters in it, but I love that because you've got to know a lot of them so well by this point that it just feels like you're seeing old friends again, and the new (or newer, or returning characters in new forms) characters fit in pretty seamlessly to the plot. I've got to admit I also really like Diana and Matthew's love story - they are seriously obsessed with each other but it manages to not be creepy somehow and instead just seem like two people who are genuinely in love and intend to spend the rest of their lives together. They also constantly defend and rescue each other. It's not all Matthew saving Diana by any means, and The Book of Life pretty much centres around Diana realising her full power and how she has the strength to save her entire family if necessary. The parallels to Twilight will always be there, and it's difficult even for me to get away from them (Bella Swan has a baby, the baby drinks blood, Diana Bishop has babies, one of the babies prefers blood) but when Deborah Harkness writes these things I'm just like 'yep, fair enough', whereas in Twilight I'm like... *makes sceptical face*. Pretty much the big difference (aside from being better written, having better characters and a better storyline) is that Diana Bishop kicks ass, whereas Bella. Well.

So enough Twilight comparison. My favourite character in the whole series is Gallowglass. He kind of reminds me of the vampire version of Beast from Beauty and the Beast - all massive and scary looking but then actually just an absolute sweetheart. Love love love.

Once again I've written most of a review without actually telling you much about the plot line, but let's just say that everything that's been going on throughout the trilogy is nicely tied up here and that pretty much everything you're hoping will happen, does. Also although it's supposedly the final book, it kind of doesn't feel like it?

If you liked A Discovery of Witches but weren't such a fan of Shadow of Night I'd recommend giving The Book of Life a go, I'm pretty sure it'll be worth it.

The Book of Life was sent to me by the lovely publishers, Headline, for review.
Posted by anarmchairbythesea at 19:44