Birthday, Baby, and Other books

As you may have noticed, June was not only the month of the Ninja Book Swap, but also the month including my birthday and the day that I gave birth. When you have awesome friends and family who know how important books are to you, this equals a vast amount of incoming books, and because I really love writing posts full of pictures of books and lists, here's what's come into the house in the last month! My Ninja Book Swap haul I've already blogged about so as to stop you all from being entirely buried under my pile of books. You're welcome.

Ok, so firstly I got a couple of books for review this month, which I haven't been doing for a while but these both look awesome so I had to really. Firstly, Myriad sent me a copy of Alarm Girl by Hannah Vincent which sounds really awesome and it's pretty short so hopefully I'll be able to get through it fairly quickly! In a normal month that would have been the highlight, but then this morning this turned up on my doorstep: 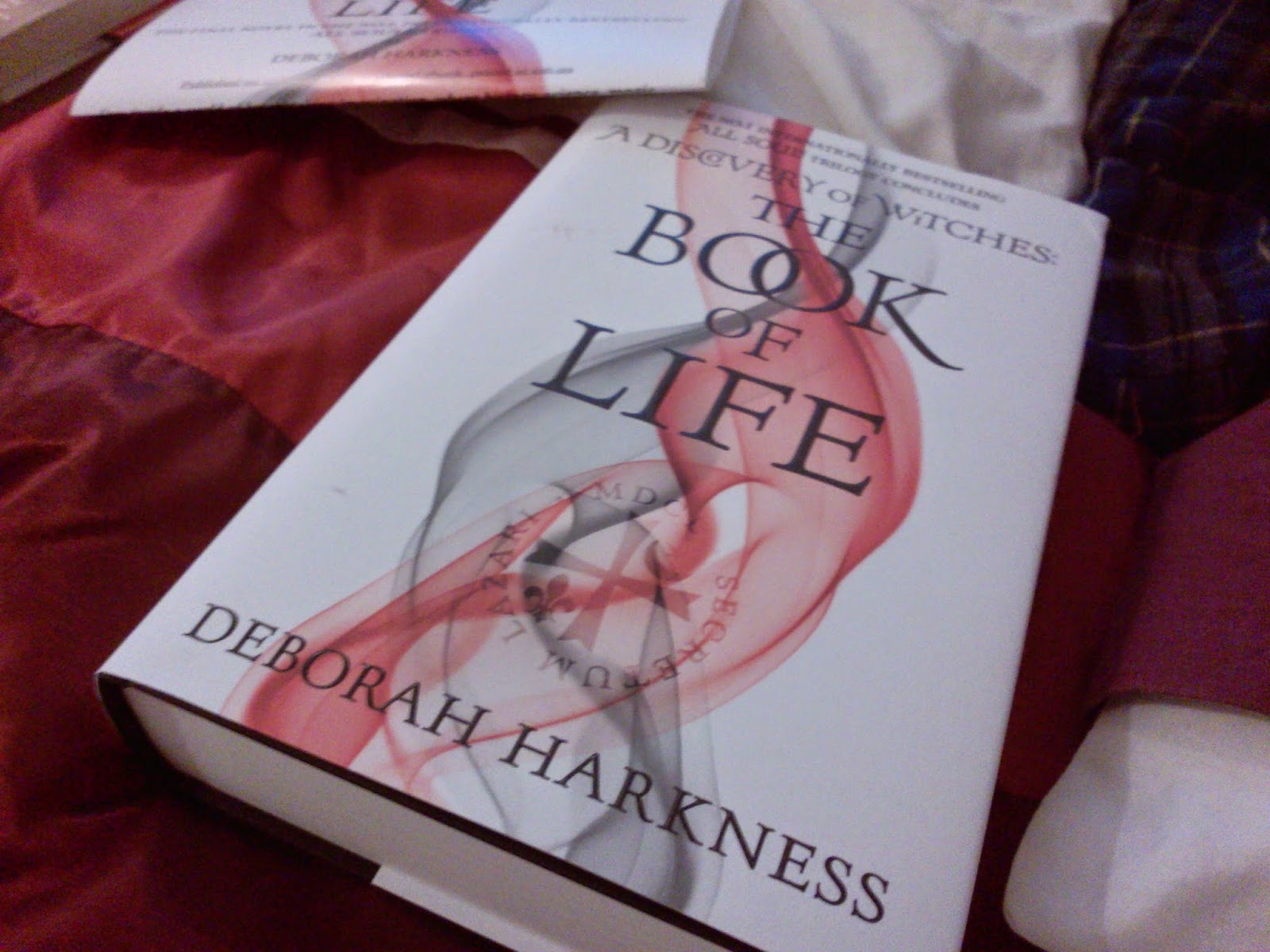 and it's signed! I was invited to the pre-publication event but couldn't go because of having just had a baby, so I'd contacted Headline to say that I wasn't going to be able to make it and then this turned up, which is exciting not just because books for review are always exciting, but also because I was totally quoted in the reviews in the inside of Shadow of Night. I'm going to be starting The Book of Life next and I'm really quite excited!

OK and so now, onto my amazing birthday and baby presents! This bit is quite overwhelming really. Since moving to Kent and having babies I've sort of lost touch with a lot of the friends I'd had for years - either we have nothing in common anymore, or they've just stopped calling/texting/coming to see me EVER and I've got sick of making all the effort. Obviously there are some lovely ones who have stuck around, and one of my best friends who's in Australia but still manages to keep in touch more than some people who live down the road, but for the most part the people who have cared the most in the past two years have been the ones I've met online. These are people that I no longer consider 'online friends' but just friends. Because they do things like read my blog posts and send me cards so I know that they've noticed I'm feeling down and they care about it - thank you Charlotte :-). And find copies of Peter Duck in shops and post them to me because they know I'm looking for it. Katie, you're awesome. And when I have birthdays and babies they overwhelm me with cards and parcels and lots and lots of Waterstone's giftcards, and it's awesome. I didn't take pictures of all of the cards/giftcards, but I've been taking pictures of the stuff I've got with my birthday money and some of that will be in this post. Today I bought Fangirl by Rainbow Rowell and Tiny Beautiful Things by Cheryl Strayed from Waterstone's online but obviously I have no pictures as they've not arrived.

Anyway! There was a day when we came home to an epic amount of parcels. If you want to see a picture of how my face looked, read my Ninja Book Swap post. Three of the parcels were from Hanna and one from Laura and they were all amazing. This is the combined total - it barely fit on my table! 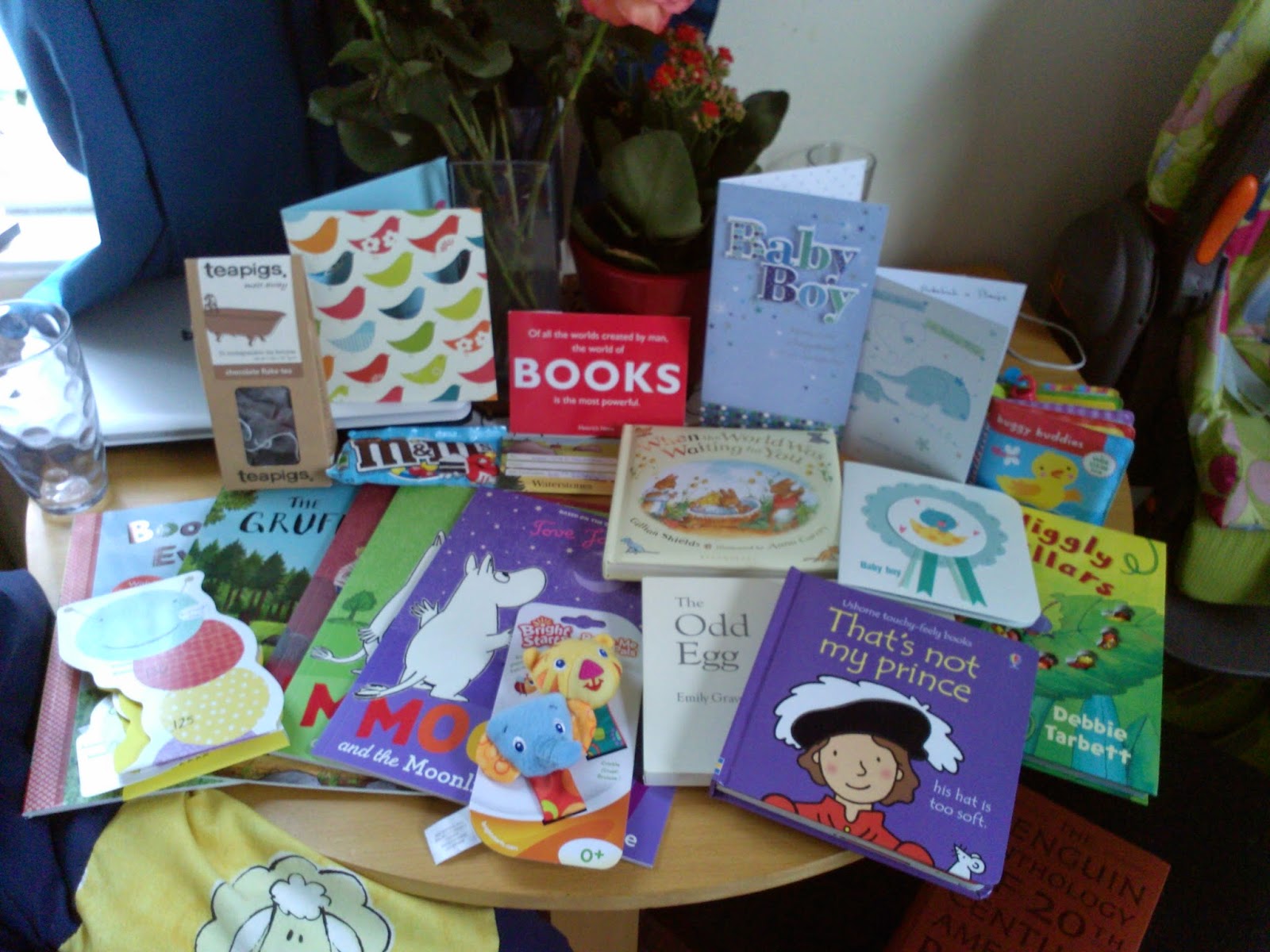 One of the parcels from Hanna contained my birthday presents - Teapigs Chocolate Tea which is pretty much the most relaxing tea I've ever drunk and just thinking about it makes me want some *toddles off to make chocolate tea*... Birthday Cake flavoured M&Ms which are seriously amazing, and a Waterstone's giftcard which I have yet to spent :-) Pretty much the perfect presents for me! Then there was a parcel for Benji, which was Ten Wriggly Wiggly Caterpillars which he absolutely adores! He already has Ten Tiny Tadpoles by the same author and is obsessed with it, but I don't think Hanna even knew that so she must be psychic! Finally there was a massive box-shaped parcel. When Benji was born Hanna totally surprised us (and made me cry a little) by sending a shoebox full of gifts for him, all of which were amazing and so thoughtful (and the parenting book she sent, Politically Incorrect Parenting by Nigel Latta, pretty much saved my life in the first few weeks, as well as being responsible for Benji sleeping at night), so I suspected she'd done the same for Sam and I was right! This is how the box looked before I unpacked it: 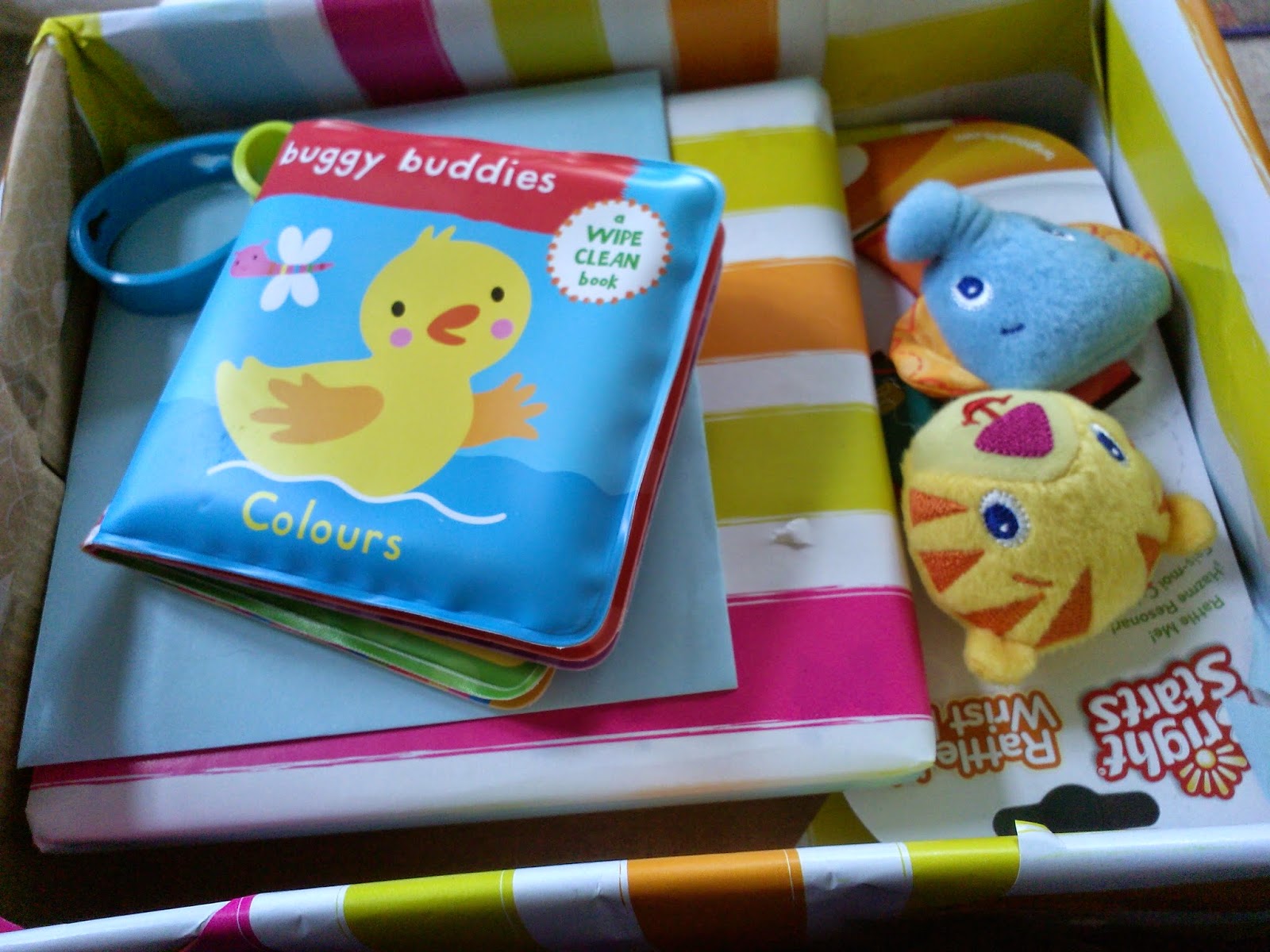 And when unpacked it contained the buggy book and rattly wrist animals you can see on the top, and a lovely card plus board book copies of When the World Was Waiting for You, The Odd Egg and That's Not My Prince. I've already read the first two to Sam while feeding him at stupid o'clock, and the That's Not My book is being hugely enjoyed by Benjamin who is a massive fan of the series.

Then once we were done opening Hanna's parcels we opened this lovely one from Laura, who had already sent me a Waterstone's giftcard for my birthday, and who I knew was sending some books she'd bought for the kids but I didn't know what (apart from a back-up copy of The Gruffalo for when the one we have - which she also bought us - gets destroyed!). What was in the parcel was a super-cool card which is also a height chart and is currently on Benji's wall, and The Gruffalo plus an awesome book called Books Always, Everywhere! for Sam, and three Moomin books for Benji which are absolutely beautiful.

Yesterday I was sat at home feeding Sam (pretty much all I do at the moment is feed Sam) and another big parcel was delivered. This one was from Ellie and because I knew it was coming I didn't even manage to get a picture of it all wrapped up before I went mental. She'd colour coded the wrapping paper - silver paper for the baby presents, purple paper for my birthday presents - and sent awesome cards which I really love both of. Her gifts were also so thoughtful. It really is amazing how well people you've only met a handful (or in Ellie & my case, once) of times can know you! Here's what I got: 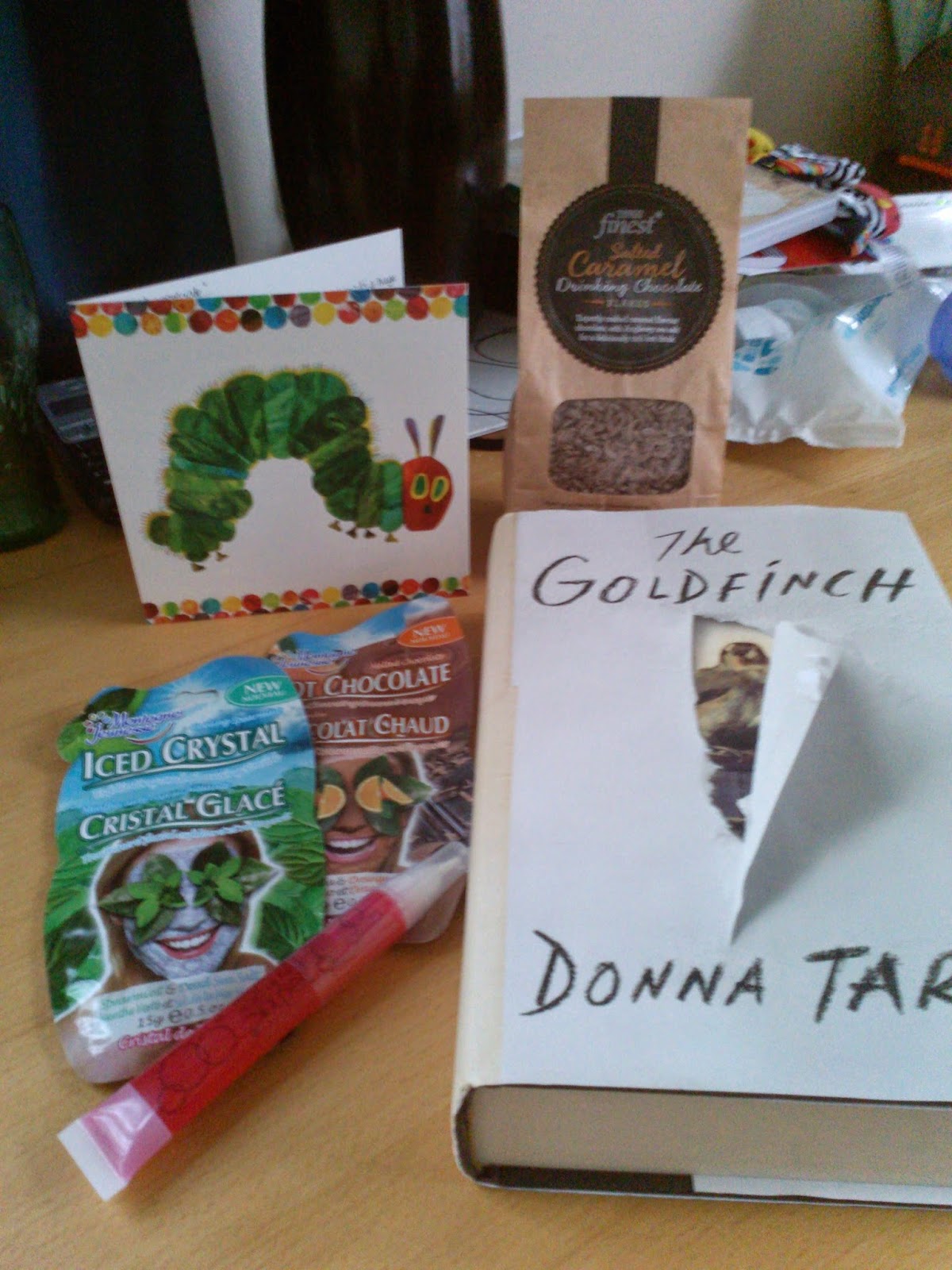 So firstly a Very Hungry Caterpillar card because that's the book she sent Benji when he was born (and because we both relate to the Caterpillar a lot), and then some amazing smelling Salted Caramel Hot Chocolate which I cannot wait to try (I'm literally waiting for Rhys to get back from work so we can have some), two face masks which you can't imagine how excited I am about, some lovely smelling fruity lip gloss aaaaaaaaand The Goldfinch by Donna Tartt!! I squealed a little bit when I opened it because I really loved The Secret History and I'm so excited to read this!
This is what the boys got: 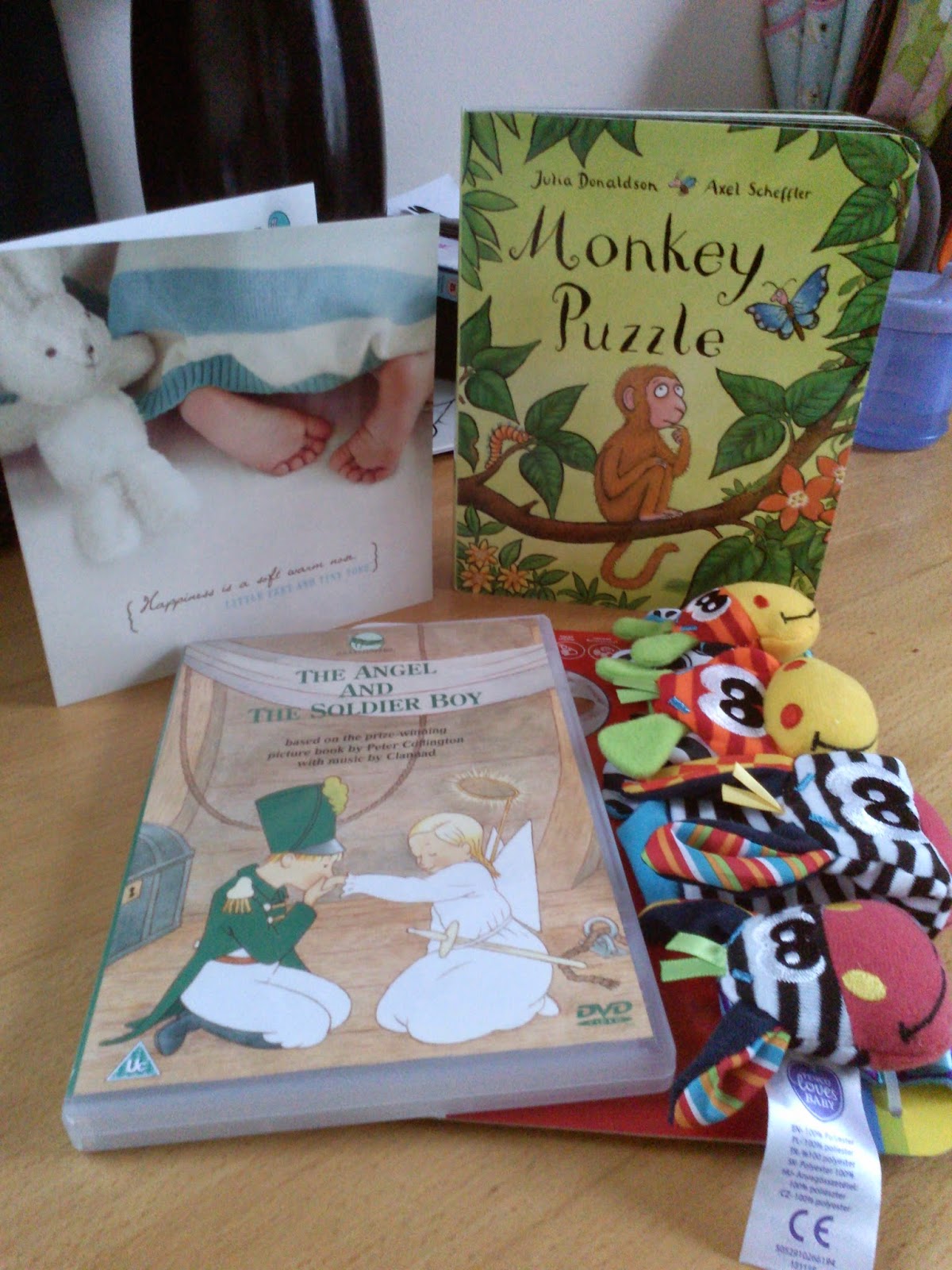 Wrist and ankle animal rattles (which it totally doesn't matter that Hanna also got because now he has variety!), the board book of Monkey Puzzle by Julia Donaldson & Axel Schefler (who are firm favourites in our house) and a gorgeous DVD called The Angel and the Soldier Boy which I'd never heard of before but which Ellie loved as a child and she is right, it's like The Snowman without the crying. I think it will become a favourite here and I so love that she's passed on something that she and her family love so that our family can love it too :-)

Finally I was given some money by my Grandma and my father-in-law, and I spent a bit of it when we were in Waterstone's in Bluewater the other day. This is what I got: 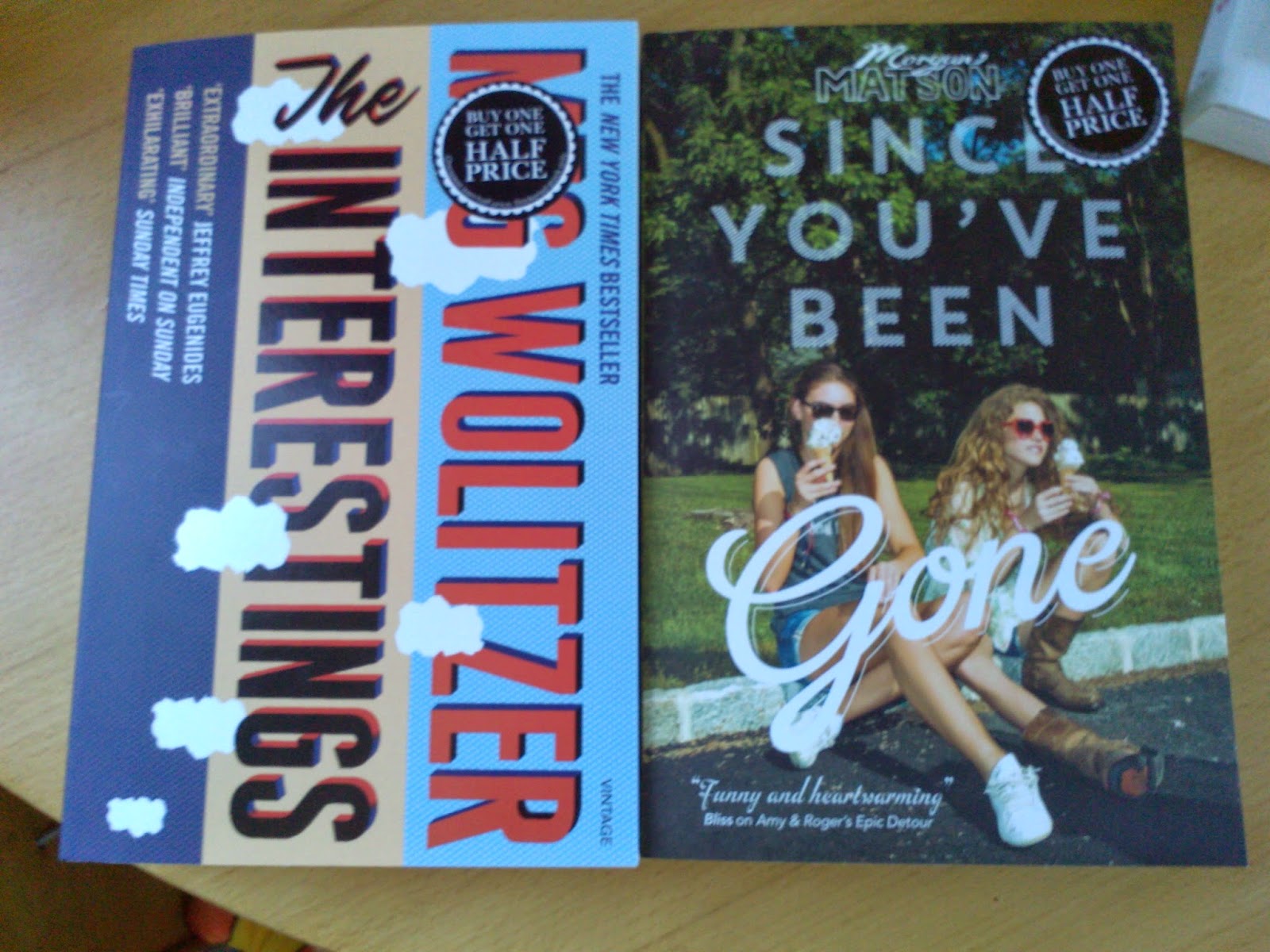 As you can see, they were both on the 'Buy One Get One Half Price' offer and I read The Uncoupling by Meg Wolitzer and really enjoyed it, and also read and loved Amy and Roger's Epic Detour by Morgan Matson so that's pretty much the reasoning behind both of those. That and the fact that I was trying to shop off-wishlist because Ellie's parcel hadn't arrived yet and I didn't want to duplicate!

Sorry that was so long, but like I said, it's been a busy month and I have awesome friends! Thank you so so much to all of you, and to anyone who's actually got all the way through this post! :-)

Have you read any of my books? Where should I start?
Posted by anarmchairbythesea at 19:55