A Tale of Two Cities: The First Bit 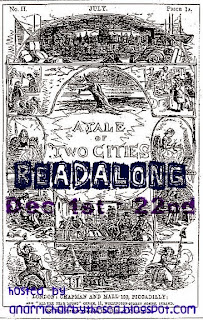 Right, so some of you guys will know that I am no longer the greatest at writing reviews, and so the greatest thing about a readalong is that at no point do I have to write a review as such. These are just thoughts and questions. I did a little background reading for this post (by which I mean I looked up 'A Tale of Two Cities' on Wikipedia. Obviously) and discovered the following:


So there's that... Judging from Twitter this week (and if you want to follow/join in with the debate use #dickensindecember) I am the only one who enjoyed Book 1 of this novel. I think it was starting off reading that famous opening, which has to be one of the most famous in literature surely? I think for me it just moved a lot quicker than the other Dickens novels I've read, and although there was a lot of description, I really enjoyed it. The second chapter of book one which is all about people travelling to Dover in a coach by night I found really atmospheric and quite gripping and  by the time we reached the end of book one I was quiet excited about the story. I liked how much had happened in the first six chapters. It was unexpected, to say the least.

Having said that, the only character I really liked in book one was Madame Defarge. My knowledge of A Tale of Two Cities is pretty much limited to a general idea that it's about the French Revolution and also some character names are familiar, but for some reason I kind of feel like she might be the bad guy/the one who gets everyone killed? But anyway, I love how she just sits there and knits and says nothing and yet is clearly in charge of everything. It's awesome. The rest of them were a little bit meh to be honest. I liked the storyline and the description more than I did the characters, and that hasn't changed all that much in Book Two except that now there are some characters that I can't make up my mind about - mostly Sydney Carton and Charles Darnay, which is funny as they are clearly meant to be opposite sides of the same thing. I think we're probably meant to like Darnay and dislike Carton but I'm just not sure yet. I've avoided reading the character descriptions and synopsis on Wikipedia because it will ruin the fun of reading this back in two weeks and going 'oh my God how could I have got it so wrong?!'.

I have to apologise for choosing possibly the worst point ever to make you all stop reading for the week! Hopefully nobody finished on Tuesday or anything and has had to wait since then, if you have then I'm sorry, but I've got to say I'm kind of glad the Marquis is dead, because that guy was clearly a knob.

And thus end my thoughts for this week :-) Eloquent, aren't I?

Link up your posts here, or put your thoughts in the comments! Thoughts are welcomed from those who have not read along with us but who have thoughts to share!